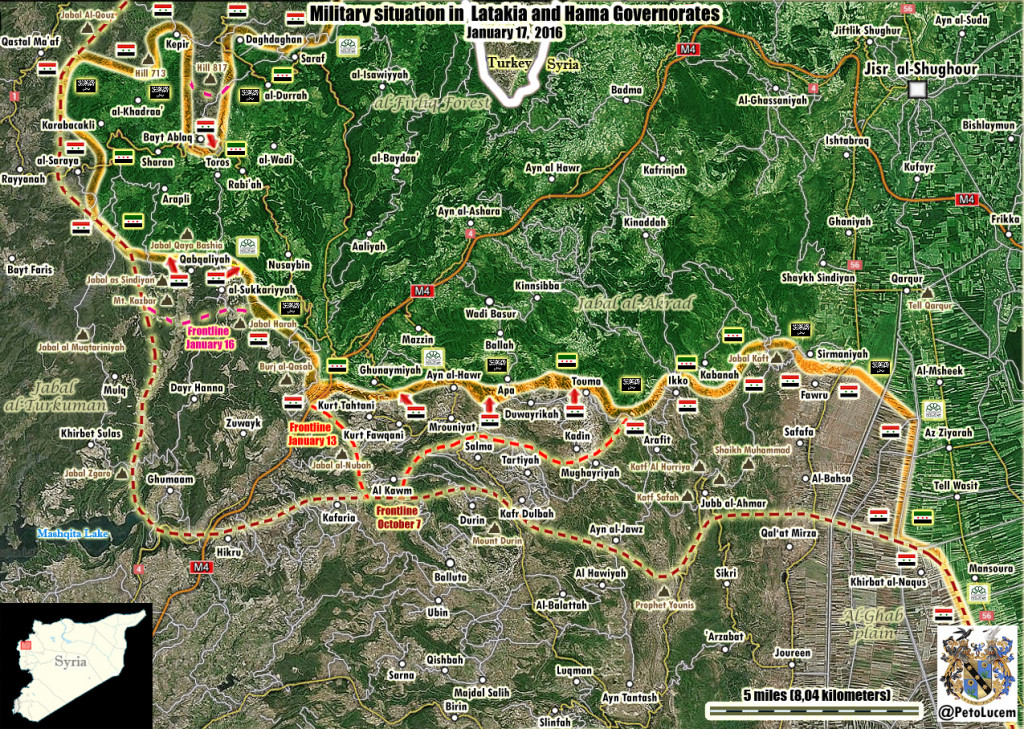 Some analysts have expected the defense capability of insurgent forces in Latakia Governorate would diminish with the fall of their most important stronghold of Salma, which was liberated by the Syrian Arab Army (SAA) on January 12. They were proven right. The last few days saw a dramatic decay in the enemy’s abillity to keep the advancing army forces at bay. Thus, the 103rd Brigade of the SAA, supported by elements of the National Defense Forces (NDF) and other formations, achieved a series of stunning successes and advanced deep into the enemy’s territory, which has been under firm insurgent control for more than 3 years.

After the fall of Salma, the SAA did not halt their advance. Instead they capitalized from their recent successes and kept up their momentum. Between 13 and 15 of January the SAA seized the villages of Kadin, Duwayrikah, Mrouniyat, Kurt Fawqani and Kurt Tahtani. It seems like the army focuses on the central sector of the operation area to prevent insurgents to dig in after the fall of the nearby town of Salma. Another reason for this offensive could be the fact that the SAA wanted to shorten the frontline here, to allow a future attack of the important town of Al-Sirmaniyah in the northern al Ghab plains. This important village is located approximately 5,5 miles south-west of the town of Jisr al-Shughour, which was captured by the insurgency last April.

January 17 saw another series of stunning SAA successes. During these attacks the army imposed control over Sindiyān and Kazbar hills near the insurgent-held village of al-Sukkariyyah. With these two important locations under the SAA control, the position for the increasingly disorganized insurgent forces in Latakia have became untenable. Only some hours later, al-Sukkariyyah also fell to the SAA.

Simultaneously to the attack on Sukkariyya, the army launched an assault on the insurgent positions near their last remaining stronghold in Latakia Governorate: the town of Rabi’ah. The nearby village of Bayt Ablaq fell swiftly after a short skirmish with disorganized insurgent forces.

If Rabi’ah, the village of Toros and Qaya Bashia mountain, located approxamently 1,5 miles to the south-west fall, remaining insurgents in the Sharan area (west of Rabi’ah) will be cut off. A total collapse of the remaining enemy forces in Latakia Governorate will be most likely the consequence.

Great analysis as usual. Thanks Peto

ISIS will be history in Syria by the end of 2016. Too bad Iraq doens’t have the balls to invite Russia to help them and still stick with the twofaced US.

Iraq did invite the Russians publicly back in November of 2015, Russia responded they were considering the request. This led to a panic by the west who scrambled to inject their forces into Iraq ( US, France, Britain, ).