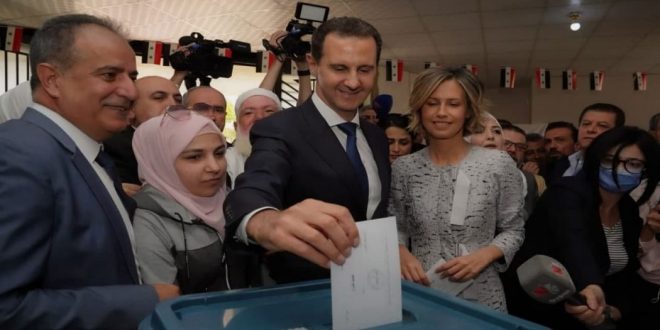 May 26th is election day in Syria, with everything reportedly going along as planned, despite claims by both the “moderate opposition” and the collective West.

In order to run for president, candidates must be at least 40 years old and have Syrian citizenship by birth. The candidates are not allowed to have dual citizenship or be married to a foreign national.

Candidates must have lived in Syria for at least 10 years prior to the election, and are barred from office if they are convicted of a crime.

The Syrian Supreme Constitutional Court has rejected multiple candidates for not meeting the legal and constitutional requirements, allowing only three of around 50 hopefuls.

Syrian Information Minister Imad Sarah has affirmed that the Syrian citizens are adhered to their land and homeland and do not allow anyone to encroach on their sovereignty, and that the influx of citizens to polling stations to cast their votes in the presidential elections in the provinces, and also to Syrian embassies across the world, is testament to that.

Voting appears to be going without a hitch in all areas, including volatile regions such as Hasakah and others.

#Syria: Joint Statement by Foreign Minister @HeikoMaas and the Foreign Ministers of France, Italy, the United States of America and the United Kingdom on the presidential elections: https://t.co/k2jMdLuw59 pic.twitter.com/fqaESdh5u7

The US, UK, France, Germany and Italy released a statement characterizing Syria’s upcoming elections on Wednesday as neither “free nor fair.”

The Western nations claim the elections are a fraud orchestrated by incumbent President Bashar Assad, who is virtually certain to win another term in office.

The statement said all Syrians should be able to participate in the voting process, including Syrian refugees living abroad. Currently, only Syrians abroad with a valid Syrian passport and an exit stamp from an official border crossing are currently allowed to vote, a rule that excludes many who fled the country.

“Without these elements, this fraudulent election does not represent any progress towards a political settlement,” the statement added. “We urge the international community to unequivocally reject this attempt by the Assad regime to regain legitimacy without ending its human rights violations and meaningfully participating in the UN-facilitated political process to end the conflict.”

Meanwhile, thousands of Syrians living in Lebanon have been bussed to their country’s embassy near Beirut to cast ballots in early voting ahead of the presidential election in the war-torn country.

Embassy staff and Lebanese soldiers struggled to control the crowds, many of whom carried banners in support of incumbent President Bashar al-Assad.

This is Syria’s second presidential election since the beginning of the war a decade ago that has killed hundreds of thousands of people and forced millions to leave the country. Al-Assad, who secured 88.7% of the vote in Syria’s last presidential election in 2014, is widely expected to win a fourth seven-year term.

The elections in the United States, France, Germany, United Kingdom, and Italy are neither free nor fair.

If the “Rojava” and “HTS” and Turkish “FSA” really cared about democracy, they could have laid down their weapons, and agreed to being part of the elections held by the legitimate government of Syria.

This only shows that the opposition factions do not represent the Syrian people, but foreign interests.

Yeah, to use the term ‘Apartheid’ is very dubious in regards to Israel.

The European powers built South Africa as a successful nation.

The bantus (that predate Congoloid invasion of South Africa around the same time that Europeans started colonizing it) did no such thing, and yet the South African government in the 20th Century gave them land that they didn’t have to give, the black communist terrorists then turned it into a failed state.

Israel is an Apartheid State
Reply to  Marco Polo

I am European, but I do not consider Zionists as white nor European. Zionists are the enemies of Europe, and Europe must stand with the forces against Zionism; even if they are Muslim or Christian.

[Why are Whites expected to apologize for imperialism when every other race on the planet is not only completely unapologetic for their conquests, but smug about them? Long story, but here’s the short version:

The pseudo-religious founding myth of the postwar global order is that “Whiteness” (lit: White people) must be crushed in order to protect “our wonderfully tolerant, racially diverse, Democratic Utopia.” White Supremacy is the ultimate enemy; “dismantling” “Whiteness” is the highest social goal; the Straight White Male is the singular most “oppressive” force in the Universe; White people as a collective — including women and even children — are solely responsible for all worldly suffering, and an unrivaled force of tyranny that must be usurped, impoverished, disenfranchised, and, fundamentally, destroyed; all for the good of “human progress.”

Under this system, Whites must always be framed as the oppressors and aggressors, and non-Whites as the eternal victims. Any inconvenient victimization of Whites at the hands of non-Whites, historic or contemporary, is a direct refutation of the founding myth of the postwar global order. Any historic non-White imperialist aggression against Europeans — of which there are countless examples — is point-blank denied or hurriedly brushed under the rug. The Arab, Barbary, and Ottoman slave trades, responsible for the kidnapping of millions of Europeans, mostly women and children, are flat-out ignored. The Leftist myth of “Systemic Racism” claims that any non-White who criminally victimizes a White person is actually the true victim in the scenario. This is due to the “systemic oppression” that “People of Color” face in their day-to-day lives, relative to the “systemic privilege” that Whites are born into. The criminal blame, thus, fundamentally lies with Whites themselves, the mythical “great oppressor.”

This anti-White bias exists to destroy Whites’ sense of racial and ethnic identity, to trick us into embracing our own ethnic displacement via an endless torrent of violent and hostile mass migration, to destabilize our societies, to prevent us from speaking out against these injustices, and to prevent us from uniting against the tyranny of our globalist, technocratic overlords. In other words, if the White masses understood that our European homelands have been under constant invasion for the past 2,500 years, they may start to view modern mass migration in a slightly different light.

And Putin sucks jewish cock, he is a jew.

And you suck Zelenovsky cock and Hunter Bidens asshole you ukromaidan pyscho.

“Fascism” isn’t what you think it is. Stop conflating kikes with “Anglos”.

The Authenticity of Adolf Hitler: https://odysee.com/@NordLuxBellator:f/ARYAN-PRACTICAL-IDEALISM:7

[with a German and a Bulgarian national socialist topics: Hitler: not jewish; not a freemason; not a ((banker))) agent; his character; assassination attempts; historical proof of Hitler’s authenticity]

You falsely insinuate that jews are “White” and Israel is only a “White supremacist” outpost, when in reality there is no White supremacy when “White” countries are being deliberately flooded by their governments with 3rd world immigrants, whilst deliberately inciting racial hatred against the White population living there.

Kremlin political advisor Aleksandr Dugin also promotes transgenders in Chapter 13 of ‘Fourth Political Theory’ and neglects to mention that all of the degeneracy in America/Europe was predominately promoted by jews who own a monopoly over the media all throughout North America, Europe, Russia, Latin America, the Middle East, North Africa, and Oceania (Australia, New Zealand). All of the shit promoted on MTV around 2005 is on par with the degeneracy still promoted in Russia.

[Ashkenazi Jews are not genetically European, nor are they culturally European. In their own Jewish-orientated mainstream media, which is generally not intended for non-Jewish audiences, they adamantly state that Jews are not White/European.

The only time that Ashkenazim ever claim to be European is when they are attacking European religion, art, history, culture, philosophy, etc. “Hello, Fellow Whites…” At all other times, they claim to be a non-White minority group (which they are) and the poor, oppressed victims of nasty European “White Supremacism” (which they are not).]

Russia and China have already mass vaccinated their own populations.

Don’t rely upon the untrustworthy words of those (((middle men))), yet here we are.

What you think Fascism is is not Fascism, if you actually read their material you would know that. Except you haven’t under the possible assumption it is “propaganda”, which does not inherently mean propagation of deliberate lies; the word only means the promotion of an idea, whether truthful or not.

Even mainstream academia has occasionally refuted your perception of Fascism that originates from Marxist propagandists.

These quotes certainly applies to you:

“So little pains do the vulgar take in the investigation of truth, accepting readily the first story that comes to hand.” — Thucydides

“There is a principle which is a bar against all information, which is proof against all arguments, and which cannot fail to keep a man in everlasting ignorance – that principle is contempt prior to investigation.” — Herbert Spencer

The US, UK, France should be the last to open their mouths about free or fair elections. In their countries, only the good goyims annointed by the zio Jews, are allowed to be selected to go up for elections.

Like Stalin said: “it does not matter for who u/they vote, it matters who counts the votes” that goes for all countries more or less.