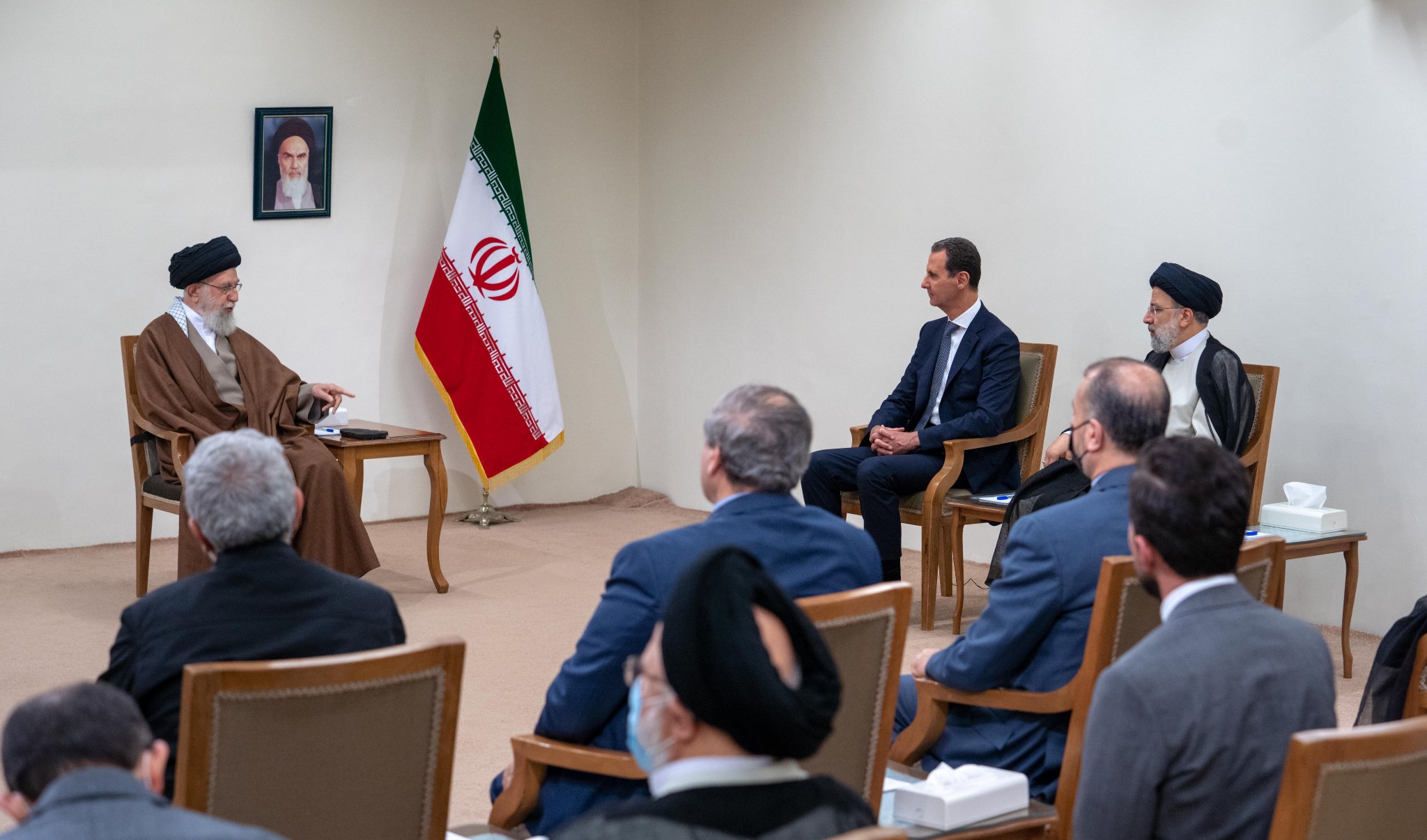 On May 9, Syria’s President Bashar al-Assad made a surprise trip to Iran where he met with the country’s Supreme Leader Ali Khamenei and President Ebrahim Raisi.

This was Assad’s second official visit to Iran since the Syrian war erupted in 2011. The Syrian President first visit was in February 2019.

During the meeting with Assad, Khamenei called for further improvement in the already strong relations between Iran and Syria.

“Efforts should be made to improve relations between the two countries more than before,” Khamenei told Assad during the meeting according to his official website, Leader.ir.

Khamenei went on to say that Syria’s “credibility” was “much greater now than in the past” and it was being looked at “as a power” today.

“Syria today is not the same as pre-war Syria; although there was no destruction before the war, the respect and prestige of Syria is much higher now than in the past, and everyone looks at this country as a power,” Iran’s Supreme Leader said.

Assad noted during the meeting that the “strategic relations” between Iran and Syria stopped Israel from “ruling the region”.

“The course of events proved once again the correctness of the visions and approach that Syria and Iran have followed for years, especially in the face of terrorism,” the Syrian Arab News Agency quoted Assad as saying during his meeting with Khamenei.

From his side, President Raisi said that Iran has a “serious will” to develop its relations with Syria, especially economic ties and trade. The president went on to vow that Iran will support crisis-stuck Syria and its people, adding that “any suffering to Syrian is a suffering to Iran”.

Iran has been one of Syria’s biggest allies for more than two decades now. Tehran’s military and financial support enabled Damascus to overcome much of the problems it faced after the start of the war. However, the presence of Iranian forces in the country triggered a violent response from Israel.

Assad’s visit to Iran came amid reports of a near agreement between Iran and the US on the revival of the 2015 nuclear deal. Syria is posed to benefit greatly from the revival of the deal as it would bring about the end of the US maximum pressure campaign put in place by the former Trump administration.

“Syria today is not the same as pre-war Syria; although there was no destruction before the war, the respect and prestige of Syria is much higher now than in the past, and everyone looks at this country as a power,” Iran’s Supreme Leader said.

He’s correct, and many people seem to think that the Syrian army is done. If Syria exposes how much Russian jets, air defence, missiles, soldiers etc. Syria military will have a great boost up the ranks. Syria also has engineers from North Korea, China, Russia, Iran and Hezbollah working with Syrian engineers.

Syria only problem is their army is too exposed and filled with pro-FSA soldiers and commanders, hopefully they get weeded out soon

Prince of Piece
Reply to  Jnoub

there are two illegal US bases in Syria. only when they close up shot is Syria secure.

But the great Ayatollah didn’t say about what they will do in a Turkish invasion. Maybe the hook nose of Khamenei will laugh.

Said all the US stooges..

Most of those clowns are gone by now.

Russia, Syria and Iran are forging ahead. Truth will prevail.

I guess assad knows that russian soldiers in syria might soon be needed on the homefront and he will probably ask iran to replace them.

They gave the women their women and demanded them to shoot anyone they wish.

Now there are no children in solidaity with Luhansk

There are only a few thousand here and several tens of planes and helicopters, it’s small part of total numbers, so I guess they stay here in Hmeimim.

The World says to the Western countries “the G7 Criminals must go!” Lets see how long the G7 lasts

“Out of Russia again comes the hope of the World” Edgar Cayce, The American Sleeping Prophet 1932

Good prophecy, but I prefer to believe to apostle John the Theologian. These days I read interpretation of the Apocalypse, it’s very interesting and modern book alike today’s newspapers. Globalization, government of anti-Christ, 10 strong states under his rule, christians who reject Christ (Christmas is X-mas now or even “winter holidays” in western states, cross and Bethlehem star is prohibited in some places, people who wearing necklace with cross can lose their job).

Again, the world is changing, the center is sliding into the east, and hopefully, the Arab world incl Iran follows, pity with the Americunts whom is going to destory Pakistan, but for the Arab world, the west is going into free fall, and will go total retard, along with the Imperial banana republic uSSa.

So, since we are debating other regions, I have a video to you all, The J. Dore show with Hermela Aergawi and the focus on Ethiopia and what really happened and by whom, of course, its again the same scrap book, by the same forces we encounter to day in Ukraina. Everything we expirience here, happens and happened, regarding Ethiopia. Watch and learn. https://www.youtube.com/watch?v=qEGoIO4K9cY&t=256s

It might be some kind of trade. Assad seek asylum in Iran and Khomeini seek for asylum in Syria.

Like elensky and putin,in putins case that will very much make his day,even closer to rome!

Who must go? Putin will get away with war crimes, butchering Ukrainian civilians, genocide and ethnic cleansing large areas of Ukraine just like Bashar Hafez Al-Asad did in Syria because the US, NATO and the West are led by poor, old, senile, dementia Joey.

Get your hand off it tossa,the evidence is 1000 to none in Russias favour,hearken up,dud! Congratulations russia =V= day, to hell with soros/gates/cia/nazis bio labs and the new world orderly diseased:

Politics 101 in Asia Minor and the Levant. What would happen if Syria, Iraq and Iran starts to work together in military and security. Israel in the south would not like this, also Turkey Empire in the Northwest will oppose to this alliance, then you have USA ocupation in Syria and Iraq, then you have SaudiArabia and the Emirates. This is why is so hard to have good relationships with your neighbors on the MiddleEast. Every other external power would be jealous and would try to divide using covert ops or black ops false flags. Remember Machiaveli “Divide and Conquer”.

The case is not like that. For example, Iran dislikes Iraqi Ba’athists and likes Turkey. lol

Rubbish. Iraqi bathists are extinct. And turks are called ‘khar’ in Iran…….Get real. I personally like the term ‘guppu’ for the turks, cuz theyz half chinku.

Let the cho$enite abomination in apartheid, occupied Palestine never forget that it will pay dearly for the terror it has unleashed on the people of the ME and all the demons it can muster from its dying Golem USSA will be of no more help than its child murdering thugs in the so called khaZar “defense forces”. Israhell and chosenite, occupied USSA is the most evil excuse for a nation on the planet today. However, with the collapse of the Saudi Mercan dollah the welfare warfare entity will be washed from the pages of history. The free lunch will soon be over.

Russia, Belarus and Serbia accept the existence of Israel. lol

Ruling 12# It is not permissible to have intercourse before (her) being 9 years old, be it permanent or temporary marriage. And as for all other pleasures, such as lustful touch, embracing, and thighing, there is no problem in it even with a suckling infant. Tahreer Al-Waseela, vol. 2 – Khomeini https://www.leader.ir/ar/book/13/pdf/download

Sorry guys, but no matter how much the US is “bad”, siding with Satan shouldn’t be an option.

You are in a hurry to label to somebody as Satan… maybe Satan is already in your head hiding as your alter ego that was forged while you were consuming all the western msm propaganda and soft mind control techniques of the internet… You should understand they exists already and there are other countries and also another cultures (way of living) and they have a way of being rules and laws different in other parts of the world. Maybe you should try to understand better others cultures and religions instead of putting so fast others a label.

Also your way of thinking is so WESTERNER using just one single example to discard an entire live, all the live Khomeini had to walk in front of their people, follow traditions and culture and have to obey the laws and religion of their land. I put an example your mind could understand… if you were Khomeini just a day… i guess the Arabs would realize some devil gets into Khomeini and stone them to dead.

This is what I like to see! I just wish Assad would tell the useless Russians to go on home (and take their one S-300 with them!)…stop letting them take credit for shit they’re not doing.