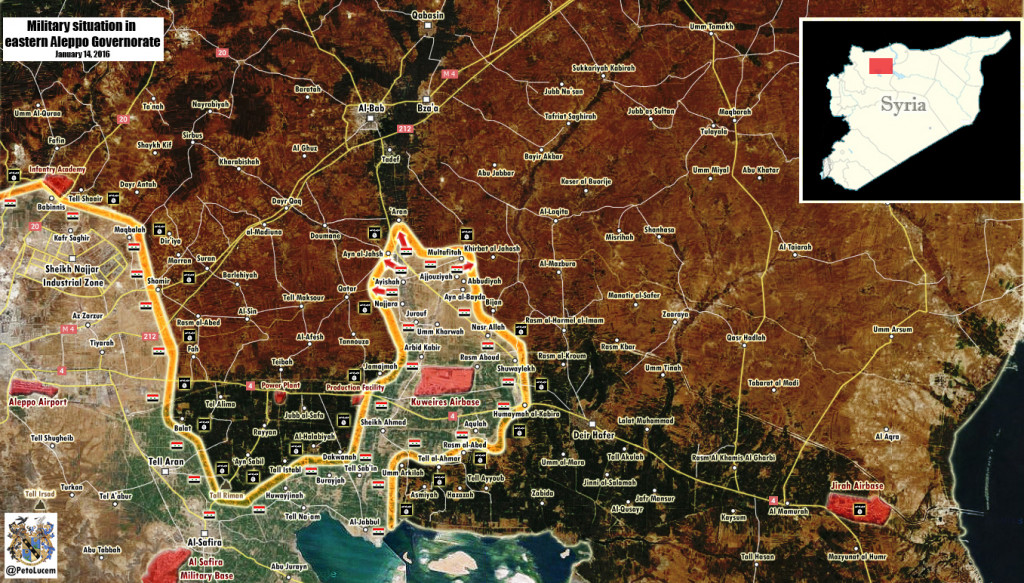 On Sept.15, the Syrian Arab Army (SAA) commenced an offensive aimed at breaking the two year siege of the Kuweires airbase located in the eastern Aleppo countryside. Less than two months later, the Syrian troops, spearheaded by the so called “Tiger Forces”, an elite formation of the SAA and led by Colonel Suheil Al Hassan, broke the siege imposed by ISIS militants and were welcomed by the 300 men strong garrison of the airbase.

Many observers have expected that the SAA will establish defensive positions near the airbase to allow Syrian and Russian airplanes to redeploy to Kuweires. Some also anticipated the army will widen the narrow corridor, which allowed to lift the siege from the embattled airfield. However, everything turned out differently.

As anticipated, the SAA liberated numerous small villages and farming areas near the airbase. But it also commenced pushing northwards, towards the important city of al-Bab, which serves as significant logistics centre for ISIS and which can be considered as their most important stronghold in the whole Governorate. On Jan.10, the government forces liberated the village of ‘Ayishah, located only 6 miles to the south-east of Al-Bab. On Jan.14, the SAA captured the villages of Surayb, Ajouziyah,‘Abboudiyah, and Miltafah.

What can we expect after this bold advance towards al-Bab? Looking at the map, the corridor which was so far liberated by the army still seems quite narrow although recently army advances – especially on Jan.14, hint the SAA’s attempts to widen it at least a bit before continuing to advance North. Now the army has several options how to capitalize from the apparently weakening ISIS formations deployed in the area:

2. Halt the attack and allow ISIS to pull back their battered forces. It will help to shorten the frontline and hit retreating formations with a superior fire power.

3. The 3rd is the most promising but also the most complicated option. The SAA may launch an attack from the Sheikh Najjar industrial City and march north east along the M4 highway in order to link up with allied forces currently deployed approximately 4.5 miles south-east of al Bab. Thus, a large amount of ISIS militants would be under siege in a large pocket of approximately 15 miles diameter. This option would require a significant amount of manpower. Although recent information indicates a build up of forces by the SAA and its allies in the Sheikh Najjar industrial City, it isn’t clear yet which aim they have. 11 miles to North West of the Sheikh Najjar Industrial City, in the towns of Nubbol and Al-Zahraa, approximately 35 000 civilians are besieged by Al Nusra (Syrian branch of Al Qaeda) and are waiting for relief.

There are so many targets that the SAA, even with support from NDF, Russia, cannot do all and also has to have reserves to respond ro what IS, rebels might do.

It would all depend on priorities and alliances.

There could be a practical, non formal alliance with SDF, to first destroy IS, islamists by cutting the Azaz Aleppo route somewhere and by taking Al Bab and Manbij and connect those.

Should that be feasable, the positions of both IS and islamists in the north west will become untenable.

Southfront, congrats for letting Peto Lucem to write analysis for this site, he is one of the best out there that understand this conflict since the very beginning.

Peto, excellent article. I have built some ideas below on top of what you wrote.

The above possible strategy is interesting for Syria since the Al Bab plains are the focal point of 4 divergent forces in this conflict.

1) Syrian terrorists and islamists – used to own all the north for few years, lost mostly to ISIS, this groups is now under tremendous pressure in Azaz from almost 3 sides, their weak position has only one advantage, the border crossing with Turkey that supplies them with unlimited weapons and fresh rats. 2) The Turkish Government is eyeing this piece of Syria land for their NFZ and allocate their Turkmen terrorists and central Asian islamists and finally create a stronghold inside Syria, near Aleppo, that would lately be annexed to Turkey in a probable attempt to take Aleppo, this has been Turkish “dream” since 1920s. This plan is losing grip by the day due to Russian air presence and the advances of the following two forces. 3) The SDF force, primarily made up YPG/YPJ but with a small component of Raqqa Arab tribes/Assyrians, are pushing hard from Raqqa Province toward Manbij and lately to connect to Afrin, creating a powerful “State” within a State and paving the way to a stornger position in the negotiating table with the Syrian Government. 4) The allied forces lead by the SAA, after liberating the siege of Kuweires, the allied forces, against all predictions of going east or west, decided to concentrate forces and go north toward the critical town of Al Bab, by doing that the allied forces may have made a decidion to counter all the above scenarios, once Al Bab is controlled, most of the area form there to the Turkish border would be under long range artillery control, meaning ISIS would lose any punch toward Aleppo, SDF would lose completely the “appetite” to connect with Afrin and Turkish would have lost all possibility for the NFZ in this critical area. All of it would be true if an offensive start from Sheikh Najjar toward Al Bab, and one major offensive is about to start in Aleppo, and there is only two ways to go, NW toward Nbul and al Zahra or east…toward Al Bab.

The Arabs in the SDF on the Western Euphrates front are mostly made up of Arabs from that area, not from Ar Raqqa…. There are some Shaitat tribesmen from the Deir Ez Zor area fighting on that front, as well as Shams al Shamal who are from that area with their famous commander Abu Leyla being from Manbij and the other day there was a picture of him with some Shams Al Shamal fighters from Abu Qelqel, a large village on the SDF frontlines……

Great to see finally our own having the possibility to expand his though beyond the 160 characters. Good first article. Certanly the opening of Southern and Eastern battlefronts demonstrate how a non conventional approach can in some occasions greatly facilitate things, while the long snail-like advance on Latakia mountains has proven at the contrary how in some others sadlyremain instead the dire necessity to proceed through a long and bloody demolition of enemy position before to get durable gains.

As I had some discussion with Peto (based o 160 signs) ;))) One important factor: Al-Bab lies on M4 Aleppo – Raqqa highway. Cutting the road = cutting ISIS supply route = lack of ISIS reinforcement to attack Sheik Najjar, if SAA decided to close the gap between Handarat and Zahraa. (and thus leave SJ empty). Syria’s war is a war for roads so it is important. Marcello Gusberti – Eastern part of Syria is easier to conquer to due plains and lots of hamlets/villages. It is also more difficult to defend it. Look at Tal Eis – it is placed on a hill and JaN/Ah-Al-Sham had problem to recapture…Mi

Very nice article by Peto Lucem, a fantastic map maker and a good source for keeping up to date with the Syrian conflict….. I have two questions for anyone interested, firstly, why are Daesh forces so strong at Humaymah al Kabira but their defences have fallen apart south of Al Bab? Also, compared with the astonishing speed of the initial SDF offensive in South Kobane, why is it taking them so long to advance on Manbij?