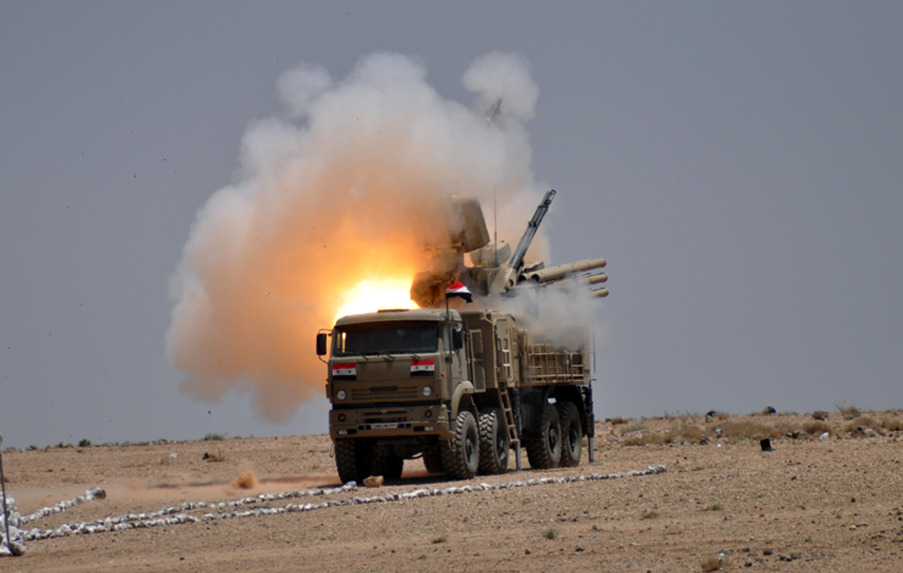 The Israeli strikes, which were launched from Lebanon’s airspace late on August 19, hit several targets near the Syrian capital, Damascus, as well as in the southern countryside of Homs. There was no immediate reaction from Tel Aviv, which rarely comments on its military operations in Syria.

The Lebanese government condemned the strikes and lodged a complaint against Israel for violating its airspace at the United Nations.

According to Kulit, there are no casualties among the Syrian military personnel as a result of the Israeli strikes. Civilian and non-government causalities were, however, reported.

In the town of Qarah, near Damascus, four civilians were killed and three others were wounded. Two pro-government fighters from Homs, who were allegedly linked to Hezbollah, were also killed in an unspecified area.

Kulit’s announcement was not a suprise. A recent report by the London-based Asharq Al-Awsat newspaper revealed that Russian has been working to restrict Israel’s attacks on Syria by improving the capabilities of the SyAADF.

The August 19 strikes on central Syria were a part of Israel’s “War-Between-Wars” military campaign. The campaign is meant to push Iran and its allies out of Syria as well as to prevent them from developing their offensive capabilities. None of these goals have been achieved, yet.

” The new face of Afghanistan’s Taliban rulers owes his freedom to the U.S.

In 2001, Mullah Abdul Ghani Baradar, a co-founder of the Taliban, tried to arrange the group’s surrender to the new U.S.-backed Afghan government. It was rejected. He spent most of the past decade under arrest in Pakistan.

He returns to power 20 years later after the U.S. lobbied for his release when the Trump administration launched talks with the Taliban. At the helm of the group’s political office in Doha, its de facto embassy, Mullah Baradar led talks with the U.S. that culminated in a deal to end America’s engagement in the 20-year war. ”

Last edited 11 months ago by Fog of War
-5
Reply

Sure… they‘re all flashing ghe „CIA-finger“. No situational explanation possible…

I wish I knew what that meant.

” so incompetent you require Jews to govern you…submissive LGBT ”

Putin with his bosses.

Last edited 11 months ago by Fog of War
-1
Reply

Most militaries train people to hold their trigger finger that way , especially if you have one up the spout . Possible that Pakistan military or ex trained them. Who knows with the CIA as I am sure they have units training both sides unknown to the other .

IMHO
Reply to  Fog of War

It is quite obvious that the Taliban now is not the same Taliban that was routed early on. This is the puppet Taliban.

” By their deeds ye shall know them. ”

We’ll see what the Taliban do to the poppy fields. The answer lies there.

Nah. Putin is a puppy. And everyone loves a puppy!

not sure how long israel will last and certainly whatever they are doing is not working out well. iran will likely become a super power encompassing from lebanon and all the way to afghanistan. israel and jews may need another 9/11.

Iran has smaller economy then Germany or France. Are they superpowers ?

the most important elements to become a super power is land mass, natural resources and population. those pretty much determined the war depth. as chairman mao once said, power comes from the barrel of a gun. economy can come and go, but those things never change.

Mao’s China was no superpower either. Being one always involves wealth, lots of it.

1) ZioAmerica does have large amounts of natural resources as well as vast tracts of farmland. They are just being squandered by the corporate oligarchy

2) Who are China’s biggest customers ? Would the Chinese economy be as strong if those customer’s disappear ?

3) Who would buy the bulk of Russia’s oil products if all the Western nations implode ?

4) Russia faces a demographic disaster , just like the West.

Mao was a brilliant strategist but like most military geniuses he was a poor political leader in peace time.

Mao was the right man to lead revolutionary China and in a perfect world he would have relenquished power once the revolution was over but like every other revolutionary leader in history … he didn’t and if you look back at the post war period China was in no shape to transition to a peace time government until well into Mao’s rule.

Denmark is irrelevant country in these matters – a NATO infant that does what it is told, with no impact in any of these major Geo-strategic events.

Well you just made the case that America will remain the world superpower.

You’re a proven imbecile who never has anything concrete to add to any discussion. You are an obvious troll sent here to make Russian people look bad. Go service your boyfriend now fag.

RaptarDriver
Reply to  Fog of War

He’s a proven Zionist homosexual. Probably what is called a Russian Jew.

HB_norica
Reply to  Fog of War

“Superpower” is overused. Iran could certainly become the dominant regional power in the ME. They hold the same mountainous, easily defended territory that allowed them to become an empire in the past. They just signed a huge trade agreement with China and if China can tame the Taliban they’ll have trade routes that can’t be blockaded by the USA or Israel. Iran has huge energy and mineral resources and the Persians are smart people. They are kept poor today by the USA’s dominance of the seas and airspace …. the USA has no power over Eurasian land routes and no way of attacking Iran without taking horrendous casualties.

Fog of War
Reply to  HB_norica

Economies are for those who don’t have intrinsic power.

I concur. A great economic power stands no chance against a great military power.

Iran will not be a superpower. Get real dude.

Welfare is what is destroying the U.S.

Yes, among many other ills. However, to which groups does the bulk of ” welfare ” go to ?

Israel leadership are forever announcing their raids on Syria – mostly as political propaganda. The Israeli right wing Likud hawks (the original Neo-Cons) are convinced such raids will keep them in domestic power, and will project regional strongman image to neighbors. Of course, empty vessels make the loudest noises. And the knockdown rate of IAF attack missiles, by SyAAF air defenses, is always ignored or downplayed by Israeli statements. But that is just part of same Israeli propaganda policy, never admit their losses. Forget the partisan western media and Twitter troll disinformation, Pantsir and Buk systems are very effective defensive counter weapons.

That is called deflect and divert trolling, Jenny. It doesn’t work here. Do stay on point.

1. Likud is not in power anymore. 2. They do not announce raids. They discuss them ex post facto, warning their enemies that more are coming if they keep up their shenanigans. 3. Syrians claim to knock down almost all Israeli missiles, but somehow, IRGC and Hiz depots get blown up and their top men get wiped out. 4. Israel is a democracy with a free press. They cannot hide casualties like Syria can. Even prisoners who die in jail are accounted for (thought sometimes later than others). 5. Cannot comment on systems. I am no expert. But IAF seems to get the target more often than not.

Last edited 11 months ago by Anyone
-8
Reply

Anyone
Reply to  Anyone

Again with the homosexual references. You are clearly a flamer.

A big dog that will eat you dumb Yanks you dumb fck.

If The Resistance is truly united it should introduce a new Rule Of Engagement to declare ‘like for like’ response to israeli aggression. Therein, 24 missiles should be fired at similar targets in israel, and at a time The Resistance chooses. TEP.

Interesting evolution of the BUK system. The info-graphic does a good job of showing the upgrades over the years. Especially note the BUK-2 series, with clearly improved radar and electronics; look how much more compact the radar is, versus the huge dome like thing hanging off the original BUK-1 series. And the BUK-3 looks like it has different missile tubes, reminiscent of ones used in the S-300 and S-400 systems.

Yet he is still your father.

is a just a whore of those pedophile goat fuckers muslims…