The ISIS-linked news agency Amaq claimed that in total 100 Syrian Arab Army (SAA) soldiers were killed. Amaq added that ISIS members killed a Russian soldier and captured 2 others. These claims were rejected by the Russian Defense Ministry.

ISIS had been able to concentrate enough forces for this move thanks to the ongoing Arab-Kurdish tensions in Iraq that resulted in halting of Iraqi anti-ISIS operations near the  border with Syria. On September 25, the Iraqi Kurdistan Region Government held an independence referendum in the area controlled by its forces, including multiple areas that have never formally been a part of the Kurdish autonomy. This led to a large-scale political crisis in Iraq and a diplomatic crisis in the region that could led to a new round of the war in Iraq.

By September 29, the SAA and its allies re-grouped and started a counter-attack in an attempt to regain points that they had lost at the highway. A fighting continued in Ash-Shula and Bir-Ghabaghib. Even when government troops restore the control over the highway, they will not be able to recover the time that they had lost combating ISIS in the area.

Meanwhile, the US-backed Syrian Democratic Forces (SDF) officially announced that it has seized al-Suwar town northwest of Deir Ezzor and started another operation in order to reach and to capture Markada town in southern Hasakah.

The SDF is actively exploiting the fact that ISIS is mainly focused on combating government forces in central Syria.

hahaha I saw this coming a month ago!

Jew ISIS the hope of the USA.

We all did. There is video of SDF leaders begging for an attack by Idlib militants. There’s a quote from a US coalition official questioning “whether or not the SAA can hold what they’ve taken.” So a major attack in the West of some sort was the only move left. Most of the major set backs for the SAA have come after they are allowed to form a long salient, then some counter attack breaks the supply line. The SAA was within 20 miles of Raqqa 18 months ago, then their supply line was smashed with 3 vbeds.

Hopefully these reports are accurate and the situation is under control

These pics are from the T3 area.

I am sorry; but even I do not believe what was stated in the video.

II think this is reverse phycology.

From 2009 US was openly paying al-Qa’ed in Anbar not to attack, what we have here is Camp Bucca take two, but the Kurds are very vulnerable compared to Sunnies, their relying on the sex symbolic jew bitch with a gun thing, I don’t get off on it personally, all my after glow pals in the after life love Rosa Luxemburg, my son gave me a tv and two video players I burner one of them out watching Barbara Sukowa playing Rosa in her 1986 movie, I used to watch it every day but had to stop for of losing my still working but old apparatus.
We’ve done all this before, I think that’s why Allah is messaging me to bipasss the BH as not all that relevant, I can put on a thousand times better show than any mongrel dog with a gun.

In Iraq, it was called the “Sunni Awakening”. It started in about 2007. Billions of $ in bribes were paid to Sunni tribal leaders to hire al-Qaeda fighters to become a “protection force” to protect US forces, so that the US could withdraw from Iraq in 2011 and save face and pretend that their mission was a success.
Later in 2011, the Saudi’s took control of the same payroll system for that “protection force” and sent them all over to Syria for their regime change project. These same al-Qaeda fighters became to core of what later by 2014 became ISIS, all paid for by the US and the Saudis.

Im heavily addicted to watching actual clash footage and combat videos via go pro or news media outlet… r&u videos on youtube, anna newsvideos, Syria War clashes on youtube, LIVELEAK -> syria (this is the best)… i am just wondering if anyone else watches war clips and where do you watch them from? Idk why i have this obsession. Just crazy to see how that part of the world is rt now. Hope there are others like me out there

Mayebe you should see a psychiatrist

I was baked, not heavily addicted jus watch combat footage like 4x a week

I do not believe a word of that; I am sorry.

The Syrian government has made itself vulnerable by becoming overconfident. If they had put more resources in East-Hama that would have been cleaned up long ago. Similarly, the front should have been a straight line between Deir Ezzor and T2, so that it was much easier to defend.

When the siege of Deir Ezzor was ended I was astonished that I immediately heard bragging about plans to cross the river. There was no need to provoke the Kurds and the US who until then had been passive. Instead the focus should have been on expanding control on the West bank of the river.

It may be that the Russians have been a bit too eager to try out their amphibious toys to cross the river.

The Syrian Army has for long time fooled itself to think that they are in some kind of competition with the Kurds. They aren’t. Yet that made them to undervalue the conquest of territory and to overvalue preventing the SDF from conquering specific areas. In fact driving ISIS out of Deir Ezzor province should have top priority. It will free the army up for the hotspots in the West of the country and it will take away the main reason for the US to stay in the country.

The worse things get for US / Israeli foreign policy, the more trolls arrive

Yep agree, Hama pocket should have been tackled long ago when Palmyra was first retaken, T2 should have been taken and the desert cleared in a line.
leave Idlib alone and let the idiots there kill eadh other until IS is dealt with, same with Ghouta.

All terrorist organizations Al-Qaeda, ISIS, SDF, etc fully cooperate and coordinate with each other in Syria.
From the maps and from the situation in Deir Ezzor, Homs, Hama, Eastern Ghouta and South of Syria it is obvious that who these terrorist groups are? What they want and for whom they are fighting and who funding and arming them. A ten year old child can tell you. This is called US proxy war to divide nations and countries in the world.

We must not mention Israel/US not to be called anti-semites. I guess thats why you call it US proxy. 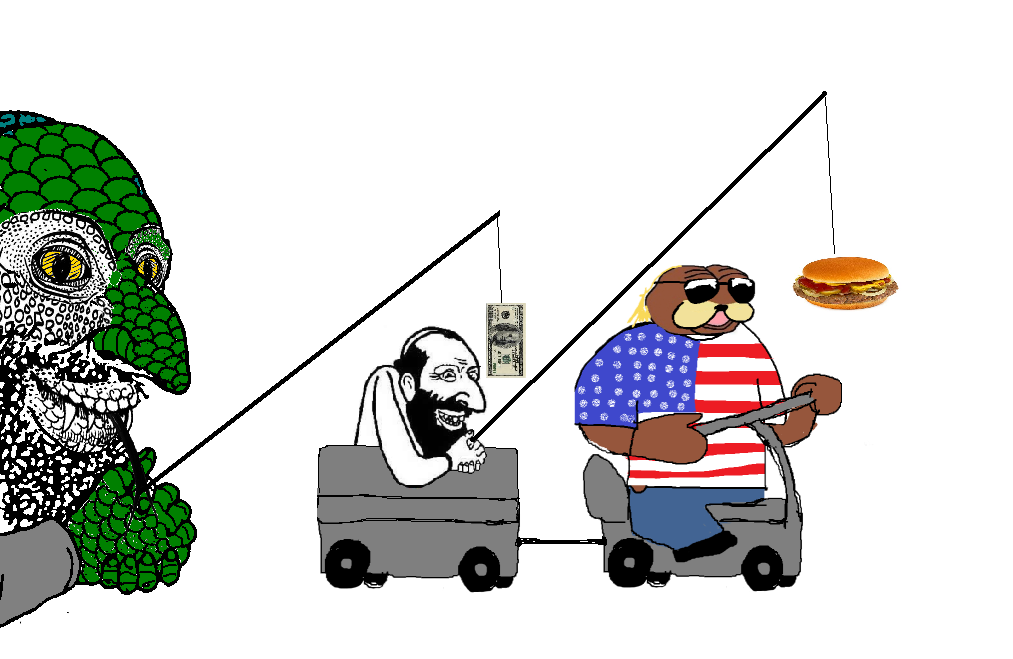 Ha Netanyahus son tweeted this image out the other day LOLOL 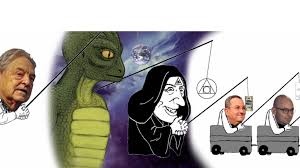 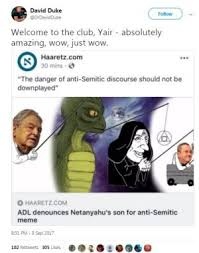 I ask any JEW 2 questions as long as he is so disposed to discuss with me intelligently ( A Miracle, I might add as intelligence is not one of their finer points) : 1.) Do you support Israel AND 2.) Do you follow the Talmud.

A yes to either one of those means he or she CANNOT be TRUSTED. YES to BOTH means, AVOID like the PLAGUE :-)

If they LIVE in Israel the question does not need to be asked. The answer is OBVIOUSLY, YES by virtue of ACTION.

I just dont trust them at all.

Rothschild has virtually UNLIMITED FUNDS to HIRE UNLIMITED numbers of Mercenaries, via his “Useful Idiots” and Stooges, in Governments, as unemployment is rampant on this planet, and I have stated such, numerous times on various Alternative News Sites.

This is a NEVER ENDING War unless Russia and Iran, take out Washington or Tel Aviv or at the very least Jacob Rothschild, himself, as a warning to the rest of the Psychopaths in the House of Rothschild, House of Windsor and Vatican

It may come to that, by accident IF not by design. It will be less messy and destructive, if done by DESIGN.

Everyone who thinks otherwise is living in a Hollywood DREAM WORLD, where all of a sudden those scum will decide they LOVE MANKIND and want PEACE with Humanity

Lord Jacob Rothschild , is in his late 90’s and the chance of anyone taking him out are extremely unlikely . However time is going to fall on him as it does on us all . He might still have an “Enlightenment” , but even if not , his daughter and family hopefully will redirect their financial energy in a pro – life direction . Negativity will only produce more negativity . Take out Washington and Tel Aviv , and you just kill millions .

Become a truly Freespirit , and the power of your free energy can help humanity achieve peace . You are more powerful than you imagine .

We disagree. obviously and I was not talking about the civilian PEOPLE in Washington, simply the Government, as in Tel Aviv

There is more than one way to “take out” someone or thing.

Your mind is very limited, by American or British and Talmudic Education I presume

“Lord” Rothschild. How you British Imperialists LOVE your phony Titles – Slaves of the FIRST kind

Freespirit : ” Lord ” is the title he gives himself , certainly not given by me .
Talmudic education ! ,No , and sorry I don’t live in London or L.A.
Hope you feel a little better after calling me a ” useful idiot” , and a ” British Imperialist ” , a ” slave of the first kind” .
You may be right in that the remainder of the Rothschild family may not become humanitarians , but the point I was trying to make to you , is your spirit energy is powerful , direct it in a beneficial direction and you make yourself and this world better . Best of Luck to you .

He may give himself the name ( which is not true) BUT you don’t need to use it.

GO SAA go! Your are the sons of the soil/ you are the warriors and heroes and Liberators who have the people’s mandate to fights these snakes which are all funded by the same people and countries!Keep exterminating all these snakes!