On May 17, missile sirens were activated in the Israeli-occupied Golan Heights and Israel’s Iron Dome air defense system launched at least one missile. Immediately, multiple speculations appeared over the incident.

Some sources claimed that the Iron Dome had intercepted a rocket launched from southern Syria. Others argued that an unmanned aerial vehicle (UAV) had been shot down over the Golan Heights. However, the Israeli Defense Forces revealed that the incident had been triggered by a false alarm.

Tensions between Israel and Syria reached their peak on May 10 when over 50 rockets were launched on Israeli targets in the Golan Heights from Syria and Israel carried out a massive strike on Syrian and Iranian forces. Since then, the situation has remained tense.

At the same time, the Syrian Arab Army (SAA) is reportedly preparing for a military operation against militants in southern Syria. On May 16, helicopters of the Syrian Arab Air Force drooped thousands of leaflets over the Lajat region in northeastern Daraa calling on militants to surrender their weapons and to accept a reconciliation deal. Such leaflets are often dropped ahead of major advances.

An SAA officer told SouthFront on May 17 that SAA units around Damascus are indeed preparing for a possible military operation in the provinces of Daraa and al-Quneitra. If such a military operation is really launched, it may trigger a further escalation between Syria and Israel. Tel Aviv has contributed significant efforts to prevent the SAA from retaking the militant-held areas in southern Syria. Israel has provided direct supplies to militant groups and has repeatedly bombed positions of the SAA during its clashes with militants. Now, all these efforts may turn to dust.

In southern Damascus, the SAA and its allies have reached the Palestine roundabout between the district of Tadamon and the Yarmouk refugee camp as well as has captured a number of buildings in the northwestern part of the district of al-Hajar al-Aswad.

Summing up the recent developments it becomes clear that ISIS faces its last weeks in southern Damascus as the terrorist group does not have enough resources to oppose the ongoing advance by government forces.

On May 17, Syrian President Bashar al-Assad visited the Russian city of Sochi and held a meeting with his Russian counterpart Vladimir Putin. The presidents discussed the current situation in Syria, including the progress of the political process. The meeting took place after another round of the Astana talks on the Syrian conflict, which was held in the Kazakh capital on May 14 and May 15.

I’m sick to death of the bullies both the US and Israelis..Time is coming that both will see the bottom of the fiery pits of hell. What good is it for man to gain the whole world and lose his soul.God bless the Yemens, Syria, Palistine, and all others who suffer at the hands of Satan’s children.

That would be you and all of your ilk. Iranians-Turkey- Saudis-Talibans-Iraqis-Lybians-Boko Haram- Syrians-South Africa, on and on and on with their drivel nothing but Islamo Nazis.

I assume that you are A Zio Nazi then Neil, although the murderous actions of Israel today make the German WW2 Nazis look like social workers.

Commie, you shgould react to his words and not vomit here your bullshits.

Social workers….
never thought of that, but
perhaps in explains the :
transfer project/agreement (HAAVARA agreement)
Why some call Hitler the godfather of Israel,
Why Gertrude Stein promoted that the

Noble Prize for Peace be giving to Hitler,
Why so many NAZIs were full blooded jews
Why the NAZIs protected and arranged the
resettlement of Yosef Yitzchak Schneersohn,
who was the father-in-law of Menachem Mendel Schneerson,
the last rebbe of the Lubavitcher Hasidic dynasty.
The Chabad-Lubavitch movement, was
the most influential and prosperous (with the possible exception
of the Vatican-whose money is managed by a certain ethnic family)
religious organization of the Twentieth Century.
And, what if Space or inner Earth Aliens are running the show
and the Zios, too, are social workers.
This is high above my pay grade…
….Social Workers!

Child protective services…..
Does it make you wonder where all the young kids went?

Well, a lot of research and prayer need to be done…
What if……….I better not say….

The Nazis killed 6 million jews methodically. It was systematic genocide, your a shithead for even saying that.

Show me your evidence of the ‘6 million’.

Get a fucking history lesson you fucking Nazi shit for brains.

Get a fucking history lesson you fucking Nazi shit head!

I obviously have more knowledge than you then about the real facts.

The FACT that you are unwilling to show any scientific evidence of gassing the population of a very large city in a couple of years during the constraints of war , or even today for that matter , show the paucity of your argument that is in fact built on the ideology of any religious cult and the false gods that people such as you worship.

You’re an American aren’t you?

this is your story , and whole world know this now , wait we coming to you shit man you and your zio’s . shame for humans like you

Yet among that “Satan’s children”…There are plenty of Muslims …Well almost all are Muslims except for Israel….other non Muslim participate in very small numbers.
Plenty of Muslims fighting on side of Saudi Arabia as mercenaries and killing other Muslims…
In Syria Muslim Arabs killing Muslim Arabs and for MONEY again and they call that “Jihad”
And that “Jihad” is only “Jihad” for Jews ! And Jewish interests only !

Let me tell you something. Wahabis aren’t muslims.

Just so you understand because i can see you are very uneducated in your third world wherever your from; sand nigger is a derogatory term for a worthless middle eastern muslim butt fucker. You called me a sand nigger in error, i cant be one because im not from the middle east. Nor am i a worthless muslim butt fucker like your father that fucked whatever dog that shit you out. But because i understand there is probably a language barrier here and that your lack of education wont help you in such a situation i will forgive you. I wont forgive your dog mother though, and what your dad did is just wrong on many levels.

Calm down, have my happy hour and smile.

Even if it is truth (and I think it isn’t Wahabis are spreading among the Muslims) many mercenaries in Yemen, Iraq and Syria are just ordinary Sunni Muslims.
You people are having serious problem. Your worst enemy has divided you and before you stop fighting each other you will not be able to do anything.
You can disqualify Wahabis also, but buy doing that you can’t disqualify the problem.

Go Go SAA,The whole sane world is behind you and your brave people and armed forces.Drive the Zionist scumbags out of your country for good.

what is the difficulty there??the terrain?? in lahat region (if i am not mistaken) espesialy that narrow corridor (like a finger) seems easy to to be liberated.. i think that at this stage of the war the 4th with the tigers easily they can do it..

Israel behind all the terrorists in Syria

Israel behind all the terrorists in Syria 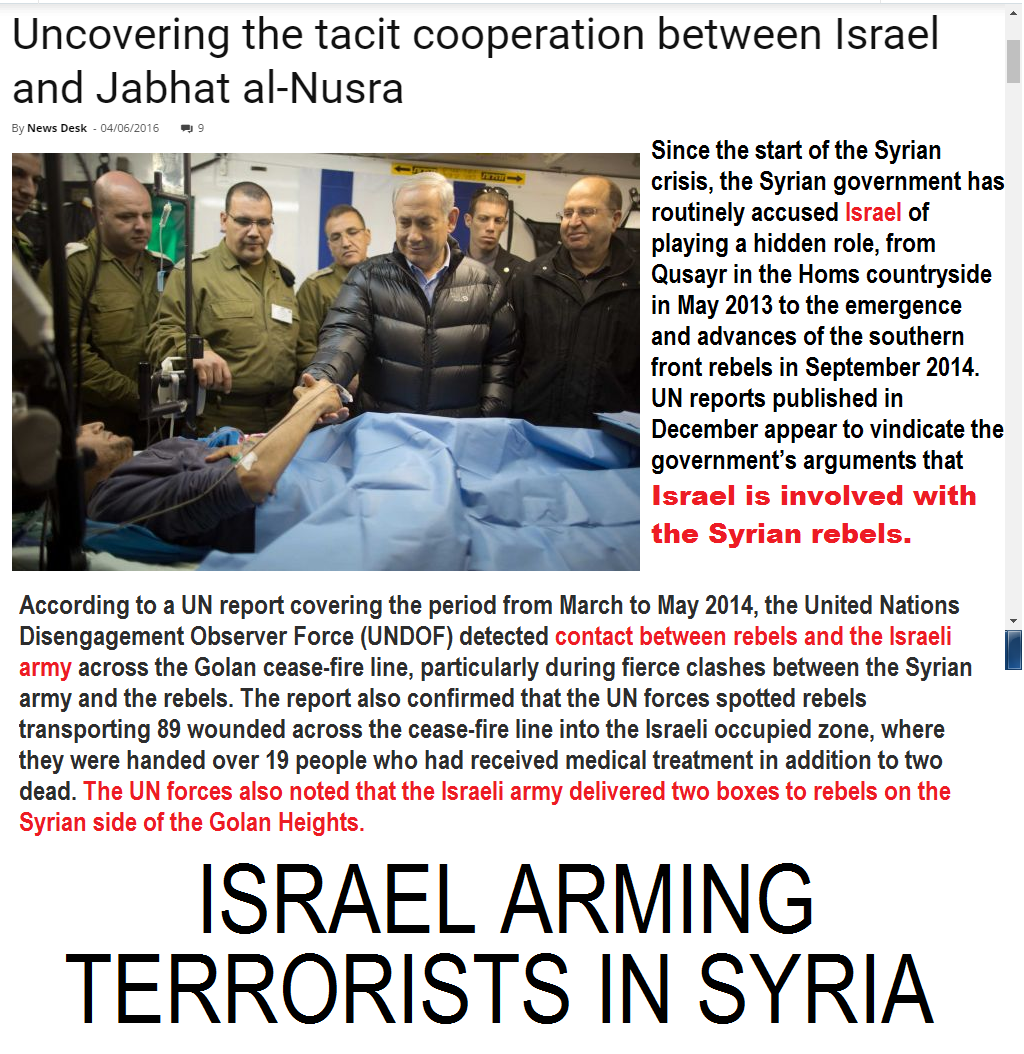 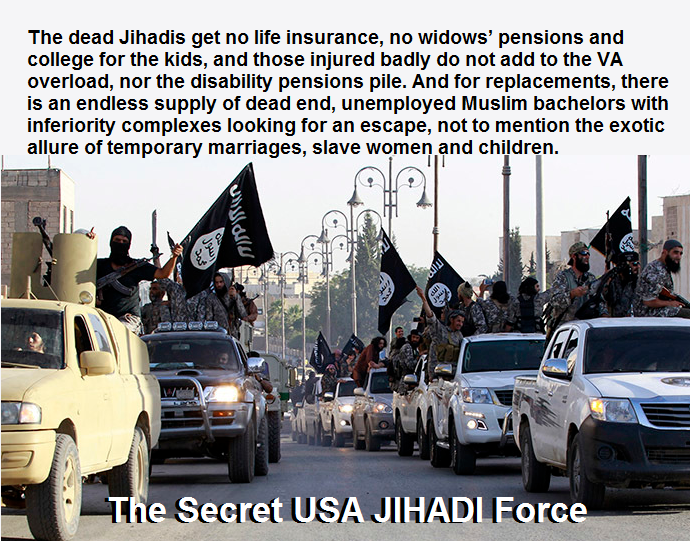 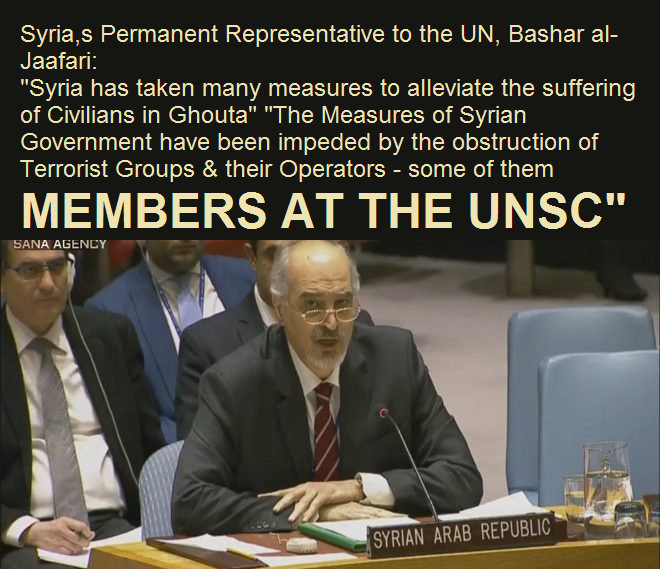 Ignore israeli threats, syria is already in ruins and israel has much more to lose in a direct conflict.

Israhell can bomb and complain all it wants, nothing can stop the fact that their little plan is stopped butt cold :))