On Monday, government forces started clearing the ISIS pocket in the Sabkah area. The crossroad town of Madaan located in about 67 km from the city of Deir Ezzor besieged by ISIS will likely become the next target of the operation. The Bishri Triangle is another high priority target for the advancing government forces. Capturing these sites, the SAA will establish control over the two key road heading to Deir Ezzor from the northwestern direction.
In Deir Ezzor city, the Republican Guard repelled an ISIS attack in the Al-Makbarah area and separately cut off the ISIS supply line to the cemetery area with a 280 meters long trench trapping the terrorists between the airbase and the government-held part of the city. An intense fighting is ongoing.

A new group of tribal fighters called the Euphrates Hawks joint the government advance on Sukhna signaling that more and more members of the Syrian tribes join the ranks of the Syrian government forces. Currently government forces are clashing with ISIS terrorists southwest of the town. The SAA controls a number of important high points, including Rajm Sabboun, Mount Qulaylat, Um Khasm hills and a part of Jabal Tuntur, that allows to predict that they will be able to develop advance further in coming days.

At least 18 ISIS members, two vehicles and a fuel tanker as well as a large fuel tanks convoy were destroyed by Syrian and Russia airstrikes in the eastern Hama countryside. The Russian and Syrian air forces had intensified airstrikes in the area ahead of another upcoming attempt to reach the key ISIS defense point of Uqayribat.

According to pro-Kurdish sources, last weekend, Turkish soldiers entered the villages of Siftik Wastani, Siftik Fawqani and Bubana in northern Aleppo but were pushed to retreat after a short confrontation with the so-called Syrian Democratic Forces (SDF) dominated by Kurdish militias. If true, Ankara has just been testing the US reaction to possible limited military operations against Kurdish militias in northern Syria.

Our heart is with Syria-Russia-Hezbolah-Iran forces, we hope you continue up to the end (to eliminate all hard-moderated terrorist groups). Later, it will come other difficult part, kurdis (USA) and Turkey. The Goland Highs can be left to the end (once the Syria military be well organized and strong with sophisticate weapons).

I wish them well on their Euphrates drive, could be a hard fight.

Steady progress to Deir Ez Zor city is needed without any US led “Terror Axis” interference.

Very good advance, but I highly doubt Ma’adan will be a target. The most likely option is the Bishri Triangle or even a typical Tiger Forces unexpected surprise push to Taybah and Sukhnah while Daesh has all its units here, besieging the Uqayribat Salient and making it into a pocket while joining up with the main SAA force southeast of Sukhnah and opening a new, quicker, supply route. Ma’dan is one of Daesh’s last urban strongholds and is located in a pretty densely populated area, the Middle Euphrates River Valley, which has always been the Daesh heartland. Ma’adan will be a tough Tabqa or Sukhnah-esque battle and the SAA doesn’t have that many soldiers in the area. They could outflank Ma’adan, but there is no way Daesh will abandon it like they did Deir Hafer and Maskanah. The Daeshbags can only run so far until they have to put a stand somewhere and that stand is at Sukhnah, Ma’adan, Mayadain, al Bukamal and al Qaim.

Bypass Ma’adan and cut them off and push them against Eufrates and head southward to Deir Ezzor, tribal forces should cordon the town and attrite ISIS aided by air strikes; ISIS can jump in Eufrates and swim on its eastern shore.

Ma’adan is not a Desert… it is located on fertile Euphrates river valley soil and it is an urbanized area. Look at it from satellite view my friend. Ma’adan has many multiple story buildings and good cover for Daesh to be able to put a stand: it is almost as big as al Bab for example

Desert, fertile plains present the same common denominator of being flat terrain, ideal for armour and mechanized units.
Daesh in Ma’adan get cut off and remain an isolated pocked slowly attrited by helicopter gunships and tribal forces sieging the city.

Bishri triangle would be the objective there Ma’adan can be seiged securing the south and closing the cauldron would be Ideal , then the push from Salamiyah can begin as the SAA are in place for Al Sukhna and ready for assaults on various fronts.

Its not that much bigger than the chain of villages arounf Ghanim Ali but I agree, their Eastern most forces have almost cut off Maadan out in the desert already, minmal effort required to bypass and there is a large plateau just to the East of Maadan that would be ideal for fire support base to provide overwatch and fire control over the Maadan area whilst the rest of the force cuts the corner to the South and goes for Deir Ezzor which isnt far, with the Republican Guards freed up much could be done, if they can get over the river it might be better to go for the oil fields first before cleaning up Maadan and going south down the Euphrates.

Shows large plateau to the East 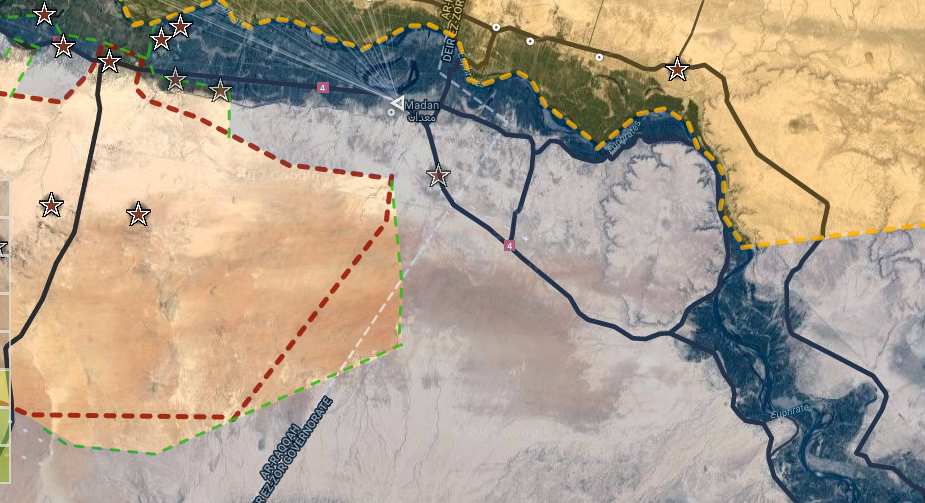 just stay as close to the euphrates as possible, remember keep your eye on the prize (DeZ)!!! retake as many towns as you can, but if you cant, just surround or bypass, and remember pincer :)))

“WASHINGTON POST BLAMES TRUMP ADMINISTRATION FOR EMPOWERING AL-QAEDA IN SYRIA”…HAHAHAHAHAHHAHAHHHAHHAH the CREATORS OF AL-QAEDA accusing others of their creation, a typical NAZY tactical move…Accuse those agains you of that which you are guilty.