On January 24, the Syrian military resumed its offensive against Hayat Tahrir al-Sham (formerly the Syrian branch of al-Qaeda) and its Turkish-backed allies.

Warplanes of the Syrian Air Force and the Russian Aerospace Forces carried out over 3 dozens of airstrikes on militants’ positions across Greater Idlib. Pro-government forces, led by the 25th Special Mission Forces Division (also known as the Tiger Forces) started a ground operation in southeastern Idlib. They liberated Deir Gharbi, Ma’ar Shimmareen, Abu Jurif, Kursiyan and a few other villages. According to reports, over 30 militants were killed or injured. Four vehicles belonging to Hayat Tahrir al-Sham were destroyed.

On January 25, government forces liberated Ma’ar Shamshah, Talmenes and deployed in the vicinity of Maarat al-Numan. The town, located on the M5 highway, is the key militant stronghold and the largest urban enter in Idlib province.

On the same day, army units, led by the 4th Armoured Division, attacked positions of militants near Aleppo city. They liberated the al-Sahafyeen residential complex and the Ghabat al-Assad hilltop, and destroyed a large weapon depot of Hayat Tahrir al-Sham. An OTR-21 Tochka tactical ballistic missile reportedly hit a militant HQ near Bawabiya. Nonetheless, government troops appeared to be unable to achieve more gains there.

On January 26, southeastern Idlib remained the main area of clashes, while the army offensive near Aleppo city fizzled. Syrian soldiers took control of Ghadqah, and repelled a counter-attack by Hayat Tahrir al-Sham southeast of Maarat al-Numan.

The Russian military deployed an advanced Tu-214R reconnaissance aircraft amid the Syrian Army advance on Maarat al-Numan. Pro-government sources speculate that this move is linked with the military escalation in Idlib.

US forces are working to limit the freedom of movement of the Russian Military Police in northeastern Syria. According to reports, US troops blocked at least three Russian patrols in the province of al-Hasakah. Local sources link the soft Russian reaction to these actions with the ongoing diplomatic effort of Moscow to normalize relations with Washington.

Late on January 25, a car bomb exploded in the Turkish-occupied city of Azaz in northern Aleppo. At least 8 civilians were killed and at least 20 others were injured in the attack. Turkish sources as always accused Kurdish rebels of the attack. However, no evidence was provided. During the last few months, a series of IED and car bomb attack hit villages and towns controlled by Turkish proxies. The main reason of the Turkish inability provide a popper security in these areas is that its proxy groups, with their criminal and radical behavior, are among the key sources of instability.

“‘led by the 25th Special Mission Forces Division (also known as the Tiger Forces)”
Those Syrian HEROES trained by the Russians!
Who else can do this but TIGERS?!!
NOBODY else but Tigers!!!
They deserve that each one of them has nuke missile as weapon!

I am sure that after the Soleimani murder, that the senior officers of the ‘Tigers’ are not ever in the same location or transport for more than a few minutes. Even a 100m distance would potentially save lives in the event of US attacks.

Fuck!
Tigers are the primary target for EVERYBODY !
Turks, US, IsrraHELL , NATO, everybody!
They should disperse them among other special forces units as commanding officers only so that they can inspire other brave SAA soldiers how to win !

Dont destort Syrian History Tiger forces as formidable force were already there before Russians came in.Train by Hisbollah and Al Quds of Iran years back.All Russian trained units cant beat your ISIS fathers.Out of shame Purin change Tiger special forces name and made it joint forces.Dont buy face fplease find out who’s your real father among all ISIS terrorists or else jump back were you have escaped from.Bloody two face agent just like KGB head Putin who cause collapse of Soviet Union with USA,ISRAEL,France,Brittain proposals.

Bloody double agend and European immigrant spy.Gone are days of buying face wrong is wrong and right is right and you rapefugee.

Turks should let saa tigers in.. no more time wasting.. assad bring the chemical in. at once will you………

Simple and clear USA France,Britain and Turkey must withdraw then terrorists will flee and war stop completely.

Nice to see them across the M5.

found this site today, hope SF team find it useful if they havent seen it before

and all other loyal SF viewers of course

It may take years for the truth to filter out when it will matter little one way or the other. The US govt have had years of experince at this sort of stuff .

A “Terrorist Gangster Bigot” on SouthFront, who doesn’t like “Freedom” or “Freedom of Speech” deleted my post. So I am posting it again 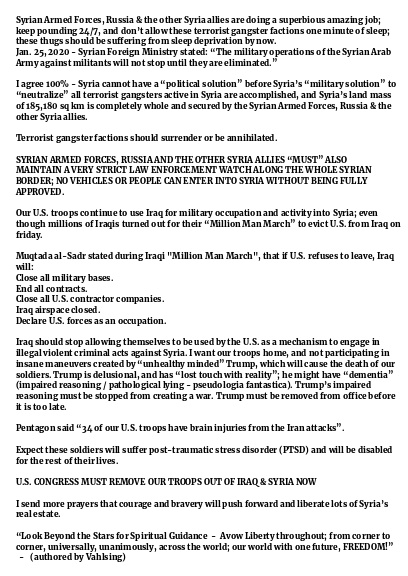 Not necessarily SouthFront, “Admin” rights belong to DISQUS as well.

I find that very strange that someone may have deleted that post. There are several groups on here that post some pretty obnoxious posts for and against each other and they don’t get deleted. Your post is pretty placid by comparrison so to be deleted for whatever reason is “strange”. I would think some other reason is the cause. People can block your posts but all that does is that “THEY” don’t see them but everyone else can. I doubt very much SF deleted it .