On January 20, the Turkish Armed Forces (TAF) officially launched a military operation in the area of Afrin and started conducting massive artillery and airstrikes on positions of Kurdish militias there.

“‘Operation Olive Branch’ has been started on Jan. 20, 2018 at 5 p.m., in Syria’s northwestern Afrin region to establish security and stability on our borders and region, to eliminate terrorists of PKK/KCK/PYD-YPG and Daesh [ISIS], and to save our friends and brothers… from their oppression and cruelty,” the general staff said in an official statement.

The Russian military relocated its forces deployed in Afrin “to ensure the security of Russian servicemen located in the district.” The country’s defense ministry added in an official statement that:

“Uncontrolled deliveries of modern weapons, including reportedly the deliveries of the man-portable air defense systems, by the Pentagon to the pro-US forces in northern Syria, have contributed to the rapid escalation of tensions in the region and resulted in the launch of a special operation by the Turkish troops.”

On January 21 at 11:05 a.m., units of the TAF and Turkish-backed groups of the Free Syrian Army (FSA) started a ground phase of the operation.

“The operation will have four stages, there will be a 30-kilometer buffer zone,” Prime Minister Binali Yıldırım said on the same day.

According to pro-Turkish sources, the TAF and the FSA captured the villages of Adah Manli, Balal Kuy and Kurin as well as captured four hills in the districts of Sheikh al-Hadid and Rajo. The advance is supported by warplanes, Bayraktar TB-2 unmanned combat aerial vehicles, T-122 Sakarya multiple launch rocket systems, various artillery pieces and armoured vehicles, including Leopard 2A4 battle tanks. About 200 positions of YPG/YPJ were destroyed by strikes, according to pro-Turkish sources.

In response, the YPG General Command said that no villages were captured by the TAF and all attacks were repelled. Pro-Kurdish sources also claimed that 15 members of pro-Turkish forces were killed and three TAF battle tanks were destroyed with anti-tank guided missiles (ATGM).

The YPG released a video of an ATGM strike at a Leopard 2A4 battle tank. However, the photo of the same tank later appeared online showing that it was only slightly damaged.

The YPG also accused Russia of allowing Turkey to attack Afrin and said that Moscow will be responsible for all civilian casualties there. It’s interesting to note that, according to reports, just before the start of the TAF operation, the YPG and its political branch PYD once again rejected a Russian-Syrian suggestion to allow the Damascus government administrative bodies to return back to Afrin.

Meanwhile, US Defense Secretary Jim Mattis said Turkey informed the US about the oepartion ahead of its start and added that Ankara has “has legitimate security concerns”.

The TAF operation in Afrin came amid a total collapse of Hayat Tahrir al-Sham’s defense in Idlib province.

On January 20, the Syrian Arab Army (SAA), the Tiger Forces and their allies liberated the Abu al-Duhur airbase and a large number of the nearby villages. In this way, the SAA fully encircled remaining forces of Hayat Tahrir al-Sham (HTS) and ISIS in eastern Idlib and northwestern Aleppo.

HTS launched a series of small-scale counter-attacks and targeted an SAA position in Suruj with a car bomb but was not able to stop the government advance. On January 21, government forces advanced north of the airbase and entered the town of Abu al-Duhur. On January 22, the SAA liberate this key town and continued operation to consolidate its recent gains.

Meanwhile, fierce fighting continued in Afrin. Kurdish forces in area faced the same problem from which their Peshmerga counterparts suffered in Kirkuk. They de-facto rejected close cooperation with all players except of the US, but Washington is not rushing to help.

SAA will eat all of them for breakfast 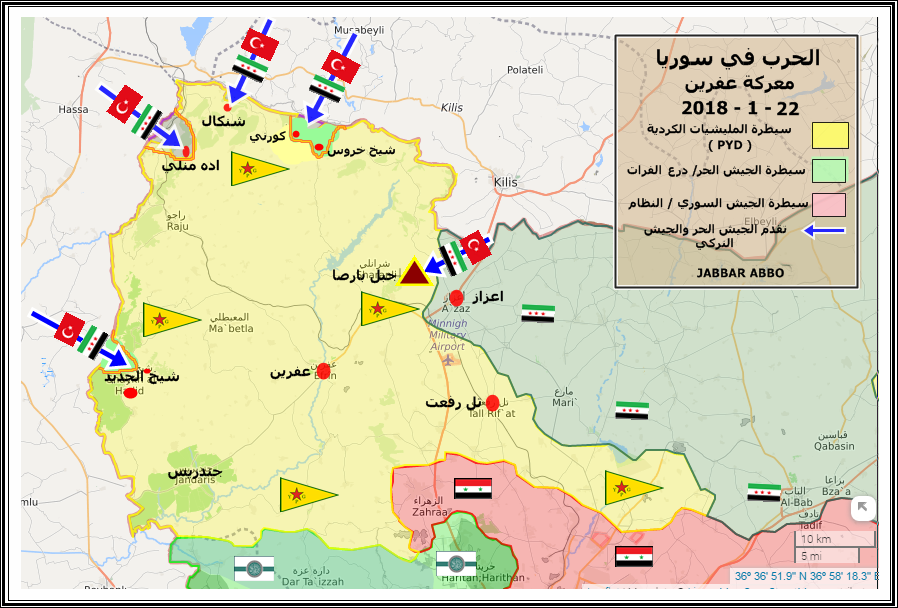 This is not a military opperation, this is an military agression against the Syrian Arab Republic and his legitimate governmet. I hope that the SAA capture Idlib as son as posible, be a peace with kurds (let his army and recognie the govern of Al-Assad, and créate her autonomous political sistem in Rojava) and finally, destroy the turkish ilegal forces and recapture the Golans

Be at peace with the Kurds? Have you paid attention at all? the Kurds were offered to hand over Afrin to the Syrian government but they couldn’t care less. They have been like leeches taking advantage of Syria’s struggle with foreign mercenaries in order to claim their own slice. You can’t blame the Syrian government for sitting back and letting things take their course…

It would be good, but firstly Kurds must understand who is who.

F the Kurds. They have had MANY chances to do the right thing, but chose to spit on the Syrians. They are no more reliable than Erdo and deserve everything they get. Not to mention their intelligence level must be that of a complete moron to have any faith that the US would stand with them. Here’s hoping that the Kurds and Turks fight to the death.

where are the proofs?

the islam fundamentalism was created and spreded by ayatollahs. the irgc was the first organization where the jihadists made suicidal attacks. they taouht in afghanistan the sunnis to these manners. there are the roots. you are too young, you know nothing.

Solomon,
You are nothing but a liar and you will remain a liar. Sometimes the other guy who uses your account says some interesting and funny things, but you, apparently lying is in your nature and you just can’t help it.

I dare you to give the proof of what you say, exactly in the manner of which you are asking.

Solomon, you said it yourself. You are the last Jihadi. No wonder you completely ignore Wahhabis and the terror they created with the help of the US but are quick to accuse Shi’as which never did a suicide attack.

Shame on you. You pathetic creature.

gargantua, i write the truth. zou are irgc fanatic. i understand your scream, but i will never agree with it.

This time I’m not my usual polite self, because a liar does not deserve respect or politeness.
You’re a liar, plain and simple. I know it, you know it, everybody here knows it.

Show the proof or shut your mouth.

iran is dirty islam state. does not deserve the existence. nuke all islam country! isolate all moslems from the rest of the world. islam ( moslems) is(are) anemy of the menkind.

No wonder you try to dodge giving proof and instead resort to this pathetic badmouthing against a religion and wow, more lies.

Strangely enough, I pity you.

i hate islam for decades. islam is much more then religion. islam is law system, islam is ideology. islam enslaves children and women, islam want to destroy human freedom. islam must be destroyed. or at least hermetically isolated. triple iron courtain around moslem countries. no business with them. no contacts. until they will not reform themselves.

of course, you can contradict what i wrote aboit irgc. but the fact is, your county, your ayatollahs sent 15-46 years old children against good weaponed iraqi soldiers. therefor had irgc several times higher losses than the regular iranian army.

YOU WRE THE CREATER of this suicidal tactics.

Many more articles on WikiLeaks regarding CIA creation of Al Qaeda. How about the cables released on Saudi Arabia.

Wahabism from Saudi Arabia es source of all ” islamic terrorism”. Al this terrorism is functional and work for G. Britain USA and Israel Zionism. The Saudi kings was created and sopported by G. Britain and later by USA. In the 80 they fight against russians in Afganistan. ISIS was created by MOSSAD to destroy Syria. Israel goverment said “we preffer ISIS to Assad in Syria”

no. wahabbism only pay jihadists. they use them.

Israel USA use them.

I’m old enough to remember what Afghanistan was like when the Soviets were there. Free medical care for all the population, free education for boys and girls, equal rights for women, bucket loads of cash for infrastructure and no opium production. Osama Bin Laden and others were preaching their fundamentalist hearts out, but the bulk of the populace just ignored him and carried on with their normal lives.
Then the US came along and poured bucket loads of cash into the fundamentalists cause, along with weapons, training and intel. Russian soldiers started dying and eventually the Russians moved out and left poor old Afghanistan to their own destiny. Look at Afghanistan now, it’s not the result of religious fundamentalists, it’s US interests that changed that country for the worse.
The US has lowered the standard of living, quality of life and personal security in all these countries, Afghanistan, Iran, Iraq, Libya and Syria [as well as many other countries around the world], and now Islamic fundamentalists are offering to make things better and safer for them. Unlike you, I don’t blame the fundamentalists, I blame the people responsible for causing the fundamentalists to become so appealing.

i am sure, that babrak karmals government (not soviets!!!!!) was benefivcial for afghani people. unfortunately, most of population did not want them. siviets wanted only expúansion. they shit on afghanistan.

the resistence against commies declared jihad. mujahedin is the real name for johadist. usa, iran,pakistan, gulf states only used the situation and armed jihadists. so, irgc anf russian excursion in afghanistan were the key point for creation of armed and fighting islam fundamentalism. the jinn is out of bottle…

People who was born blind can not see what there is in front of them.

The first compliment towards russia I hear from you.

oh no, i make compliments on russian address, if there is reason: bestest nuclear icebreakers (unfortunately nobody needs without russia and canada), space station technology, figure skating, …

Correction: Fruits of very clever and astute Russian strategy and diplomacy. They have massaged a key conflict of interest between the two main NATO allies and active co-conspirators against the Syrian state and leadership – Turkey and US – and ias part of process the Turks have redirected their FSA proxies away from fighting in southern Idlib against the SAA to fight and be degraded against the YPG in the Afrin confrontation. Genius.

As long as YPG would think that SAA/RuAF owe them something, they will be in trouble. One year ago SAA saved kurds in Manbidge, but later SDF payed off to them by capturing oil fields at the eastern bank of Euphrates…

…don’t forget Raqqah and the Kurds help in destroying the entire city…while giving IS a way out.

The Turkey attacked Afrin area because US delivered MANPADs to SDF.

The invading countries (USA-TURKEY) must leave Syria without any excuse. This other war was made by them to protect their terrorists from SAA fast advance.

YPG will be destroyed and brought to the negotiatng table after being seriously militarily degraded. They will then be far worse off than of they had actually negotiated at the outset.

Olive Branch is a good operational title, seems that Turkey have the confidence to throw off the shackles of US influence. CIA wanted erdogan dead in their attempted coup of turkey Erdogan is hardly going to let CIA controlled kurds to have arms that close to his country. Possibly it shows too, that US do not have the stomach for a fight, (as i predicted before, they just cannot afford it) US cant afford to replace their own stuff, which is why they have to sell them and get proxies to fight