On December 12, ISIS conducted a surprise attack on the Syrian Arab Army (SAA) on the western bank of the Euphrates in the province of Deir Ezzor. According to reports, members of ISIS entered the villages of al-Jalaa, Saiyal, Salihiyah, Mujawdah, Abbas and al-Harsa.

Clashes in the area continued on December 13. According to pro-government sources, ISIS was not able to develop the initial success and will be forced to withdraw from the area soon.

This was the second major ISIS attack on the SAA since the start of the week. On December 11, ISIS attacked SAA positions near al-Bukamal.

On December 12, the Kurdish-dominated Syrian Democratic Forces (SDF) advanced along the eastern bank of the Euphrates and captured Haraij and al-Bahran. Thus, the US-backed force used the ISIS attacks on the SAA to further their own progress.

The SAA and the National Defense Forces (NDF), led by the 4th Armoured Division, liberated the town of Zahraa and the nearby height from Hayat Tahrir al-Sham (formerly Jabhat al-Nusra, the Syrian branch of al-Qaeda) and deployed within a striking distance of the important village of Abu Dali.

Despite the recently declared partial withdrawal of Russian forces, pro-militant sources continue blaming Russian warplanes of airstrikes on its targets.

On December 12, a White House National Security Council spokesperson said that the US administration thinks “the Russian declarations of ISIS’ defeat are premature”.

“We have repeatedly seen in recent history that a premature declaration of victory was followed by a failure to consolidate military gains, stabilize the situation, and create the conditions that prevent terrorists from reemerging,” Reuters quoted  the statement.

However, on the same day, US President Donald Trump said that the US has won against ISIS in Syria and Iraq.

“We’ve won in Syria, we’ve won in Iraq, but they spread to other areas and we’re getting them as fast as they spread,” Trump said Tuesday at the White House during a ceremony to sign defense policy legislation.

It would seem advisable for the US president to improve his coordination with his spokespersons regarding these statements.

“””On December 12, a White House National Security Council spokesperson said that the US administration thinks “the Russian declarations of ISIS’ defeat are premature”.

“We have repeatedly seen in recent history that a premature declaration of victory was followed by a failure to consolidate military gains, stabilize the situation, and create the conditions that prevent terrorists from reemerging,” Reuters quoted the statement.”””

Russian declaration of ISIS defeat is absolute, hence it implies that a US pro

The only thing that the U.S did is create, train, supply and pay terrorists (Mercenaries) to destroy Syria.

If you think that ISIS is over…humm, better to ask Israel-USA-NATO whether or not ISIS is over, why ?
because they were its creators and supporter, and still they are. They can make ISIS strong again any time they want. Of course, Russia will have to come again and destroy these terrorists, but trying not to bother Israel-USA-NATO.

Gustavo, I have to agree. What you describe is ‘Insurgency tactics 101;’ a traditional approach by anti-government forces. Unfortuantely, ‘ISIS 2.0’ will probably rear its filthy head and practice ‘hide & seek,’ ‘hit and run’ tactics for the foreseeabole future–or as long as western (primarily American) monies continue to bankroll such operations.

He has to declare “victory” in order to have an excuse to pull out of an illegal war and not have the syrian issue come up during the elections.
This is purely political.

Hide Behind
Reply to  MeMadMax

MeMadMax
Reply to  Hide Behind

No..Russia is not there illegally in Syria

Give it a rest, Hasbarat agent… Putin and the Russians were invited into Syria to fight the “terrorists”.. The US and your beloved Isra-hell were NEVER invited and they are there as part of the attempt to destroy that nation..

I am sick of the Israeli rats that continue to come in here and pollute this site and the comment section with their trash and lies… But we all see them now instantly!

Putin was invited. The russians and the chinese are the only ones there legally.

Also, he is leaving because he is haunted by the russian/afghan nightmare…

He is like Putin. I’m 100% with you on that. The only difference that maybe exists between you and me is in this: it is compliment to POTUS to say he is like Putin, and I’m uber-happy to see Trump performing and delivering like Putin does. There are so many parallels between them, e.g. Putin was “the greatest traitor Russia ever had” at beginning of his rule – it was common narative for both ultra-nationalists and ultra-communists in Russian political spectrum. He was the one that, for the first time in Russian history, allowed NATO base on Russian soil (are we forgetting the recent history?). In similar fashion, oligarchs in USA are shitting on POTUS and I pray to the Lord to help him manage them on the same way Putin managed the same-type of scumbags in Russia. What a wonderful world would be – to have USA clean of mafia oligarchs, to have the Republic back, to have power back into hands of the people. It is coming, we, the people, already won all around the Planet. The Empire is on the run, we are on the march.

You are foolish. Trump is in NO way performing and delivering like Putin does. Vlad, President Assad and myself, were able to accomplish our ends IN SPITE OF the U.S. Go home, America.

My bro, I have no further objections on your observations ;)

It’s PURELY a LIE and typical for Zionists

Too early to declare victory. Moreover unless there is reconstruction, those territories will simply become breeding grounds for more of the same.

We Americans won the battle against ISIS. We won again because America is a nation of winners.

I agree with Vitex. I think Jensen was being sarcastic.

I hope so, surely nobody could be that deluded?

Another deluded Hasbara/JIDF agent, or a complete moron here….

Must be a sarcastic bastard.

You are also a nation of self-deceivers. President Assad, Vlad Putin and Myself, were the victors. Trump thrives on taking credit he never earned. And now I hear he is begging Putin for help with North Korea. And when that is concluded, I’m sure he will be taking all the credit. 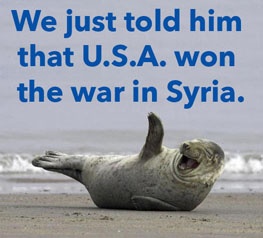 YOU gave me a great laugh with that one.Thanks

The BIGGER and GREATER the LIE , the greater chance that the PEOPLE( READ- Americans) will believe it, if promoted enough times

“On December 12, a White House National Security Council spokesperson said that the US administration thinks “the Russian declarations of ISIS’ defeat are premature”.”
1. The traitorous USA would not want the world to think IS is defeated; that would leave nothing for El Stupido (Trump) to do.
2. IS has not been defeated; it has only changed. To something better and more helpful to the world. El Stupido is having trouble dealing with that.
3. Be careful what you believe, folks.

We did it in spite of Trump—or El Stupido as I call him.

USA and Nato are hateful at Middle East and Russian Federation is welcome..juesej are liers.Who is winner?