1,411 residential areas have been liberated from ISIS terrorists since the start of the Russian military operation in Syria, Head of the Russian National Defense Management Center Colonel General Mikhail Mizintsev said on December 11, during a joint meeting of the interdepartmental coordination of the Russian and Syrian headquarters for the return of refugees.

He noted that the Russian Armed Forces successfully completed their operation of mopping up terror groups in Syria, including thousands of ISIS fighters. According to Mizintsev, only a few ragtag US-backed groups survived in the Trans-Euphrates region and near Al-Tanf. The remaining members of Hayat Tahrir al-Sham (Jabhat al-Nusra) were blocked in the Idlib de-escalation zone.

The colonel general also commented on the situation in the US-occupied area of at-Tanf where, he said, 6,000 militants are staying and the US-led coalition is preventing delivery of humanitarian aid to refugees in the Rukban camp.

During the same meeting, Russian Foreign Ministry spokesman Igor Tsarikov said that the US-held area is a source of destabilization in this part of the country.

Besides this, Clolonel General Mizintsev revealed that refugees reception centers had been set up in 412 localities and conditions have been created to receive 1,497,650 people. 10 ports of entry are now active on the Syrian-Lebanese border, Syrian-Jordanian border, in the Damascus International Airport, and in the port of Banias. Over 290,278 Syrians have returned from foreign states to their homeland since the start of the year.

Active efforts are being made to restore the destroyed infrastructure of the country. Since the start of 2018, 4,690 residential buildings, 266 medical facilities, 1,464 educational institutions, 1,022 electrical substations, 14,239 industrial facilities, 284 water stations, 206 schools and multiple other facilities have been restored.

It is also interesting to note that according to Clolonel General Mizintsev, over 96.5% of the country has been retaken by pro-government forces and militia. However, taking into account that a large part of northwestern Syria is controlled by the Turkish Armed Forces and various militant groups, including Hayat Tahrir al-Sham, that the northeastern part of Syria is controlled by the US-led coalition and its proxies, that the US controls the area of al-Tanf and that ISIS cells are operating in the Homs-Deir Ezzor desert as well as in the Euphrates Valley, it does not feel like pro-government forces are in control of 96.5% of Syria.

96.5% of 66% of the country? The SAA/Hezbollah/Russians/IRCG have fought gallantly so far but they’re still quite a long while away from liberating every square inch of Sovereign Syrian Territory; [Idlib/Afrin/East Euphrates/Al Tanf and never forgetting, Al Jawlān aka the Golan Heights too]

It must be the parts Russians will defend for Assads staying i power.

What’s it to you, Zombie?

” it does not seem like pro-government forces are in control of 96.5% of Syria.??? ” At least SF queried the impossible figure of 96.5%. Just what the US/YPG / SDF control must be close to a quarter at least .or are they suggesting the Kurds are pro government forces. I know they had a non aggression pact with each other as they swept Northern and Western Syria but ..

In the past I have the same reaction, but now reading the rest of Mizintsev declarations I think that what he wanted to say is this: irregular outlaw militias, without direct subordination to occupier foreign states (U.S. of A. and Turkey), and declaring that don’t want any kind of political settlement, only have the control of 3,5% of the Syrian territory.

Yes a bit hard to understand what he considers to be Syria and who controls what . Maybe even thinking only Iblid is not under control or even because most there signed agreements in other parts of the country not to fight anymore and were moved there they are under control .. Who knows .. but it doesn’t matter progress is being made and certainly in a lot better position than this time last year.

An interesting news, if confirmed: https://www.almasdarnews.com/article/russian-military-moved-s-300-system-near-us-forces-in-east-syria-report/

Not sure how Russia re-took 95% of Syria unless they have already kissed the Kurdistan and Turkey chunks of what was once Syria goodbye. Even if that is the case it is starting to look like ISIS now controls closer to 10% of what is left of Syria…. after Russia’s defeat in al Safa.

and i salute you for your righteous courageous battle,u have fought the good fight against a great evil and for that i salute u!! 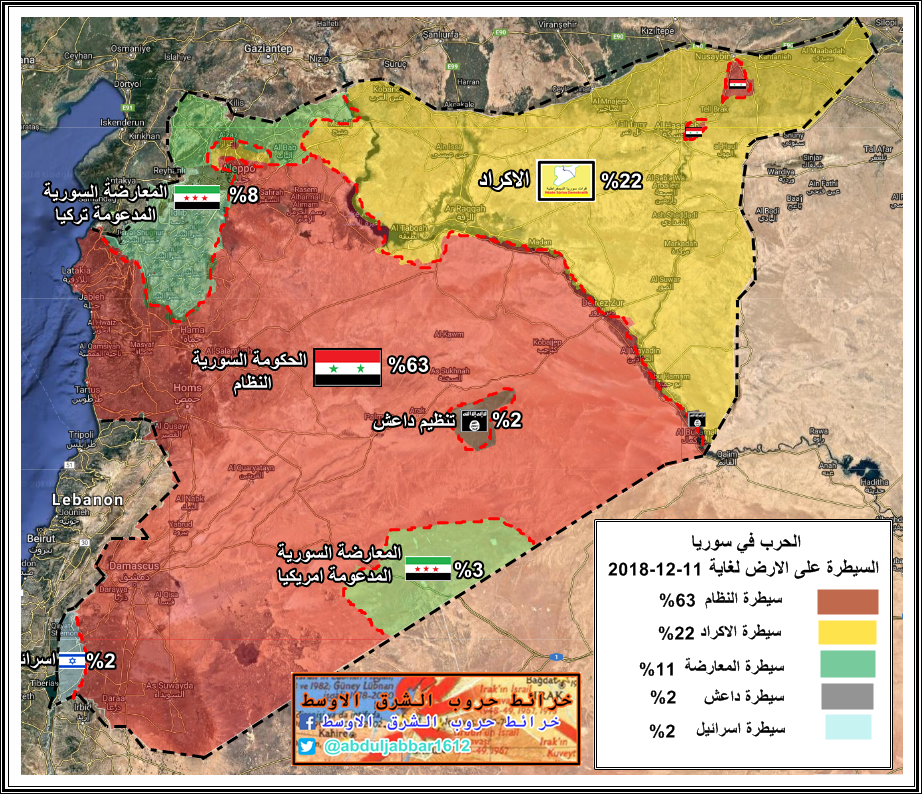 It is only 63% nave been retaken see the map

Thanks Abdul , that is easier t see so still can’t see where he got his 96% from ..but it does look like he has ceded control of the areas controlled by YPG / SDF