The area controlled by the Damascus government in Syria has grown by 250 percent over the past two months, Russian Minister of Defense Sergey Shoigu said on Sunday. Shoigu added that the liberation of the key town of Sukhna in the province of Homs opens an opportunity to lift the ISIS siege from the strategic city of Deir Ezzor. He added that Russia has “started persuading our American colleagues that terrorists should be separated from opposition to understand where to strike… Establishing the de-escalation zones today is exactly this separation.”
On Saturday, special operations units from the Syrian Arab Army (SAA) Tiger Forces carried out a successful air landing operation behind ISIS lines at the administrative border between Homs and Raqqah provinces.

Government troops led by Tiger Forces Commander Suheil al-Hassan were transported by 4 Mi-35 attack helicopters to the eastern Raqqah countryside 21km behind the frontline and liberated Khirbet Makman village, Al-Qadir town and Bir Rahum. Government troops are now deployed in only about 40 km from the recently liberated town of Sukhna.

Special operations forces killed and injured large numbers of ISIS fighters, and destroyed 3 battle tanks, 17 armed vehicles, 7 VBIEDs, and captured two VBIEDs, two tanks and several ISIS artillery pieces during the operation, according to the Syrian Ministry of Defense.
This was the first ever air landing operation conducted by the SAA during the ongoing war. It showed the growing military capabilities of the SAA supported and trained by Russia and Iran.

Meanwhile, the SAA and tribal forces continued pressuring ISIS in the town of Maadan near the Euphrates River. The SAA has still not liberated the town because of constant flanking attacks by ISIS in the area. Last weekend, ISIS attacked the SAA near Ghanim Ali and al-Kadir killing 7 SAA troops and capturing a battle tank.

In the province of Homs, ISIS conducted raids near Sukhna, in the area of Humaimah and at the Shaer fields. According to Amaq, 32 SAA soldiers were killed and 3 battle tanks, a BMP, a bulldozer and 5 vehicles were destroyed in the clashes.

Despite counter-attacks, ISIS is in very complicated situation. As soon as the SAA fully secures the Sukhna area, government forces will be able to pay more attention to other frontlines in the Homs province and counter a threat posed by ISIS units there.

Two US soldiers died and five others suffered injures while they were conducting operations in northern Iraq, the US military said in a statement on Sunday. According to the released statement, “the incident was not due to enemy contact”.

The ISIS-linked news agency Amaq released a statement claiming the US military suffered casualties because of the group’s shelling near al-Bwair village east of Tal-Afar town. According to the statement, ISIS used Grad rockets, killed 4 US soldiers and injured 6 others. Amaq claimed that ISIS members were tracking US forces movement via a small drone.

Troops of the US-led coalition actively operate in Iraq and Syria. The US Special Operations Forces even spearhead offensives in the crucial directions like Mosul or Raqqah, according to local sources. However, the US military prefers avoid providing official confirmations of such facts.

YOU ARE FINISHED DAESH!!!! HOPEFULLY ONE DAY THE WORLD WILL NEVER KNOW U EXISTED!!

When and if the Takfiri thugs really start campaigns in Western Europe and the US the panic amongst the general populations would be one of total hysteria. VBIED’s and suicide bombers would doubtless be used against the plethora of soft targets in heavily built up areas and even isolated targets such as water, fuel and power facilities.

The West has seen nothing like this style of terror that the US /Israel have inflicted in the Middle East in recent years. 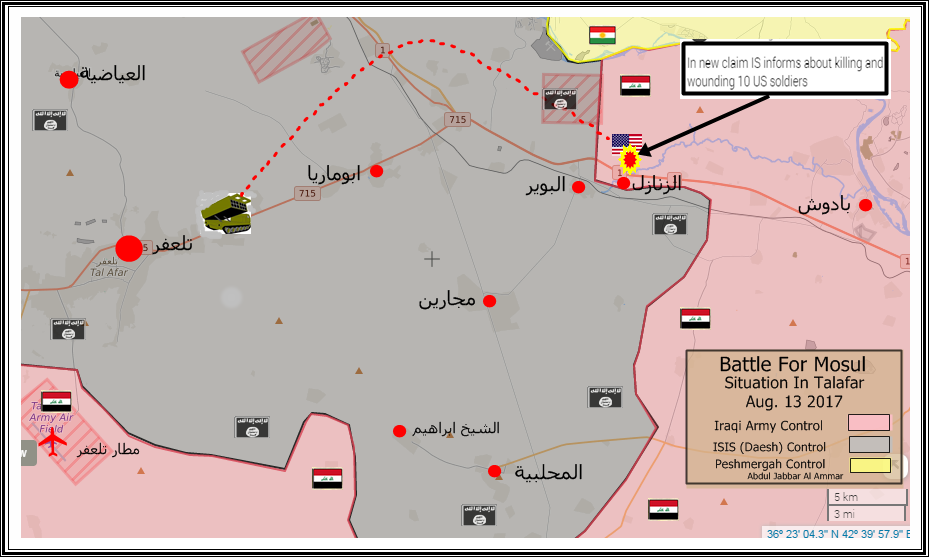 Daesh doesn’t have TOS-1, they have BM21

You simply do not know what Deash operates since there are no official reports.

I think this statement “This was the first ever air landing operation conducted by the SAA during the ongoing war” is not true, there was many air raid and support operation done before,(e.g. East Ghouta ,As-Safira) in 2012 , 2013, 2014

US should accept defeat and deal with growing problems at home. SAA has won.