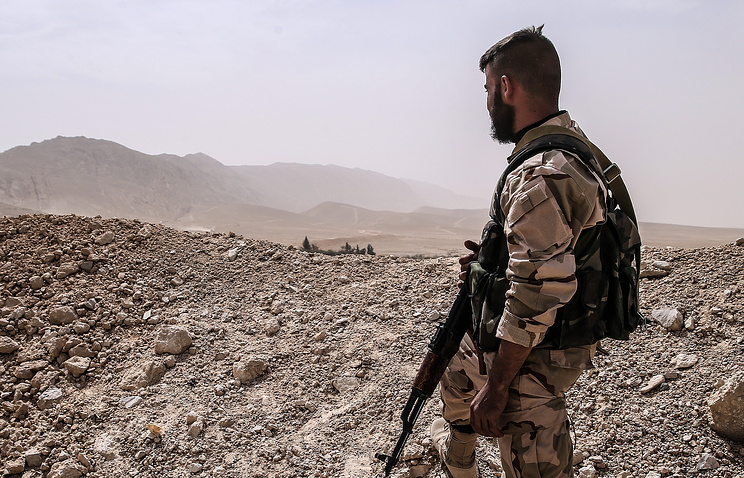 In 2018 Syrian troops eliminated 23,000 militants and liberated 387 settlements in Syria, Head of the Russian General Staff Valery Gerasimov said during a briefing for foreign military attaches on December 5.

Gerasimov recalled that Syrian government forces, who had gained considerable combat experience under the leadership of Russian military advisers, successfully carried out operations to take control of the Eastern Ghouta, Homs and southern de-escalation zones.

“The decisive role was played by the Russian Center for reconciliation of the warring parties. During operations, over 230,000 people were taken out of de-escalation zones through specially created humanitarian corridors,” the General Staff Head stressed.

Gerasimov also adressed the situation on the eastern bank of the Euphrates where the US is reportedly trying to create a Kurdish quasi-state formation.

“The situation on the eastern border of the Euphrates is deteriorating. The United States, falling back on Syrian Kurds, is trying to create a quasi-state formation independent from the central government there. They are already forming the government of the so-called Democratic Federation of Northern Syria. Americans support Kurds’ separatist aspirations by delivering weapons and military equipment to them, and they are thus allowing Arabic tribes’ oppression by Kurds”, he said.

The general went on saying that ISIS terrorists in Syria are mostly present east of the Euphrates, in US-controlled territory.

“In December last year, the active phase of the operation to eliminate gangs in Syria was completed. Today, Daesh [ISIS] militants are only east of the Euphrates, on the territory controlled by the United States”, Gerasimov said.

“The United States is always telling us about some fight against Daesh in the east of Syria. But we are seeing the opposite. ‘Sleeping’ terrorist cells have become active and as a result, Daesh has begun expanding its zone of influence in the east of the country.“

tontopollas
Reply to  You can call me Al

You can call me Al
Reply to  tontopollas

I would rate this 5 thousand out of 5 if I could.

Someone tried to tell me I was wrong when I stated in one of my recent SF posts that Assad had at least 15 to 20,000 ex FSA and anti Assad Arab militias here around Idlib ready to be sent in as cannon fodder in the very first waves of attack. He tried to tell me there were only 2 to 3,000 FSA that actually joined the SAA, well here it is in black and white, 40,000+ ex rebels joined the SAA, I hope you’re reading this article buddy. At least half that 40,000 would be here stationed around Idlib, all the ex FSA and a few other moderate Arab militias too, but all of the pro HTS Arab militias that were forced to join the SAA won’t be here at all, they’ll all be in the Deir ez Zor desert fighting Isis for the SAA, and nowhere near the action here. Assad only recently learnt that the hard way and he won’t do that again, making friends kill friends doesn’t always work [understandably], but he won’t be pitting friends against each other this time though, just the groups that aren’t getting along at all anymore, Like HTS and the FSA. If you all remember the FSA quickly turned on HTS and helped Assad beat them in Quneitra when they realised they’d lost the war to Assad, they switched sides in an instant. HTS will always remember that, there won’t be too many defections this time, they’ll be too scared to in case of HTS reprisals for what happened in Quneitra. I keep saying it, Assad is just so smart, he’s using the terrorists that are now fighting in his army to punish the other terrorists that won’t stop fighting, which means he gets to punish them both at the same time now, and even better, he wont be risking too many loyal SAA lives to do it either. My hero.

Not even one of the many terrorist groups is Shia.

It’s not Assad forcing the Sunnis to fight on his side to kill other Sunnis, they had free and fair elections [that Assad invited international inspectors to help coordinate and they wouldn’t] to decide what the Sunnis wanted. If you actually look at who got voted in, it was most representative of the Sunni population who make up most of Syria’s population, the only thing unusual to me about the election, was how many women got voted into power, not that the Shia population was overrepresented and seemingly had more power than they should have. “Will not see any Shia deaths in this war since they are already running things in Syria”. I don’t know if that’s entirely correct, I’d suspect some Hezbollah fighters have been killed on the ground by rebel forces already, they were fighting in Quneitra during the Daraa/Quneitra campaign which made the Israelis very unhappy, they would have had charmed lives if none of them were killed in the fighting there or anywhere else they have been. If not the Israelis bombed and killed not just Hezbollah fighters, but Iranian soldiers too on many occasions in Syria, so some Shia have been killed already. I can’t argue with the last one though, “Not even one of the many terrorist groups is Shia”, since hezbollah are nearly like heroes to me, I’d have to agree, but I’ll bet that Israel and the US don’t though. Cheers.

To elect a Totalitarian Dictator, Assad? The people need basic human rights more than a dictator. I see the battle over Syria as Turkey against Iran. Syria will never become part of the US or Russia. There is nothing in Syria that the Russian or US people need. Erdogan on the other hand intends to add all the Syrian land to Turkey. Iran wants to take Syrian land the same way they took Lebanon.

Everybody wants something, the trouble is Erdogan wants too much. Assad was elected in free and fair elections, he invited international inspectors to participate but they refused, you can’t call him a dictator if people actually vote for him, that’s a bit unfair. The war is over, it’s just the details that are being settled now, with a little bit of fighting in between to help things along.

Third time for this Russian Propaganda article. Russia lets al Safa ISIS go after having surrounded for almost a year. Even while they had al Safa ISIS surrounded they let them out to take hostages and to attack Assad’s opposition. 500,000 Syrians killed just to keep one dictator, Assad, in power.

Russia is so very proud of that accomplishment.