The Syrian Arab Army (SAA) and its allies, supported by the Russian Aerospace Forces, have reportedly captured  Siyasiyah Bridge from ISIS north of Deir Ezzor city.

Pro-government sources argued on Tuesday that the SAA got a full control over the site and started consolidating recent gains there. No notable ISIS counter-attacks were reported in the area. 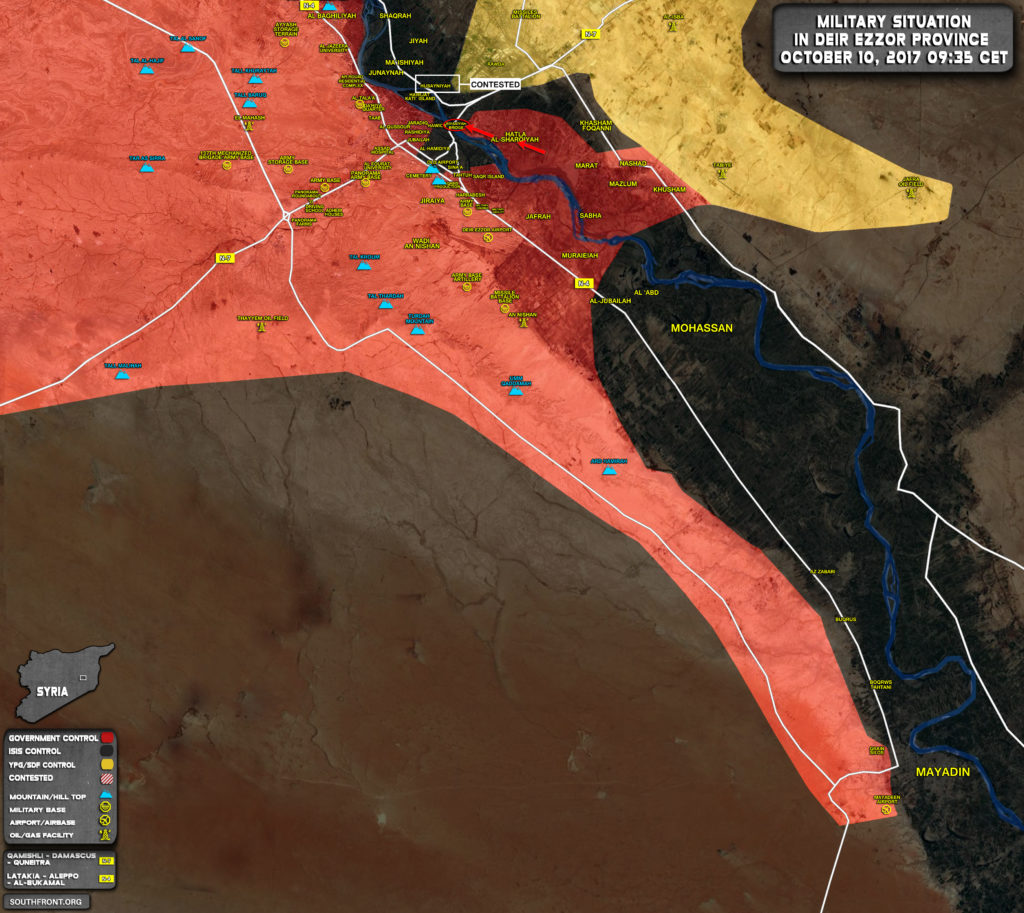 Fine. Now move on SAA and allies: Purge Saker Island and the remaining parts of DE City. Don’ t forget the oil fields in the south….

Omar oilfields are not in the south from DeZ. They are to the east, though there might be some small field to the south too.

Omar fields are in fact to the south-east of the city.

But East of the Euphrates, which is what he may have meant.

Omar/Saban is north of Diban city, is tempting the situation for launch airborne troops at safe distance.

Don’ t split hairs. The Omar fields are in the south-east of DE City.

The Mayadin bridge is much more important because it directly leads towards the Omar oil fields, which produce more than 50% of Syria’s total oil output. The bulk of the effort should be directed there not here. These are just peanuts, while the Omar oil fields are gold.

That bridge is destroyed too.

But I agree it seems like another tactical mistake. SDF on the map is more eastward than shown.

Rubbish, we all know ISIS occupies what SFD claims as advances. The only control of that area is US/Israel control of all proxies in area you describe. Forget the bridge is destroyed it is not the objective, the cauldron is. You either are unable to understand despite all information unfolding or your diatribe betrays you. Which is it?

Why the island on middle of river still not ocupied? They are very usefull, the use of an island for bridging and artillery of support

They have a tunnel system to the city and are getting reinforcements from those areas, the SAA has a control on the island but cutting them off is the main priority.

Well the Middle East doesn’t work like in colonial times anymore. At some stage the Kurds will need to give back most of the territory. It isn’t possible for the US to allow the Kurds to keep the territories without setting off total war and they are aware of that. Let the Kurds and their fanboys celebrate a bit but in the end they all know where this is going.

I do not believe that. USA kn ows that Russia-Syria will never attack USA troops and kurds troops, to avoid a possible WWIII. Therefore, USA-kurds could stay in that area as long as they wish, or makes it part of independent kurds territory. Russia -Syria haven ‘t been able to stop SDF advance since a month ago. They thought to much for crossing the river, and they crossed when they were blocked to go northeast and east to get oil fields in Omar. Do they still have a change to get oil fields in Omar ? I am really not sure, I am pessimist about this, but I hope they gave me a nice surprise since Russia-Syria-Hezbola-Iran have the capability to do it, but ¿ do they want to do it ?

Exactly, take the oil fields, cut ISIS off from supplies from Iraq and they will surrender anyway in Deir Ezzor sooner or later. If the kurds have the oil fields, they won’t give them back so easily. And Syria without the oil income can never pay for the rebuild.

Interesting report, if correct, given the source.

I can see the value of the position once reconstruction begins.

In the light of the present military situation, I do not see any value in a destroyed bridge. The only exception could be if SAA has no more spare pontoon elements and they need to take out the present pontoonbridge to rebuild it near Mayadin.

Temporary repairing the bridge, taking out the pontoonbridge and rebuild it, that could take several weeks. Do they have that “window” ?

Why don’t you go troll somewhere else kid. If you hate the SAA then just go to a Kurds only website.

First: they have enough pontoonbridges. Second: even a bridge is destroyed you can easily use the infrastructure on both sides of the river. Third: this point of the Euphrates cut off the supply line to the ISIS fanatics inside the remaining DE City. Fourth: An advance to Saker Island will be more comfortable now. Fifth: When DE city is fallen the total western bank in this sector is freed and secured. Sixth: At Mayadin are other units of the SAA and allies to do their job. This is called simultaneously acting. Seventh: Are no news on kurdish girlies sites?

The SAA has poontons buyed from Serbia, I believe.

If SAA dont want get surprize, should take the second parallel road and territory up to river. The wedge is very narrow.

Agree, and cut the road in the border of Mayadin give you access to one hilltop for dominate Al Qutur neighborhood (Where ISIS set trenches vissible in the common satelital maps, the defenses are from Al Hayal to the south, the SAA must learn to use the river, includes Tactical divers (the more feared weapon-soldiers for everybody)

The Syrians need to clear up the backyard before they challenge the Kurds.

I think you will find it’s coming, just not a priority at the moment.

Bravo SAA, I can see you are still doing the strategic actions; I pray you have more victories; You deserve to complete all your offensives eastwards. I hope Iraqi militias and pro Syrian forces in side Iraqi borders help push exterminate the rest of terrorists. We support you 100%; It has been a very long Proxy War against Syrians; And, you have been loyal all the way to your people and your POTSAR.