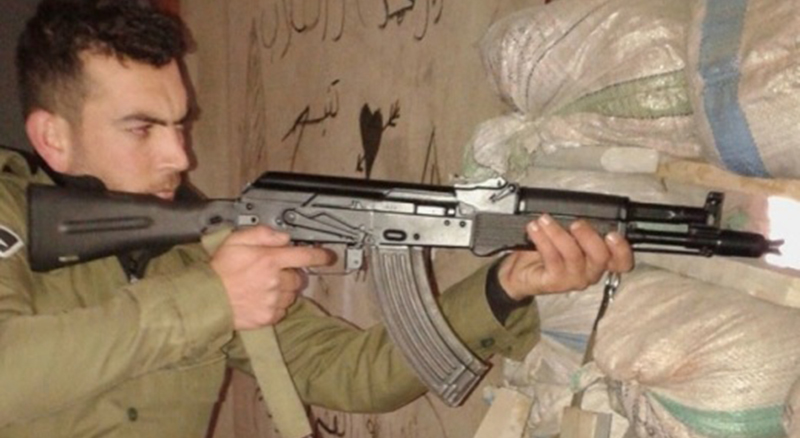 Original by Roman Katkov published by warfiles.ru; translation by J.Hawk

The main individual firearm in the Syrian Arab Army and other Syrian forces was the famous AK-47/AKM, made in USSR, China, Eastern Europe, including teh Hungarian and Yugoslav clones.

In the early ’90s, Syria acquired a small batch of AK-74M rifles. They were used by elite formations and did not trickle down to the army’s main forces. Therefore the Syrian forces had to cope with the international terrorists’ aggression using the decades-old AK-47, AKM, and Type 56.

Syria spent decades preparing for a confrontation with its main rival, Israel, therefore assembled considerable numbers of small arms, but the intensive fighting raised an urgent need for new weapons. Particularly since foreign sponsors were arming terrorists with modern rifles.

Therefore it’s unsurprising that military aid to Syrian forces included not only heavy weapon systems, but also rifles, machine-guns, latest-model sniper rifles. Media photographs coming from the war zone indicate that the AK-74M rifle can now be seen in the hands of Syrian troops with greater frequency. These weapons have earned high praise from troops who used them in bloody battles. Syrians are also of high opinion of another Kalashnikov weapon, the AK-104, which was supplied in smaller numbers and equips mainly special forces units.

The 104 can be visually identified by its shorter barrel with a flash suppressor, the black protective coating, and the shatter-proof plastic. It uses 7.62mm ammunition. It weighs 3.7kg loaded, it is 824mm long with stock unfolded, and has an effective range of 500m and a cyclical rate of fire of 600rpm. It uses the standard 30-round AK magazines.

This war is the first where the AK-104 has seen action but, like other Kalashnikov rifles, it too has demonstrated its phenomenal dependability and ease of use, which earned it the Syrian soldiers approval.

Doesn’t Moscow has tens of millions of AK-74’s that they will not ever use, even in case of WWIII?

If so, then a few hundred thousand as a present to the SAA for being a long and great customer should be more than in order.

sdss
Reply to  Any Mouse

ur comment is utterly useless and dumb.. they are already getting lots of presents and special weaponry which is not in the media ! let alone all the cruise missiles, satellite cameras , T90-A tanks and others..

Any Mouse
Reply to  sdss

Putin has clearly stated numerous times since September that Russia is there for the sake of Rodina’s interests; so to not let the Caliphate spread into Chechnya and CSTO.

Putin would not have waited 4,5 years if it was about righteousness and solidarity with humanity.

……and he would have stated so if otherwise.

Igor Dano
Reply to  Any Mouse

AK47is as good as AK74. I do not see any difference. Maybe more precise manufacturing, hence a nice finished surface. But the impact and precision at 250-350 meters is the same.

One shot at the time, yes, then the AK-47 most likely even has a greater impact.

But in the need to fire 2-3 savlo bursts, which is equally common, especially when fighting close range in urban areas, I would guess the AK-74 is better.

orgorg
Reply to  Any Mouse

I would prefer a shotgun.

are you fighting WWII?

Machine tolerance is the same on both calibers but also varies depending on manufacturers. Same rifle essentially just different caliber ammo which is what makes them have different attributes. Ak 74 ammo is lighter so you can carry more but doesn’t penetrate walls as well. Its easier to hold on target during burst firing compared to 47. Both are good hunting rifles be it two or four legged quarry.The new balanced action ak’s do even better at staying on target during high volume firing.

even with his regime on the line, Assad maintains an hierarchical distribution of weapons to his forces. for me, this conflict is more about stopping western regime change policies than it is about supporting Assad. he, his father, and their ilk, are idiots.

they are already getting lots of presents and special weaponry which is not in the media ! let alone all the cruise missiles, satellite cameras , T90-A tanks and others.. + they are investing heaps !

just so you know the U.S NAVY seals units have better weaponry than the U.S infantry … such a dumb comment of urs..

the rules state, explicitly, that you have to be over age 13 to comment.

……Assad. he, his father, and their ilk, are idiots. one has to wonder why any Syrian soldier ….. Your Excellency, do you know any better chief of state, than Assad? Maybe Barack Hussein Obama? Her Majesty Queen? Ex KGB asset B. Netaniahu? Maybe the head chopper in Saudi Arabia is your favorite one? Or traitors in EU, who intend to replace their native population by islamists?

“do you know any better chief of state, than Assad?”

wiser than both Assads and Putin, combined!

not to mention Xi Jinping!

I’d give you more uplifts if I could.

Regarding “Ex KGB asset B. Netanyahu”.

Your calling the tail the owner of a dog.

Syrians feel loyalty because all religious minorities in Syria lived respectfully in a secular state up until the West planned and executed a “revolution” and created both Takfiris and later ISIS for this very purpose; to create an Islamic state and such a threat to the Westerner that previously did not exist, and so to fulfill Revelation and its Koranic equivalent – a Western led Shaitanic holocaust of humanity.

All great reasons for loyalty to S]the Syrian Republic!!! I just don’t see Assad as the best embodiment thereof!

Let them have their own sovereignty, just like you want yours.

…as opposed to what we have today, for the Saudis, Ankara, West and all else including Russia is doing the opposite.

You shouldn’t! you are not a Syrian.

The rifle butt on these AKs is a little bit short.I always need an extension to shoot them.Otherwise they are great.