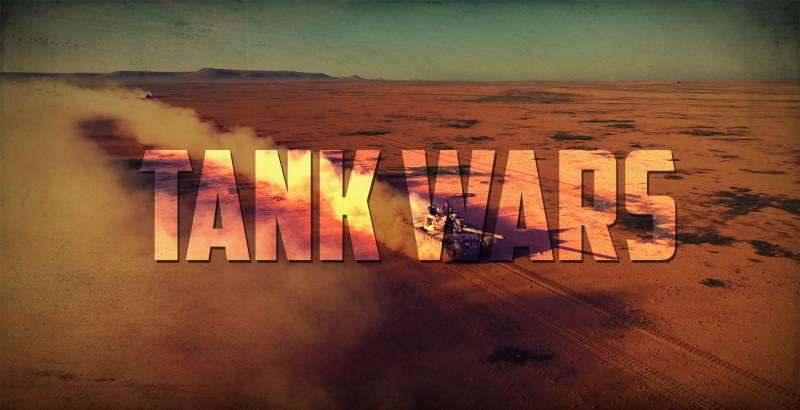 In the now-ubiquitous YouTube video, a man and his assistant scramble to jam a drab-looking canister into what looks like a giant camera array atop a tripod. After the tube is secured in place, the viewer’s perspective inevitably switches to a gun-camera-style shot. Amidst the background of frantic utterances and roiling heat waves, a click is heard, followed by a whoosh and then the orb of fire dances into frame, growing smaller while approaching its unfortunate target.

The extensive documentation of government vehicles being destroyed by BGM-71 “Tube-launched, Optically tracked, Wire-guided” (TOW) missiles in Syria after April, 2014 is no coincidence. One of the primary caveats given to the so-called ‘vetted’ rebel groups receiving anti-tank missiles is that they capture every ‘kill’ on camera. As a result, there is no shortage of evidence depicting the final moments of many Syrian Arab Army (SAA) main battle tanks (MBT).

As much as these grim reels betray the state of contemporary armored tactics being employed by the beleaguered SAA, they fail to capture the dynamic, often impromptu tactics devised in the early years of the conflict. Both SAA armored paradigms, in context with the T-72, will be examined in this article.

The bulk of the SAA’s Armored Divisions are filled out with the Russian T-72 MBT; specifically the T-72M and T-72M1. As such, the T-72 serves as the central character in a two act theater of war.
The T-72 is a grizzled veteran of over 25 conflicts and has served in the armies of 40 countries. Elite units in the SAA, such as the Republican Guard and 4th Armored Division, have T-72 upgraded with Elementy Dinamcheskoi Zashchity (EDZ) or “Dynamic Protection Elements.” This tiled armor presents a scaly visage and helps protect the crew from high explosive anti-tank (HEAT) rounds.

The 2011 Syrian Conflict is not the first implementation of Syrian T-72s on the battlefield. In the 1982 Lebanon War, Syrian T-72s engaged Israeli M-60 tanks, recording minimal losses from tank fire in exchange. As if to foreshadow the plight of SAA tankers in 2014-2016, an estimated 11-12 of the T-72 losses reported by the Syrian Army in 1982 were credited to Israeli TOW missile teams.

Prior to the widespread delivery of TOW systems through the Turkish border, criminal gangs in Syria that opposed the government were forced to combat SAA armor with pilfered Ruchnoy Protivotankovyy Granatomyot systems; the RPG-7 and RPG-29 being the primary examples.

SAA tactics between 2011 and 2014 included extensive employment of the column and staggered column. Both of these formations helped minimize losses from RPG by maximizing exposure of the 560mm and 490mm of frontal turret and hull armor, respectively. The staggered column usually featured a pair of tanks; one lead tank which was trailed by one or more tanks on overwatch with overlapping “fields of fire.” In some cases where infantry insertions were needed, BMP-2 AFVs would join the T-72-lead formation.

The benefit of a staggered column for T-72 crews in urban environments was a matter of capitalizing on risk. The lead tank took on the lion’s share of the risk while relying on those behind to provide close overwatch. In the example below, from the superb efforts of war correspondent Andrey Filatov, this tactic’s benefit can be seen to good effect from the perspective of a trailing T-72 driver.

The lead T-72 can be seen in the trailing driver’s periscope. Immediately above and to the right of the lead tank, a flash appears. An RPG narrowly misses the lead tank. Suddenly, the driver’s perspective swings to the left, towards the source of the missile. 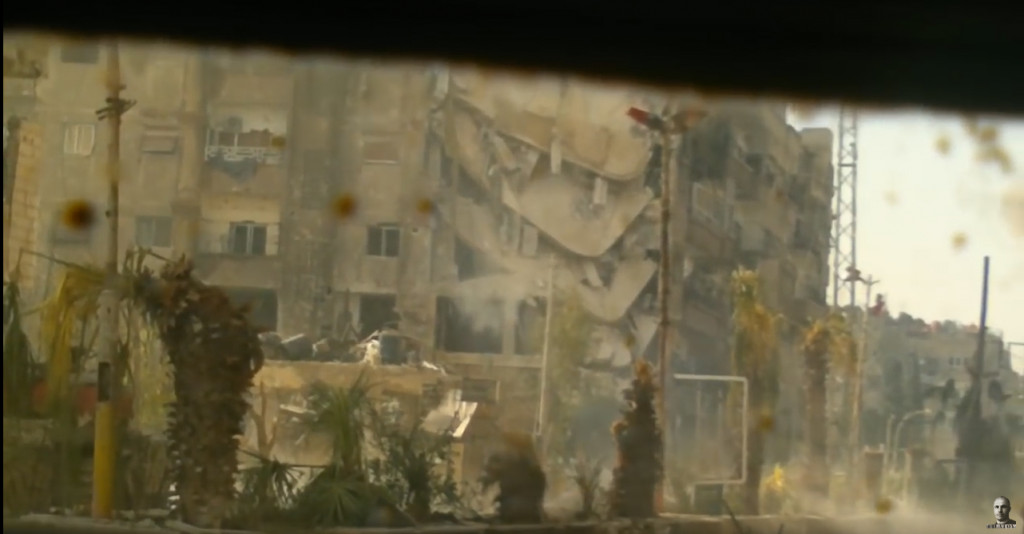 A small cloud of smoke and dust betrays the attackers in the center of the above image. The primary benefit of the column and staggered column is realized when trailing vehicles are able to identify points of contact from which their lead vehicle is being engaged.

Even as recent as 2016, after the introduction of the TOW, the SAA can still be seen performing a leap-frogging pattern of formation changes while assaulting an intersection in Damascus, Jobar District. The SAA have enjoyed some respite from US-provided advanced weaponry due to continual efforts to cut rebel supply lines leading to the capital city. The result is an unprecedented look at how the Syrian Armored elements execute a series of formation changes, reminiscent of pre-TOW days, from aerial drone videographers, russiaworks.ru: 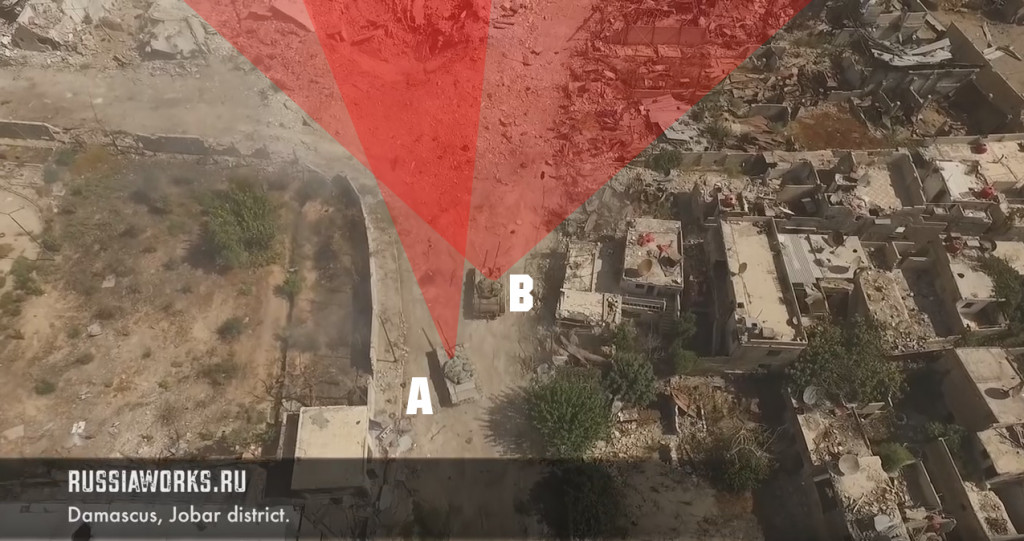 Step 1: Tank A provides overwatch for threats engaging Tank B. While Tank A’s field of fire is limited, the risk posed to the crew is also minimized due to buildings and walls flanking the vehicle. Meanwhile, Tank B is able to scan a wider range of territory, while offering only its frontal and angled side armor as a viable target. 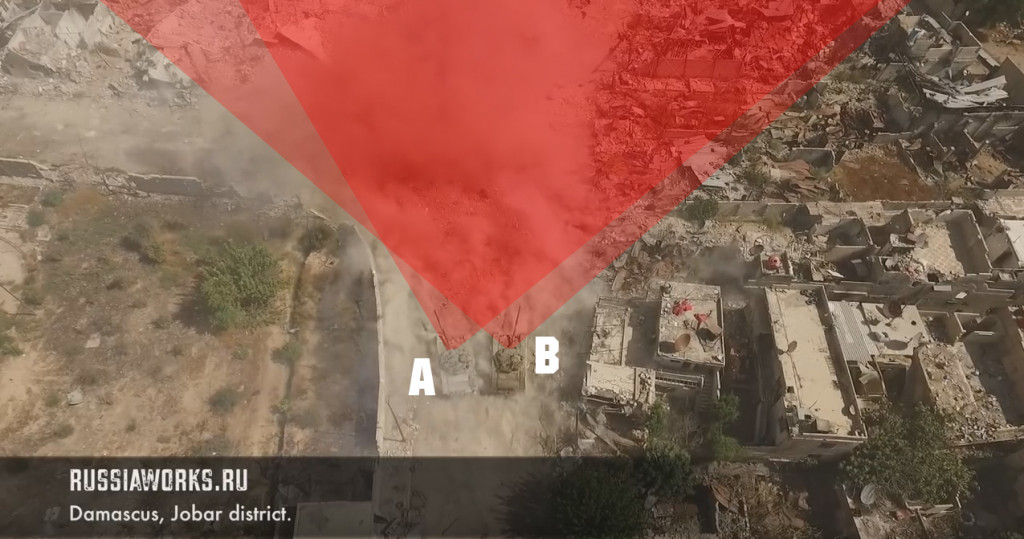 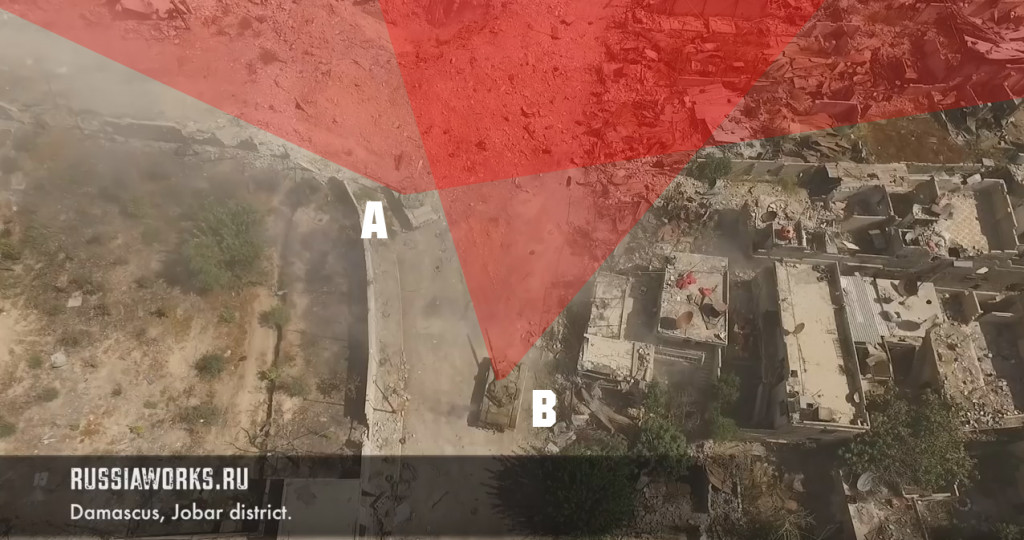 Step 3: Tank A takes point while Tank B provides overwatch, sweeping the threat area to its immediate front. In this manner, the tanks progress forward. 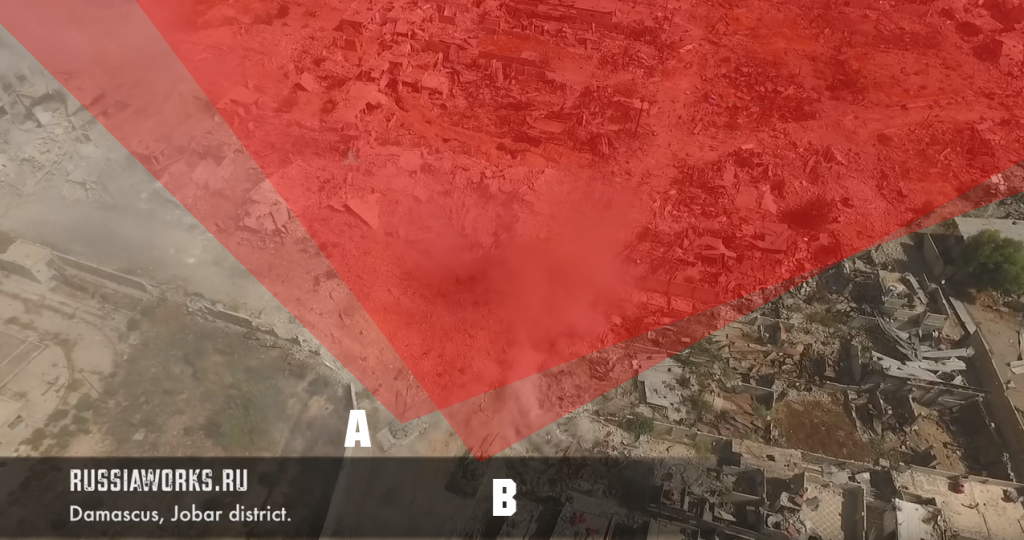 Step 4: Nearly out of view beneath the video overlay, Tank B joins Tank A in a line formation to guard a choke point running central to their field of fire.

In April of 2014, nine anti-government groups were equipped with BGM-71E missiles, capable of striking targets 3,750 meters away and defeating EDZ armor. Numerous gangs, including ISIS, obtained TOW launchers and ammunition through trade and conquest.  As a result, the Syrian tankers experienced a shocking period of losses during 2014-2015. The long range capability of TOWs combined with a dwindling number of operational T-72s may have led the SAA to adopt more conservative tactics. While understandable, these tactics during the Northwestern Syria Offensive (April–June 2015) did little to stem the losses from terrorist TOW missile teams. In the example below, anti-government forces open fire on defensively positioned T-72s from beyond the tank’s effective range: 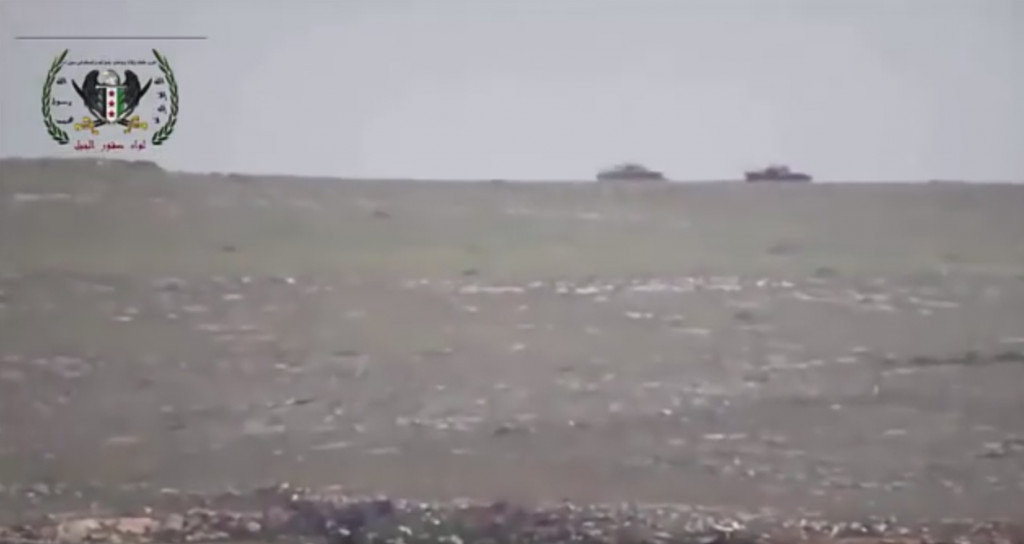 The tanks above are “sky-lining.” While the hill affords superior visibility, it also provides clarity for TOW gunners locating targets against the stark, desert sky. Seconds after this frame, the tank on the right erupts into flames from a TOW strike. 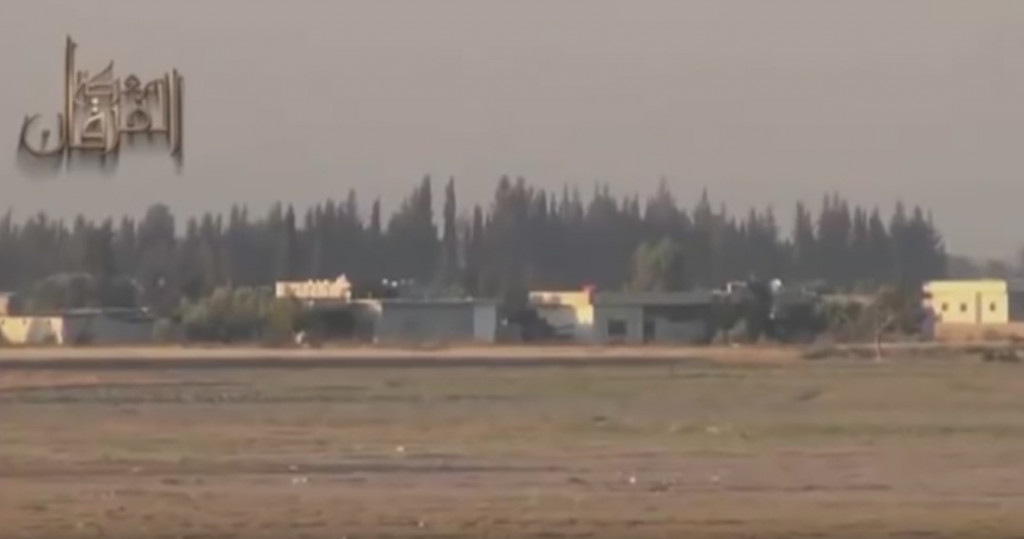 In the center of the picture, the dark silhouette of an SAA tank guarding a northern front is seconds away from disaster. Forced to take defensive positions, the SAA tankers could never guarantee their own safety from the threat of TOW missiles. In the open, advancing vehicles fared even worse. 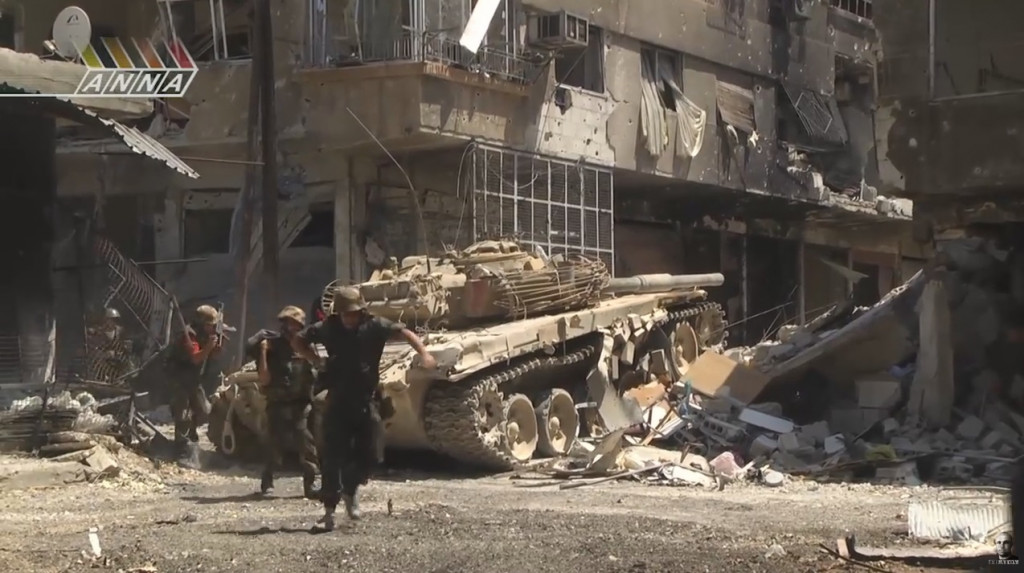 Another frame grabbed from the footage of Andrey Filatov. The T-72 is used by the SAA as a mobile barrier, bravely protecting the walking wounded as they evacuate in Al-Qaboun.

After the Syrian Army regained control of Khan Tuman, south of Aleppo, Iran reported T-90s in operation in the same area under Syrian control. While Russia would not initially confirm or deny the handoff of T-90 tanks to the SAA [SF editor: Indeed, Russia has confirmed fast the supplies of T-90s to Syria], the significance of their presence in Syria was demonstrated in yet another ‘kill cam’ TOW video. However, this time the tank would shrug the TOW off, with all three crew members eventually being reported as having survived. The thicker “slat armor” configuration for T-90 is credited with the save. 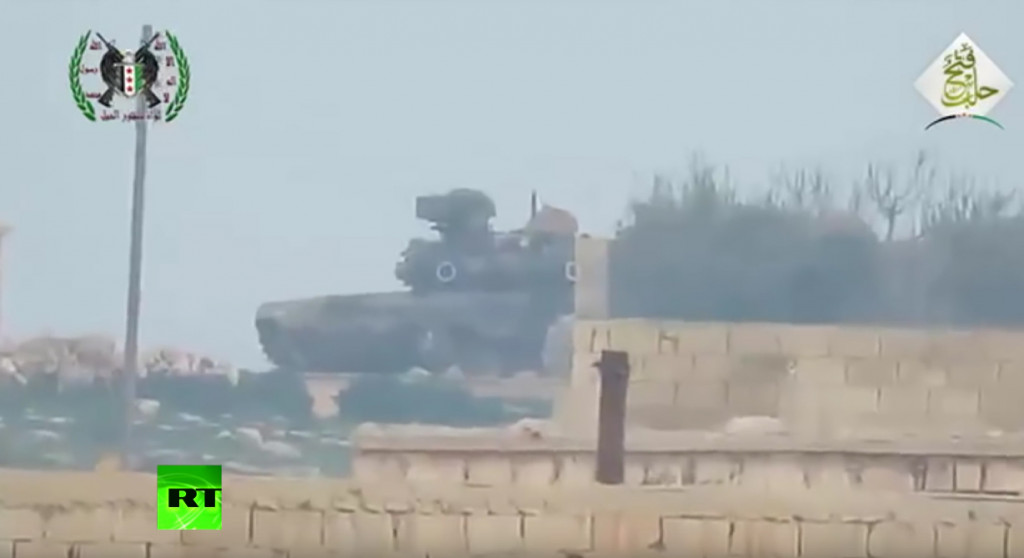 Since this video, rebel groups have begun offering rewards for destroyed T-90s, of which Russia has reportedly delivered a dozen to an “elite unit of the SAA. The T-90 is equipped with the Shtora “soft kill” countermeasure, which uses lasers to confuse Anti-Tank Guided Missiles (ATGM). In the video example cited above, the manufacturer claims the Shtora system was switched off.

The T-90’s fire control system allows for engaging targets at over 9,000 meters in range with fragmentation shells. With this reach, the T-90 turns the tables on the terrorist gangs, by targeting terrorist TOW missile teams from beyond their effective range.

Tanks are effective in large numbers deployed along with supporting forces (infantry and air) for rapid offensive maneuvers or counterattacks.

Syrian government deploys its tanks piecemeal using them as static artillery = failure. Eventually all the tanks are ‘used up’. The videos show Syrian armor being destroyed one by one.