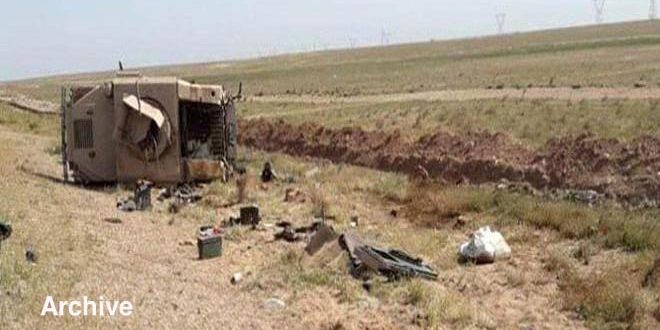 2 US soldiers have disappeared in the Syrian province of Deir Ezzor after the attack on their vehicle near the Omar oil fields, Syrian state-run media reported.

The sources indicated to SANA reporter that unknown assailants attacked the Hummer vehicle carrying US occupation troops while it was traveling from al-Omar field to al-Tank field where the vehicle was found completely destroyed and burned.

The two troops’ fate is still unknown, according to the sources.

Earlier this month, an officer in the US army and two members of the US-backed Syrian Democratic Forces (SDF) have been killed in an ambush carried out by unknown persons near the village of al-Wasi’a which is affiliated to Al-Sur Township in Deir Ezzor countryside,” the report by the SANA news agency says.

This is the third report of this kind within the last few weeks. Earlier, SANA and other Arab media claimed that several US troops were killed in attacks by unidentified gunment in the northeastern part of Syria and on the eastern bank of the Euphrates. All these reports remain unconfirmed by the Pentagon. It’s possible that these killed ‘US soldiers’ were just US-linked private military contractors. So, the Pentagon is not oblidged to report these casualties.

Hopefully the cunts are having a cavity search on their lardass.

Why the maericans are there is already well descriebed. No one should be a paid a million just because they are slow readers or worse.

Maybee a million should be used for education, oxygen and genetic modificastion.

What is genetic modificastion. is that castration with modifications , like removing the head as well or do they add enlarged tail pipes so everyone can hear you when you are coming.

For dollars looks like they were zato mercenaries. Mercenaries are far more easier for the zios to deploy then regular so called soldiers

Its so hard to get any reliable information for the area.

Square peg dont fit in the round hole you made, of well, try a hammer.

Jen’s is looking for a smaller square peg now,Mike. :)

You are assuming Jens has the ability to look. Judging by the waffle he spews I assume he is still locked in the baby chair waiting to be handed everything.

US has found another hole in Syria to sink in as if Iraq and Afghanistan were not enough.

Hey it’s worth it. The rednecks enjoy being stoned by angry locals. They enjoy fighting wars and occupying countries for israel.

Well they should not have been in syria, and when you join the military either as a regular soldier or “private contractor” who the hell knows what will happen to you nobody can predict it you might straight die or be captured and die or released or escape or survive who knows

Remember, these are US troops that would be alive today if Trump had removed US terrorists from Syria as promised.

Its the only language they understand.

It’s fake cries Col Miles Baggins lll , a distant relative of Bilbo Baggins the first. Well he would know what is fake seeing as he specialises in fakery.

According to Michel Chossudovsky, the highly respectable Jewish man and founder of GlobalResearch, the Zionist Vermin’s plan was to topple all Middle Eastern Governments and replace them with US Military presence.

The current situation in the Middle East is a perfect example and confirmation of this. “Greater Israel Project”. Dumbass Rednecks in foreign lands over 7,000km away from the USA who fight and die for God’s Chosen Goblins. Sad.

Unfortunately, the entire fact that WW2 occurred (if only had it not ever began), has led to this current situation we have today. Never ending war, blood shed, violence, tension and conflict ALL for the SAKE of a hardline nationalist Zionist movement and fake state created in Palestine by europeans who were ATHEIST and mostly not even religious.

And God forbid you dare question any of this publicly or anywhere, right away you have a massive NOSE in your face screeching “ANTISEMITIC!”

Shame it wasnt US troops

THE MORE US DIE OUTSIDE THE US, THE BETTER FOR THE WORLD.