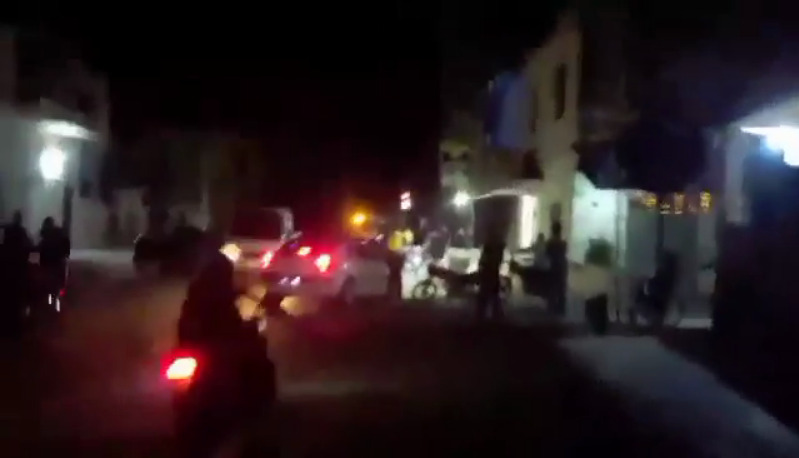 Screen grab from the protest video.

Late on May 27, Syrian security forces clashed with pro-opposition protesters in the southern city of Daraa, a former stronghold of the rebels.

Dozens of opposition supporters took to the streets in the southern part of Daraa, known as Daraa al-Balad, to protest against the presidential elections which saw President Bashar al-Assad wining with 95.1% of the votes.

The gathering was peaceful at the begining. However, the situation took a turn to the worse when the protesters marched towards the northern part of Daraa, known as Daraa al-Mahata. Key government buildings are located in this part of the city.

Syrian security forces fired in the air to break up the protestors, who numbered in the dozens per opposition sources. Four protesters were slightly injured.

Anti-government protests are held on a regular basis in Daraa al-Balad. This was, however, the first time since the 2018 reconciliation deal that the protesters clashed with security forces. In recent protests, most protesters were armed with assault rifles.

Despite a boycott by opposition supports, calls for a general strike and attacks on government forces, the presidential elections were held in many parts of Daraa.

The situation in Daraa is slowly spinning out of control. Soon, Damascus may find itself forced to take drastic measures, militarily or politically, in order to secure and stabilize the region.

Same old Muslim Brotherhood activists and militants – security services will have to round them up at some point to cut head off the MB snake.

Giving them amnesty in Daraa was a mistake, the entire region is still full of bandits, assassinations happen on regular basis and now ‘protestors’ with assault rifles.

Exactly right. No other nation would have done that to FSA/MB/HTS Salafi religious extremists, terrorists, mass murderers and traitors who commit treason, foreign espionage, war crimes and genocide against their government and people! They must be held accountable, jailed or executed for what they continue to do! Fuck the Zionist Muslim Brotherhood terrorists working for Mossad, CIA, MI5, NATO, etc.!

Muslim Brotherhood are treacherous minority Islamist faction – and they will join forces with ANY outside foreign sponsor to try and get their fundamentalist – and anti-secular – goals into power. Be it with intelligence services of USA or UAE. Both Egypt and Syria have been dealing with Muslim Brotherhood insurrections and armed violence for decades.

I’m glad to see that Damascus hasn’t made the same mistake twice. These anti Syrian demos need to heavily policed. With a 95% approval rate, the current gov’t can get jiggy with it should ‘protestors’ get upto their old tricks.

Shot them all . Those are only dirty beasts .Those have nothing human .

Seems at some point, the SAA will have to go in and clear out the terrorists.