On February 6 eve, warplanes of the Syrian Arab Air Force (SyAAF) and the Russian Aerospace Forces (VKS) carried out a series of airstrikes on Idlib’s city center.

According to opposition sources, the airstrikes targeted the district of Sheikh Thulth. Syrian and Russian warplanes also targeted several positions in the vicinity of the city, including the spinning and weaving plant.

The Syrian Arab Army (SAA) is now stationed only 9 km to the south of Idlib city. Earlier today, the army liberated the city of Saraqib, one of the biggest urban centers in the region.

Beside the recent wave of airstrikes, the SAA’s artillery has been pounding militants’ positions around Idlib city since the early morning.

The SAA will likely resume its advance in southern Idlib in the upcoming few hours. The town of Sarmin, which is the last position separating the army from Idlib city, could be the army’s next target.

Time to drop some on Erdogan himself

Where the hell is the Hellenic Air Force? You think they would be eager to bomb the Turks.
Instead, I read they’re sending a Patriot to Saudi Arabia to guard the oil wells. Greece is no more. How sad!

Imagine a joint Greek/Russian Air campaign in Idlib against Nusra/FSA/jihadis/turks. Unfortunately will never happen since greece is NATO and cuck for USA/Zionists, but just imagine for one second the amount of Turkish tears. it would be a turkish tear tsunami flood entire world

The Greek government, maybe. I knew too many Greeks to ever believe the Greek people would be cucked by anybody. They only barely tolerate their own useless EU puppet government now. Kind of like how a cat plays with a mouse before it eats it.

Besides, Greece still has three or four operating squadrons of F-4Es. Dear Greece: If you need any more Phantom pilots, I will pay for my own qual and fly one of them for you for free. in fact, I’ll actually pay you if I can bake some head-chopper contagion off the face of the earth with an F-4.
Phantom Foreign Legion… f’king Snackbar! 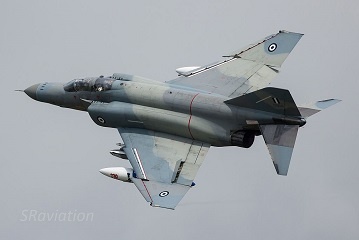 It’s a great reveal of Western Governmental and media lies about the joint Syrian-Russian air campaign in that a simple statistical analysis shows that there would not be enough combat capability and sortie rate for the two air forces to both engage the jihadi forces in a large scale bombardment powerful enough to clear the way for this terrific advance, and to also engage in the widespread bombing of civilian sites such as hospitals and basket factories. The accusations have led to an unprecedented Secretary General investigation, unprecedented in that there was no security council resolution that authorized it, just a NATO diplomatic request to the Secretary General, a former NATO senior leader. Riddle me this: How is Russia’s small air force expeditionary force inside Syria and an attrited Syrian Air Force using older planes for ground attack such as SU-22’s in small numbers, both engaging in effective combat bombing in Idlib, going back for safety maintenance and also diverting to targeting civilian sites? Somebody is lying and we all know who. The question is, is the Office of Secretary General also so corrupted, like WADA and the OPCW, that lies are truth and truth lies to himself and his office. Waiting in breathless anticipation for the report from his “investigation.”

all the jihadi fangirls and fanboy on twitter be like “OmG, iDliB is burning, SAVE ODLEB” XD