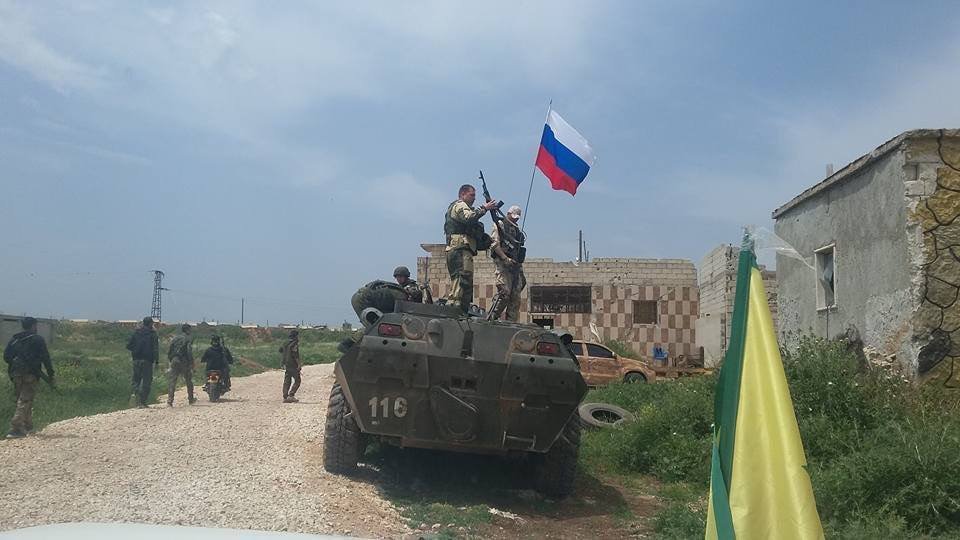 On December 25, Syrian Army soldiers, backed up by Russian servicemen, entered the village of Arima in the northern province of Aleppo. It’s is located west of the town of Manbij, which is under control of the US-backed Syrian Democratic Forces (SDF).

Local sources claim that this move is a first stage of broader agreement between the Damascus government, Russia and the Kurdish-dominated SDF, which could to be reached soon.

Since the US decision to withdraw its troops from Syria and the resumed Turkish threats to launch a new military operation against Kurdish armed groups in northern Syria, the SDF has been desperately seeking for a new protector from Ankara. The Damascus government and Russia are one of the options considered by the Kurdish leadership.

The Damascus government and Rusisa is the only option

The only option is to wipe out all terrorists and liberate every inch of Syria and then Golan Heights. BTW, it is Hezbollah flag that is flying near the BTR 80.

Kurds are scum and treacherous and need no protection.

Why must Kurds negotiate with Russia? Surely, Kurds should negotiate with and welcome the Syrian Army and Damascus as their Ally against the Turks and their private corps of head-choppers recruited from within the ranks of the Salafists in Syria’s Idlib? Why do Kurds seek outside help at all while some within ranks of SDF claim they are fighting to free Syria of ISIS at the same time as their political “leadership” appears to be saying they want to carve out a mini-State within NE Syria. I’m sure the majority within the ranks fighting on the ground would welcome SAA + Russia + Hezbollah + Iran to help them stamp out the remnants of the Saudi Salafist ISIS while at the same time guaranteeing the security and integrity of Syria’s Borders and ensuring Kurds that in the event of Turkish attack, all Kurds and all of their Arab & Christian neighbours remain safe from harm.

This is good, Russia, SAA and the Kurds working things out to solve the problems left behind by US.

‘The Damascus government and Rusisa are one of the *options* considered by the Kurdish leadership.’

It’s called herding, in my opinion.

The Kurd Leadership would really need to be doing more than “considering” the Syrian Army together with Russia AND Hezbollah AND Iran as Allies against the Turks. Are they all blind, deaf AND stupid?

Instead of concentrating on Israel attack Russia advise the Syrian forces to rush to Manbij for traitors rescue against Turkey.Led SDF and Turkey terrorists FSA disarm.That should be the negotiation point.Deploy either Syrian forces and air defenses to Lebanon border please Russia.Keep syrian forces close to Israel and Iddlib attacking zones.

The only negotiations that the Kurds can carry out is with the Syrian government and on the terms of their surrendering the lands they were occupying.

I wonder what the arab population will do to the kurds now their patrons are leaving.

This is exactly what needs to be done. A progressive expansion of Syrian government coalition forces and administrative capabilities into regime change held area without hostilities.

A lot of SF posters will be eating humble pie right about now, I know a lot of you have been saying this would never happen, but look, it’s actually happening. The Arabs and Christians and everyone else but the Turkmen will now embrace Assad and the Russians, and either join the SAA or become affiliated militias, and half or most the Kurds will be left as a separate fighting force to deal with the Turks themselves. The plan to get rid of Erdogan is well on the way, Putin and Trumps plan that is.