Russian military have delivered about 28 tons of humanitarian aid to Syrian civilians. 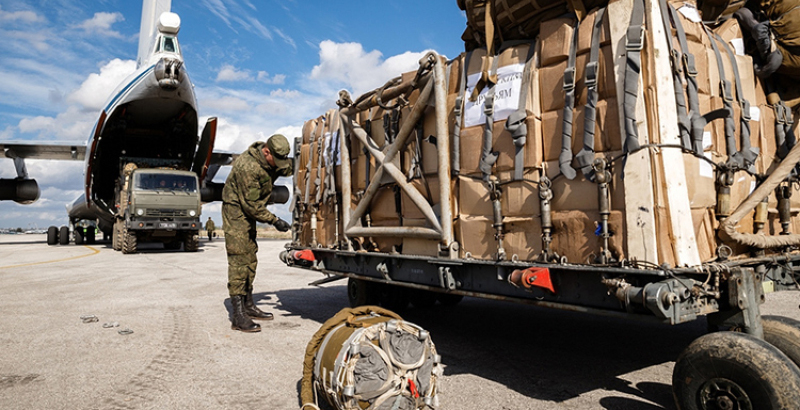 Russian planes have delivered more than 20 tons of humanitarian cargo to the Syrian city of Deir ez-Zor, the Russian center for reconciliation of the warring parties in Syria reported in its news-bulletin.

“Using parachute platforms, Russian planes delivered 20.6 tons of humanitarian goods (food), received by the Syrian authorities through the UN, to the area of Deir ez-Zor city,” the center’s statement reads.

According to the center’s news-bulletin, for the past day, Russian military distributed almost seven tons of humanitarian aid among Syrians in the provinces of Aleppo, Dara`a and Homs.

According to the report, in total for the past day, representatives of the organization conducted nine humanitarian actions in the Syrian provinces of Aleppo, Hama and Dara`a. The total weight of the humanitarian goods, transferred to population, was 6.8 tons.

Thus, 2.2 tons of bread, 3,000 portions of hot food and 300 food packages were distributed in the Aleppo’s neighborhoods of Kadi Askar, Ashrafiya, Bsharah Al-Khouri, Sheikh-Said, Al-Hamdaniya-4, Sheikh-Maksud and Khaleb Al-Qadim, as well as in Ajami settlement in Aleppo province.

Residents of Salamia settlement in Hama province and Khabeb in Dara`a got other 650 food packages.

In this way, in total, 3,950 people received humanitarian aid.

20 tons air dropped to Deir Ezzor, this is great news. The SAA heroes there will hold their front lines. Daesh forces are being bled dry here. Let’s hope for a counter attack soon.

I think Daesh is desperate for grains since they’re now engaged in a pitch battle with the Kurds for Karamah. That’s a town along the east bank highway where the highway from Hasaka terminates. Down the road a piece is Al Kulayb and it’s grain silos, which were captured recently by the Kurds. The Kurds also captured the grain silos at Shanina, which is close to Raqqa. The only other grain silos held by ISIS are way over near the Tabqa Dam at the Suwaydiya Ag. Silo & Storage Depot Complex. That’s right next to Big Suwaydiya which is controlled by the Kurds so probably expect to lose that place fairly soon. Daesh even sent a force across the river to put pressure on the Kurdish held town of Khass Hibal which is near the Al Kulayb silos. Grain sales was a steady source of income for Daesh along with oil products. Can’t pay your hired help if you don’t have any products to sell.