Government forces, led by the Syrian Republican Guard, have taken full control over the Harbisha area after a series of clashes with ISIS terorirsts on the Palmyra-Deir Ezzor road.

Earlier, government troops secured Wadi Didi, the Al-Taybah crossroad, Talat al Krad as well as the nearby points. According to pro-govenrment sources about 10 ISIS members were killed and at least one 1 vehicle was destroyed during the advance.

The Republican Guard and its allies are rapidly advancing along the road to Deir Ezzor as well as in the areas north of it because ISIS has redeployed a notable number of fighters and equipment to southern Raqqah.

On the one hand, this allowed the terrorists to create a threat to government forces deployed near Maadan. On the other hand, this opened additional opportunities for government troops advancing in the  area of Sukhna. 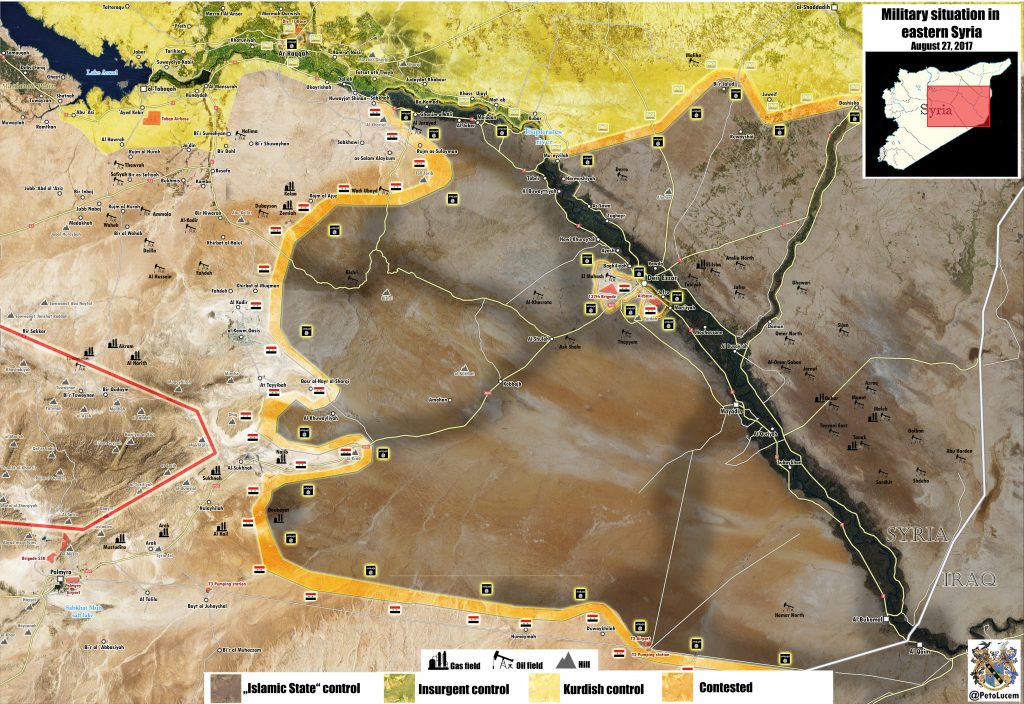 AMN: According to an informed military source, the government troops imposed full control over the strategic Bishiri mountain located to the west of Deir Ezzor city.

If this map is accurate. Government forces are clearly advancing parallel to the river through the open desert west of it where regime change forces can be obliterated with air strikes and heavy ground weapons ahead of the advance: https://www.youtube.com/watch?v=ReIL-mJDDn4

These are all videos, and old russian knows where this happened. We really want to see videos related with what is happening right now around Deir Ezzor, I hope Russia is able to put some of them on youtube or here.

See how they can hit them when they’re moving or sitting still 24/7. Most of central and eastern Syria away from built up areas are kill boxes and death zones for Israel’s regime change cannon fodder: https://www.youtube.com/watch?v=QB_oea5fG4E

Very good news, keep going, the war is over until it is over (terrorists are totally eliminated, hard and moderated). With a strong support of aerospace russsian army it is possible to reach Deir Ezzor this week, be brave and do not be afraid of anything (terrorists).

Not at all – the Idleb terrorists and traitors could still be supplied over dark channels from Turkey.

I think, that the general plan of the SAA, is to come in contact by any means and soon as possible with the garrison in Deir Ezzor, the problem is the flanks, they are far from secured yet, as we see in Maadan, but all, is not only tactical, the contact (at last) with the heroic SAA soldiers in Deir Ezzor will give a huge moral boost to the troops that is not to underestimate it.

Perfect combination the both of them, great!

“According to an informed military source, the government troops imposed full control over the strategic Bishiri mountain located to the west of Deir Ezzor city.” (AMN). The pre-last step to reach DE City by the Souknah front.

Jew slave terrorists serving Israel have nowhere to run and nowhere to hide from the Syrian government coalition in the 99% of vacant desert in central and eastern Syria: http://nationalinterest.org/files/styles/main_image_on_posts/public/main_images/drone_pd_42916.jpg?itok=Qjx2Gvgo

It’s beginning to look like ISIS thinks Maadan is more important to them than is Deir Ezzor. At this point I can’t figure out why.

If the US head-chopping, heart-eating rapers are busy in the north and west, does it follow that they are weaker in the south and we can expect a sudden Syrian move near T2?