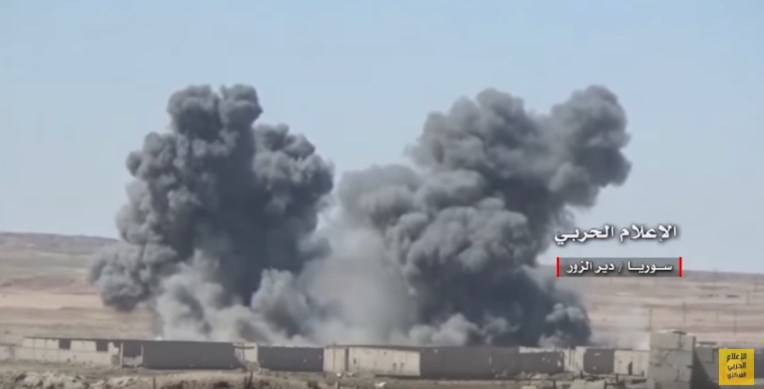 The Syrian Arab Army (SAA) Republican Guard and the NDF captured the Abu Hassan hill and killed 11 ISIS terrorists during the attack, including their commander “Abu Ayham al-Masri” [Egyptian national].

ISIS terrorists tried to regain the lost positions but government forces repelled the ISIS counterattack. The ISIS-linked news agency Amaq published photos showing an SAA soldier being a target of an ISIS sniper.

The Syrian and Russian air power bombed ISIS positions in the districts of Al-A’mal, Al-Mouzafeen and Al-A’rfi in Deir Ezzor and in the vicinity of the Deir Ezzor Airport.

Fighters of the Republican Guard, the Military Intelligence and the NDF are currently trying to link up the government-held area in Deir Ezzor with the Deir Ezzir Airport. If this is done, this will allow to re-establish a ground supply line to the Deir Ezzor Airport and to expand defenses in the city.

Fine RG of SAA and allies. Keep them under action and bring them their 99 virgins.

Congratulations. Continue this way and you will see that the final victory is closer than expected.

I regret and greatly for disappoint you and all the terrorist sponsors of the area but the final victory of Syria with all its brave allies will be much sooner than you and the others dream. Much sooner, my friend.

Its incredible They managed to survive this long. The SAA can’t be expected to relieve the siege this summer. This summer will be about fighting around east Damascus and North Hama, and just holding onto Palmyra.

This last is the soundest comment. SAA is surviving, just. Its population hardly.

Surviving till next year seems, to me, unlikely. Their resources are being degraded day by day. Supplies are scarce and hardware cannot be replaced. Turkey is still supplying hardware to IS, see reportsw elsewhere.

In my mind, giving the heroics of the local SAA and the plight of its civilians, SAA and Russia shoulddo more to aid them.

I would imagine that Assad’s generals had enough sense to provide the trapped soldiers and civilians at Deir Azzor with the means to raise fruit, vegetables and small livestock inside the areas they controlled. They have access to plenty of river water and most likely don’t have to dig deep for wells. Agriculture was a mainstay of the Syrian economy so probably have plenty of folks there that know how to get the maximum production out of limited space. They have plenty of flat roofs for container gardening using hydroponics and can grow seed bearing weeds in marginal soils to get chicken and fish feed (fish grow just fine inside barrels). They can raise rabbits on clippings taken from other plants being grown along with big white lab rats that will eat anything edible throw in their cage (I’ve eaten rats before when my Boy Scout troop was out on Live Off the Land Camp Outs. Snagged them in traps along with some squirrels and they both taste about the same).

It is always nice for someone to be optimistic and to read an optimistic story.

You might be, for the sake of the civilians, correct, but I doubt it. Time will tell.

Resolving East Ghouta situation would release anything up to 50,000 soldiers for other things. We are looking at a tipping point that is approaching. It is also closely tied to the jihadi morale. It cannot be very high even now, as they have been losing territory constantly for a while now. Somewhere along the line they will start asking “what is the point?” Even now in Hama/Latakia some local commanders of the jihadists have refused to carry out orders because they judged them to be incompetent (read “they are sacrificing us for nothing”). Things should start looking up soon.

the question is, what will do these 50 000 troops? one year ago i would be as optimistic as you. inbetween is clear, that the local kings (officers) tell, where can go fight the soldiers. in syria is war. and assad was not able to change this stupid paragraph. we will see, how many from these 50 000 will really take part in fights in another regions of Syria.

I have no information about the number of SAA military occuopied in East Ghouta. I doubt that it is 50.000 as that would be about 40 to 50% of SAA.

Even if it were, resolving East Ghouta would only release part of them, not the whole of them.

Furthermore, I doubt the SAA would priorityze DeZ as to committing all of those military. Idlib, Daraa and other places would take most of them.

I share your optimism , East Ghouta and the pocket between Hama and Holms both seem close to getting wrapped up . While the Tiger Forces will likely focus on Idlib , the Damascus crew will relieve the heros of Deir Ezzor . I could be dreaming , but , its a good one .