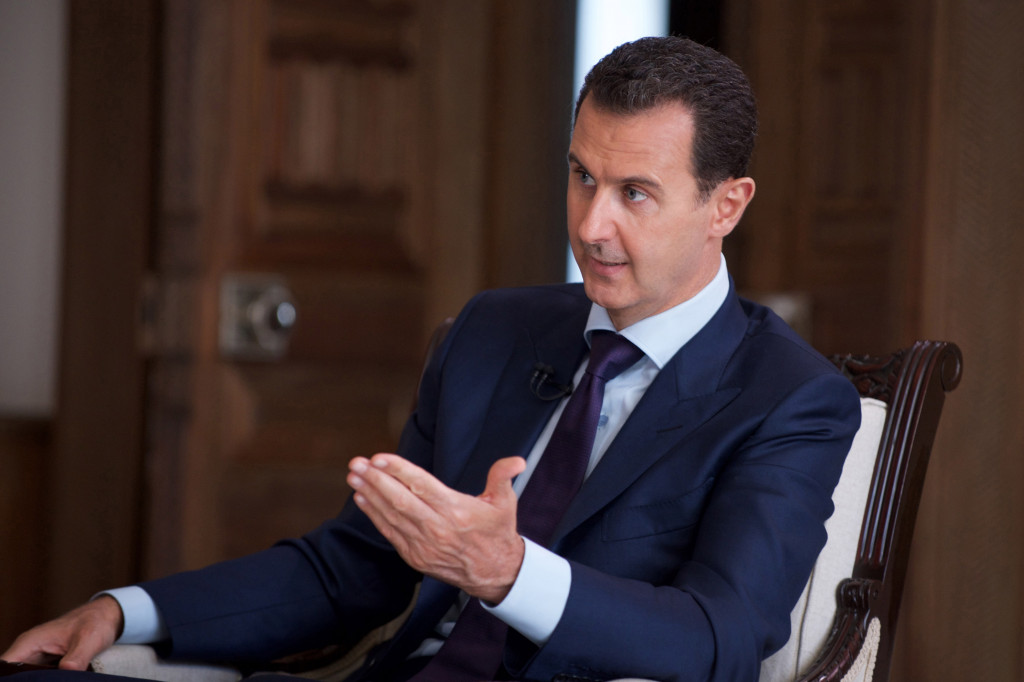 Syria’s President Bashar Assad said Wednesday that it was wrong to link the Palmyra issue only with the deployment of ISIS terrorists from Mosul.

Assad emphasized that ISIS terrorists from the areas of Raqqa and Deir Ezzor were also involved in the terrorist group’s Palmyra offensive. The Syrian president also added ISIS fighters were equipped with modern weapons.

“The truth is the most of terrorists moved to Palmyra from Raqqa and Deir Ezzor with a direct US support or at least the US allowed Turkey, Qatar and Saudi Arabia to assist and supply ISIS terrorists to finish this mission. What is really going on in Palmyra,” Assad said in an interview to the Russian state-run “Russia 24” TV-channel.

How long is Russia going to let the liars of the west to continue to kill Russian soldiers? How can Russia not be seeing these troop movements…4,000 fighters moving across open terrain not seen? If this continues, the Russian citizens will become vocal about getting more serious…maybe this is what Putin wants? As for the militants & family not adhering to withdrawal terms and attacking SAA in Aleppo…forget prison, give them a burial.

This isn’t how russian mentality works. Even if we suddenly lost half of our forces in Syria (just lost, without strategic difference), it wouldn’t push population’s buttons. And “liars from the west” already killed millions of CIVILIANS in 90s, what would make a difference after that?

Russia already lost this war. After every few days they beg US for peace and mercy.

While I’m sure that the Americans have no problems whatsoever with letting IS do its dirty work by attacking the Assad regime and not doing anything to stop IS when they see it preparing to attack Assad. But lets keep things real, Mr. Assad, your forces and allies were napping on the job and let the ball drop, pure and simple. And when your forces are caught napping on the job with their pants down there will be hell to pay, pure and simple.

Americans do nothing against ISIS because they are their main sponsor, supplier, adviser and strategist. That explains their temporary successes. And I say temporary because I still believe in Russia and it is only a matter of days or weeks before Syria with all its allies takes ISIS out of Palmyra and the whole territory sending them straight to hell once and for all

Russia, and Syria have used Palmyra as bait, and the rats have entered the trap. It takes hundreds of tons of ammo, food, and water ( a min. of 34,000 lbs of water per day) to support 3 or 4 thousand terrorists. Thus they lack the logistical capability to sustain the attack. Once they are depleted they will be easy prey for Russian, and Syrian air power.

yup, we saw last time, how easy pray was…

I have a feeling that we are missing the real story. Some Syrian bases – like Kuweires – held out for years while surrounded by rebels. And now we see Palmyra falling within hours. And those initial successes may have benefitted from the surprise effect but they keep doing well now that the surprise is over. Those army soldiers may not be the best of the army but isn’t there something on the side of ISIS too? Are they better trained? Do they get better intelligence? Do they have better arms?

Also strange are those reports of bombings. This is a situation where you would expect real air support: planes and helicopters with machine guns. Are they afraid of ISIS air defenses?

Revenge attack for Aleppo’s loss , is not surprising . A couple of thousand up from Diers Azzor , a couple of thousand down from Raqqa , suddenly a serious striking force . Clear to see Raqqa and Diers Azzor , together as a new “Sunnistan” , is the new plan C . And because of its central location could threaten both Syria and Iraq , for years . Destroy plan C before it happens . As Raqqa is already seiged by the Kurds , leave it ! Reclaim the airport at Diers Azzor , reclaim the whole city .

Assad , Syria , you are winning don’t give up !

Of course, so What ? after all, the falling of Palmyra is a russian stupidity military tactic or a Levrov-Kerry agreement.