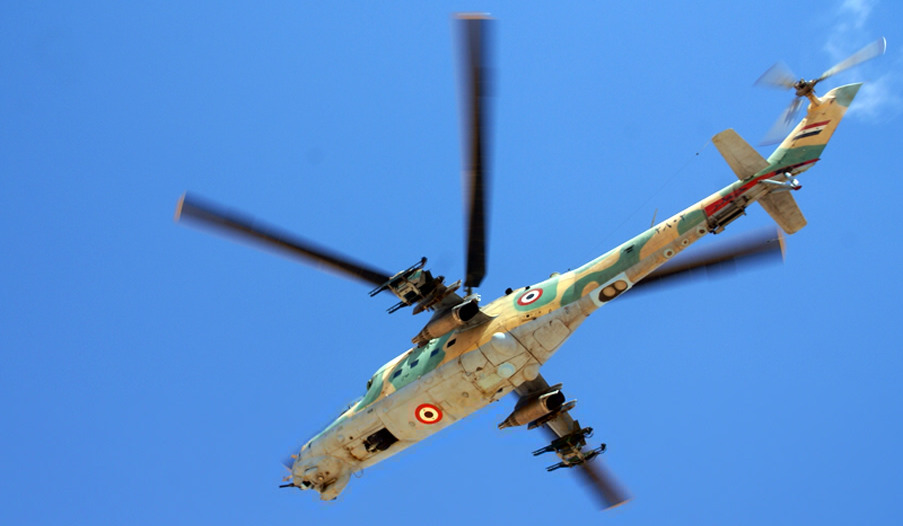 On October 23, a Mi-25 attack helicopter of the Syrian Arab Air Force (SyAAF) made a hard landing in the countryside of Damascus while returning from a mission around the ancient city of Palmyra in eastern Homs.

As a result of a mechanical failure, a Mi-25 helicopter of the Syrian Arab Air Force made a hard landing in the eastern Homs countryside on October 23. The pilot Mohamad Taher Nadim Abdullah, was killed in the accident. The helicopter was heavily damaged. pic.twitter.com/yqgBYILSeg

The SyAAF operates some 25 Mi-25 attack helicopters of basic export version. A few years ago, Russia supplied Syria with a number of the more advanced Mi-24P variant which is armed with a side-mounted 30 mm GSh-30-2K twin-barrel autocannon and 9K114 Shturm anti-tank guided missiles.

Earlier this year, the air force began conducting armed patrols with Mi-25 and Mi-24P attack helicopters along the Homs-Deir Ezzor highway and around Palmyra in order to keep ISIS cells in the central region at bay.

Despite its limited resources and high-rate of operations, the SyAAF rarely losses equipment in non-combat related incidents.

Unfortunate, rip. Your brothers and sisters will pick up the battle and clean out Syria of foreign garbage.

The courage of the Syrian Arab Airforce is enduring.