SouthFront is a non-commercial crowdfunded endeavor that operates on readers’ donations. Since September 1, SouthFront has collected 920 USD. This is about 19.5% of the minimum monthly budget [4,700 USD]. Turkey’s Operation Peace Spring once again drew wide attention not only to the so-called Kurdish question, but also to attempts of Ankara to create a unified Syrian opposition as an alternative to the Assad government. According to official Turkish statements, the goal of the operation is to secure the southern Turkish border defeating “the terrorism” and allow up to 2 million of refugees to return to their homes. Nonetheless, there are no doubts that the operation, like previous military actions in the provinces of Aleppo, Lattakia and Idlib, will be used by Turkey to expand its own influence.

The Turkish-based Syrian Interim Government headquartered and Turkish-affiliated militant groups would be used as a tool of projecting Turkish military and political influence in the area. The Syrian National Army (SNA) are a brand of militant groups participating in the northeastern Syria offensive. Turkey’s Operations Olive Branch and Euphrates Shield demonstrated that the main goal of such groups is to serve as cannon folder on first line of the battle, while aircraft, battle tanks, artillery and special forces units of the Turkish Armed Forces do the main work. This allows Ankara to pretend that its actions in Syria are not military occupation, but a move needed to return the territory to the moderate Syrian opposition that opposes the ‘illegitimate regime’ of President Bashar al-Assad.

In the area of Greater Idlib, Turkish-backed factions formed the National Front for Liberation in May 2018, which was promoted as a moderate opposition coalition that would limit the influence of Hayat Tahrir al-Sham and other al-Qaeda-linked groups. Despite claiming to have 70,000 fighters (sic), the coalition immediately lost a struggle for power to its al-Qaeda counterparts and became a subordinate to Hayat Tahrir al-Sham. In 2018 and 2019, groups from the National Front for Liberation repeatedly supposed al-Qaeda operations against the Syrian Army. In northern Aleppo, Ankara was more successful because the SNA formed in December 2017 operates only in the Turkish Army area of operations and much more depends on the logistical and supply infrastructure created by Turkish special services. Since its creation, the SNA has included 30 groups with lofty names like the Army of Elite or the First Brigade Command and a very few trained personnel. Despite this, the formation, according to different estimates, includes from 15,000 to 25,000 fighters. Its members participated in Operation Olive Branch and successfully continued receiving salaries ($300-400 per month) after it. Now, they are involved in the operation in northeastern Syria.

Just a few days ahead of the start of Operation Peace Spring, Turkey attempted to unite the National Front for Liberation and the Syrian National Army. On October 4, the groups even released a statement claiming that they had merged. A few hours after the release, fierce clashes between the groups erupted over properties seized in the Afrin area. This put an end to the unification efforts at least for now.

Another problem is that the Turkish-based Syrian Interim Government and especially its Defense Ministry have no real influence on SNA detachments because it had no levers of influence over funds, weapons, ammunition or even orders that they receive. The full control over these sides of the SNA life allows Ankara to successfully manipulate them, when these groups are needed to some military action. At the same time, this approach undermines attempts to create a unified command to manage these groups because commanders of these groups are constantly engaged in an internal struggle for control over weapons and money flow from their Turkish backers.

This explains why immediately after the end of the active phase of Operations Euphrates Shield and Olive Branch, the SNA dispersed into competing armed groups mostly concerned by looting properties in the seized areas and protecting racketeering of local business and markets. Therefore, the Turkey-controlled part of northern Syria was turned into a safe haven for drugs and weapons trafficking, and organized crime. Turkey’s iron hand once again turned competing gangs into a united force under the SNA brand for Operation Peace Spring. However, as soon as, the active phase of operation ends, the Turkish-controlled part of northeastern Syria will experience consequences similar to those faced by territories captured by Turkish-led forces in 2016-2018.

The so-called SNA is a collection of rebranded Wahhabi terrorist headchoppers and these savages are up-to their old cowardice again,shooting civilians and executing prisoners. Their Turkey masters have cobbled together a motley collection of the worst degenerate filth on the planet to steal Syrian lands.

Best thing Turkey can do is to set in place a buffer zone, it will by then know every lowlife they paid while doing so, and then pay members of each group a bounty per actual head of members of other groups.
That tactic worked well for the British during uprisings in mid 50’s Kenya, true facial recognition software not available in 50’s but is today
In US we have been wondering why Trump pulled troop out of Syrian border area, but real reporters both mainstream andbindependent have listing of over 190 differentTurkish firms, including an under construction of a Trump Tower, and to the tune of many hundreds of millions USD.
Some of which even have Erdogan family in partnerships and investment and list of names mandnfirms as partners range from ,Israel, Germany, Saudi Arabia, UAE, US (think Alcoa), UAE Banks, damn what a nasty spiders web.
KURD lives have always been cheap, no more than pawns to be sacrificed, and Trump in order to protect his ass and assets will not care if Kurds pay his bills.
There are truly evil conscienceless people that are in positions of governments worldwide, but they are not alone, for within each of thosennations we have huge numbers who volunteer for military, indoctrinated millions that live relatively affluent lives, “(Bureaucrats) that support them while each go about grubbing for a living with no care of others who die or suffer.

Karen Bartlett
Reply to  Hide Behind

It’s not just Trump, though. Libya fell under Obama and Clinton, and “regime-change” in Syria was their idea. And they all support the evil State of Israel. They all, no matter which main party, are a bunch of opportunistic thieves and murderers, imo.

Hide Behind
Reply to  Karen Bartlett

Agree whole heartedly.
Been on internet since even before it became publicly available and since then have found individuals and groups who try and point out the corruption we find ourselves surrounded with.
An interesting fact is that Obama and mate since leaving office have gained over 75 millions income

Well, whaddaya know? I’m glad to know this history. I believed the Turkish b.s. about liberating Syria from terrorists and thought they intended to help Syria. And that they wouldn’t harm civilians, which i soon found out wasn’t the case. Syria knew all along, of course, and started moving troops north immediately. Thank God. And maybe Pres. Trump agreed to remove troops b/c he was depending on Turkey instead of the Kurds to grab Syrian land and try to overthrow the legitimate gov’t of Syria! Hands off Syria! May God protect Pres. Assad and the SAA! 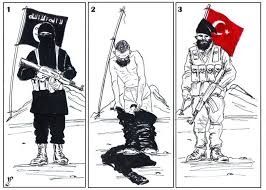 Moderate rebels who fight for freedom will always have quarrels about priorities.
Someone wants Green energy as first priority, others want Gay marriages promoted and finally someone think we should prioritise Global Warming.
All societies have quarrels like that, nothing unusual as long as we all fight for the same umbrella which is freedom, because they also have quarrels as we have it. Everybody have it.
And if you are looking for Evers to steal, you wont find any Evers at us.