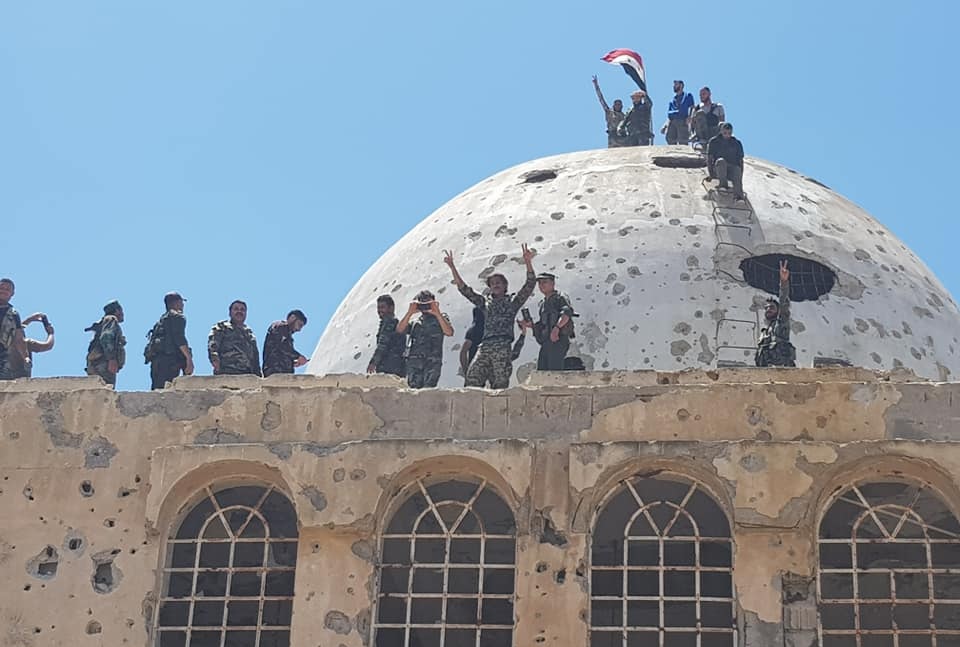 On July 26, units of the Syrian Arab Army (SAA) entered the strategic town of al-Hamidiyah near the occupied Golan Heights in the southern governorate of al-Quneitra, according to the Syrian Arab News Agency (SANA).

The deployment of the SAA in the town is a part of a reconciliation agreement, which was reached last week. A day earlier, the Free Syrian Army (FSA) groups in al-Hamidiyah and several areas around it began handing their weapons to the SAA.

Syrian pro-government activists also reported that the SAA entered the city of al-Quneitra, south of al-Hamidiyah, and raised the Syrian flag over its historical ruins. In 1974, the Israeli military destroyed the city before withdrawing from it.

Currently, the remaining fighters of the FSA and Hay’at Tahrir al-Sham (HTS) are hiding in the towns of Jubata al-Khashab and Turnejeh, north of al-Hamidiyah. These fighters will likely accept an evacuation agreement in the upcoming hours.

Come on, another good day, apart from the deaths of the “heroes of Syria”, but please finish it off now.

Reinforce Idlib area, where all the vermin are – and then crack over to the dessert West of DeZ (eliminating any hostile on the way) and finish that off, or of course drop a “Son of all bombs” on it and save some time.

Reinforce around Al-Tanf including air defence and then go and enjoy eliminating the NE scum.

Once done the SDF will be shitting themselves, so do a deal that future discussions will be held, if they join up, finish eliminating ISIS and turn of the Yanks North and in Al-Tanf.

Such is our function.

Sounds like the SDF is already looking to a post us future. Everyone knows us involvment wont last now that Trump is thwarting his deep state enemies.

The Scumbag israhellis love destroying,why did they have to destroy the city before they left.??..Please GOD one day the same things will happen to their illegal squats everywhere.