On July 26, the Syrian Arab Army (SAA) 4th Division secured the key towns of Jillen and Hayt in the western Daraa countryside following heavy clashes with fighters of the ISIS-affiliated Khalid ibn al-Walid Army, according to the Hezbollah media wing in Syria.

Few Hours ago, the 4th Division destroyed the Khalid ibn al-Walid Army defenses around Jillen and captured several position inside of it. Pro-government activists said that many former fighters of the Free Syrian Army (FSA) had participated in the attack on the town. 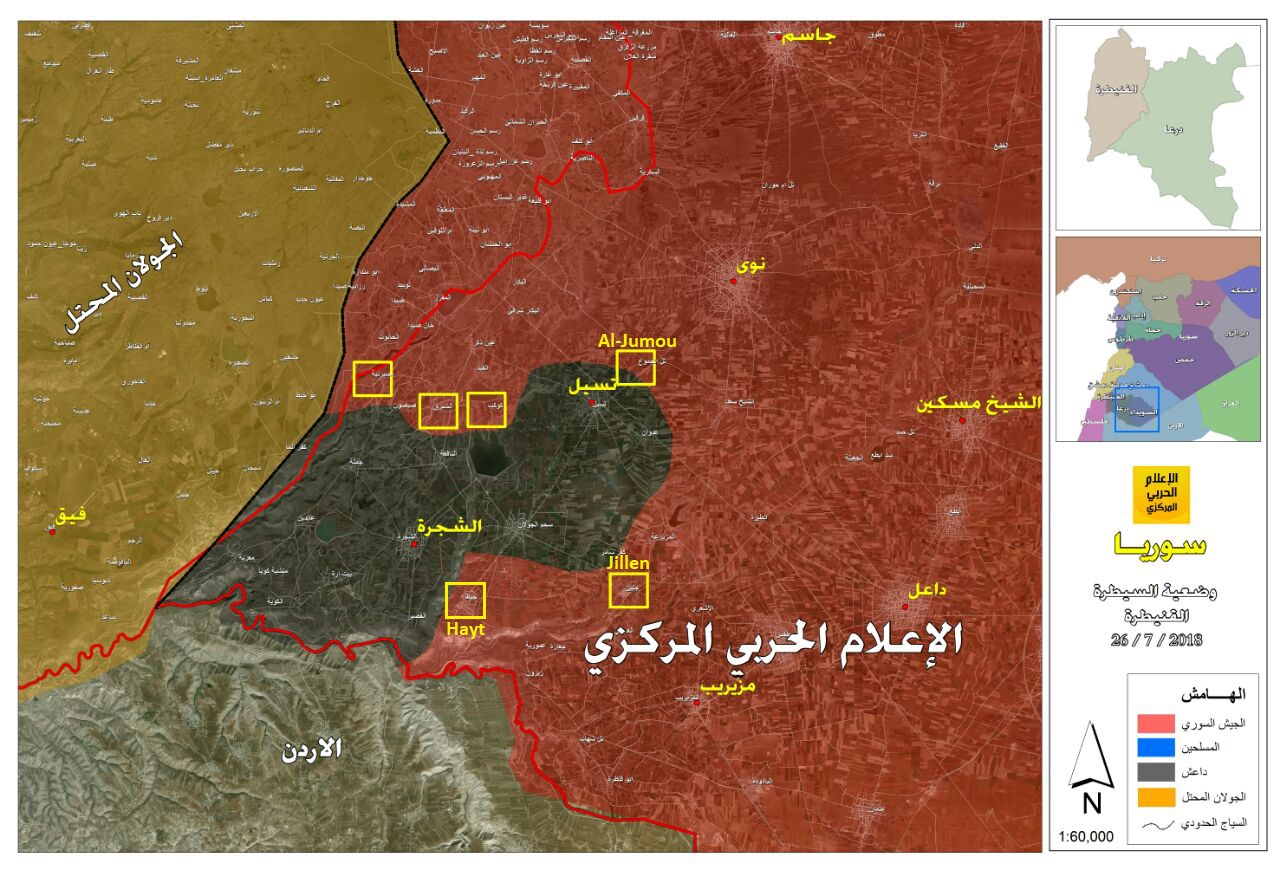 Meanwhile, the General Command of the SAA announced in an official statement that units of the SAA captured the strategic hill of al-Jumou and four positions around it from the ISIS-affiliated group. The SAA is now removing IEDs and mines, which had been planted by Khalid ibn al-Walid Army fighters.

According to a report of the Syrian Observatory for Human Rights (SOHR), the remaining fighters of the Khalid ibn al-Walid Army are now hiding in the towns and villages of Tasil, Saham al-Jawlan, Jamlah, Abidin, Kuwayyah, Ma’arriyah, al-Qusayr and al-Shajarah.

Almasdar says that Tasil and Adwan are also under SAA’s full control. It’s possible because the hill of al-Jumou dominates both these settlements.

WE NEED TO SEE DEAD ISIS BODIES EVERY WHERE

Tudor Miron
Reply to  MADE MAKER

Can’t agree. We should not get on the same (bottom) level as daesh and other trash. Kill them if they present danger (which they do) and don’t surrender but we should not allow mokery of dead bodies.

I agree Tudor. Mockery of the dead only lowers one to a level far below any animal.

With conventional armies of 1st World nations in recent times it has only been the American military that has engaged in such practices , along with torture of course.

“the remaining fighters of the Khalid ibn al-Walid Army are now hiding in the towns and villages of Tasil, Saham al-Jawlan, Jamlah, Abidin, Kuwayyah, Ma’arriyah, al-Qusayr and al-Shajarah” Find and capture them all. If they do not wish to be captured, allow them to meet with Allah at the Gates of Hell. These Mercenary Jihadi Salafist Terrorists showed no mercy to anyone that disagreed with them: no mercy towards women and children: no mercy to the old, the sick and the infirm: they should be forced to remain in custody in truly primitive conditions for the rest of their miserable lives but if they don’t believe in accepting this mercy, a bullet to the head will accelerate their journey to perdition and to Hell.

Those former Southern Front Cuzins are coming in Handy! They might’ve finally broken the defense lines last night and are advancing a lot quicker!

BTW: can someone edit the Wikipedia article for the Southern Syria Offensive?, have the southern front switch sides?

You can call me Al
Reply to  antoun

Spanish, English and french in one sentence…. !!!>

Damn right SI. Is that a lotus on the left ?.

God almighty, I am crap.

I am getting closer though, next time, I may get at least the Country of origin correct.

The first Lotus. But thanks for the info….ahhh, the old Morris minor my Dad had.

Yup, now give me an uptick, you tal y tal perezoso

The reconciliation of the so called FSA illustrates the tragedy of the war in Syria that has pitted Syrian against Syrian due to the malign influence of the US Coalition of Terror, whose actions and their consequences in Libya should have been a warning to all who trusted that their future would have been an easy life if they deposed Syria’s elected government.

There is no such thing as utopia in real life and a brief look at the large proportion in the USA who are forced live in abject poverty is an example that all should look at.

Many tens of thousands of Syrians are now joyously welcoming liberation by the SAA and Allies from the Wahabi dystopia that they had been subjected to by the US Coalition of Terror.

u·to·pi·a yo͞oˈtōpēə noun an imagined place or state of things in which everything is perfect. The word was first used in the book Utopia (1516) by Sir Thomas More.

Yes, and it well describes the hysteria in USA today ,in that ‘Mericans’ mostly believe that imagined fantasy.

The zionist terrorists are on the run.

Matew, thank you very much for the comment, it is great amusement to read a comment of a horrified zio-terrorist in a state of hysterical panic! :)

What a load of crap.

Why do you use the Syrian Observatory for Human Rights as a source, South Front? The “organization” is a one-man operation run out of London and is a supporter of anti-government forces in Syria, such as the FSA and SDF and other militants and “moderate rebels” who have been shown often to work with ISIS, Al-Nusra and Al-Quaeda. I’ve contributed to your channel previously, but no more.

Just an aside: the US Federal Rules of Evidence permit the use of a statement against one’s interest as evidence, not proof, for the truth of the matter asserted therein. This is an exception to the hearsay rule, which bars the use of an assertion as proof of the matter asserted therein. So if the guy on the sofa at SOHR writes something that reveals a matter that weighs against his natural bias in favor of his paymasters, it’s at least worth considering.

The ISIS pocket is going to divide into two parts.

Putin hate Netanyahu more than a pig. Don’t be confused by their meetings. Putin knows well that Israelis are US and UK proxies. The Israeli espionage network is everywhere in Russia, in Russian former states and in China. Israeli migrants steal Russian and Chinese classified weapons research Technology for US and UK.

The Lime water and Milk both look similar but taste is different.

How fast can these terrorists run?

It doesn’t matter. They have nowhere left to go.

If Erdogan lonely attack on SDF, PKK etc. So this could create problem for Turkey itself.

If Erdogan invade Syria, then all Syrian and allied forces will move to North due to which a vacuum can generate in South Syria which the US proxies Israel could easily fill. Then it could means that Erdogan fight for greater Israel.

Yes as a good wise neighbour and as a good Muslim Erdogan can play fairly by joining Assad government whether he is good or not and can expel foreign troops and terrorists from Syria. A strong and a happy Syria is the need of Turkey itself.

Update – 10 mins ago……”After several secretive preparatory/scoping meetings, the [U.S-backed] PYD/SDC is “in Damascus to discuss administrative and military matters,” as per its President, Riad Dirar.”

and then you get this BS….. “A delegation from the International @Coalition visited Manbij city today, with a special task: to observe the security and stability prevailing in the SDF-held city. Later, they held a meeting with MMC and Manbij Civil Administration.”

Soon, my pretties, soon. Soon those virgins will be all yours. Those poor, poor, dungeons and dragons playing nerdy virgins.

Laughing at your own jokes?

So not only do you laugh at your own jokes, now you try your hand at insult comedy? Color me unimpressed. You get an F for trolling.

And also up voting yourself. Do you hang out at Liveuamap “discussions” usually ?

It has an abundance of lame comments. You may find the maps interesting, but the reporting is mostly from Twitter. :(

Thanks I will check it out!

IS THERE SOMETHING ELSE THAN DISQUS? THEY ARE CENSORSHIPPING ME!! FOR A NORMAL ZERO HEDGE ARTICLE

THERE WAS NOT A DAMN THING RACIST ABOUT THIS WHITE HELMETS ARTICLE DISQUS-TRAITORS!!! FILTHY WESTERN LAPDOGS

There you Go Filthy Goebbels-Loving-Disqus

Is the Jordanian border closed to Daesh? What will happen to them if they try to cross it?