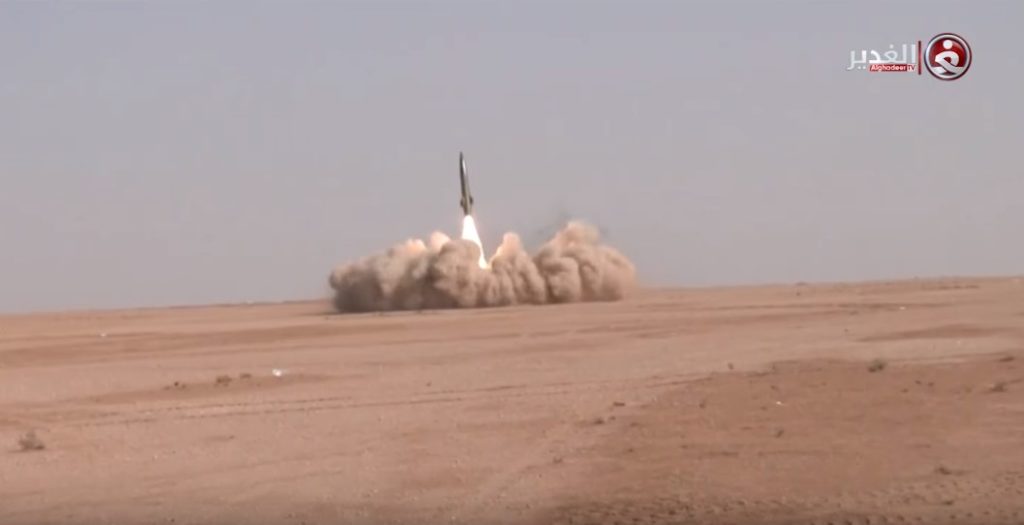 On November 17, a fierce fighting continued between pro-government forces and ISIS in the Syrian city of al-Bukamal, near the border with Iraq.

Earlier this week, the Syrian Arab Army (SAA), Hezbollah and the Iranian Islamic Revolutionary Guard Corps (IRGC) once again entered the city. The advance was supported by massive artillery and air strikes on ISIS positions there. The Syrian military even used a Soviet Tochka-U ballistic missile against the ISIS positions.

Since then, the fighting has been ongoing.

The ballistic missile launch can be found at 0:40:

On November 16, the SAA and its allies stablished a full control over Tal Salasse, the silos, the village of Hamdan and the airstrip near al-Bukamal. 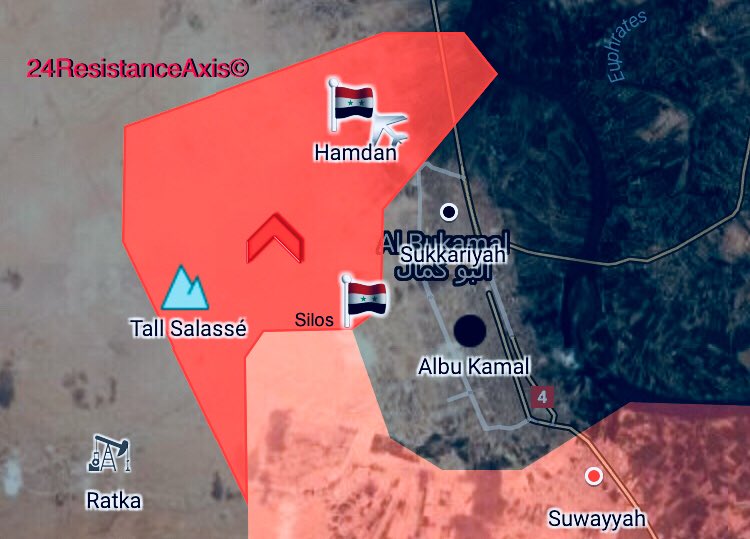 You can call me Al
Reply to  Zainab Ali

and then trash the Zio scum.

It might seem disappointing that the Syrians are having to capture the town twice but when the US head-chopping, heart-eating rapers stand their ground it’s easier to defeat them than when they adopt guerilla tactics.

SAA is very weak army, including the Tiger force. SAA does not represent that can defend Syria. Addition to bad strategic and tactical planing, there is no cooperation between different units. SAA lost AL-BUKAMAL city because SAA Tiger force went on vacation, allowing ISIS to move it units from Northern front to AL-BUKAMAL city and SAA Tiger force done nothing to help units advancing in AL-BUKAMAL city or South. It maybe is political games by SAA Tiger force command, trying keep power in SYria, by beading other units and he waits with his units. I sow such maneuvers in different time and war. One side let the other side (alliance) start the advance, while the other wait till to first one being destroyed. Let the enemy destroy the competitor. Anyway, SAA is very weak army

Yes, John Doe should know very well that combat units need to rest and refit after intense periods of battle , such as the liberation of the city areas of Deir Ezzor. This generally takes at least two weeks or more and sadly the SAA has limited resources in reserve to fill the breach.

Sure, keep resting, while other forces advancing and control of Syria. Nice approach, we need rest while others occupy country. Sure, send more beers and hookers so SAA can better rest. How pathetic!

Exhausted soldiers, even the most determined ones, lose much of their combat potential when exhaustedJoe.

No. In time of war you have no time to rest. Resiliance and sacrifice or lack of it can make you win or lose a war. The Tiger Forces are Russian trained and according to Russian military philosophy troops can withstand months of warfare under the most adverse and tough conditions.

thank god there’s you telling us how it goes in times of war.

the same one that claimed the ISIS T-90 destroyed by USAF A-10s with 30mm depleted uranium.

John, how was it destroyed?

All units in war are rested and refitted whenever possible as men and equipment need rest and maintenance to be effective in future operations.

There is a trade off between ‘individual ‘ rotations and ‘unit ‘ rotations for attacking units where greater unit cohesion is required as opposed to defending units where soldiers on rest days are never too far from the front lines when required and where equipment maintenance facilities are static.

I agree, that is why they need Iran-Hezbolha-Russia ground troops to help Syria army, but mainly aerospace Russia force is the main supported element in this fight. If this support is not good enough, nothing works.

The main problem is that the Tiger forces are acting upon the guidance of Russian instructors who tranied them. Russia is threading on thin ice, trying to defend its Syrian ally, but at the same time trying to avoid getting into direct conflict with the US. Russia has its own agenda and problem especially associated with takling the issue of the ethnic Russian Ukrainians in Donbas and facing off the largest deployment of NATO forces on its own borders. So it is always trying to find compromises. Even when the US directly assassinated its General Major in Syria in Deir Ezzur, the angry rethoric of accusations against the US which conducted the attack soon were toned down, because assasination of a high military official by a rival country is a direct act of war and Russia does not want war with the US. Iran and Hebollah have no such issues. They have already faced aggressions by the US, the Zionist junta and other proxies and prevailed. They don’t fear the US or the Zionists because they are motivated by a just cause and a fervent belief in God’s support. So Russia lets the Syrian government forces, Hezbollah and the Iranian volunteers face off against the US ISIS proxies by themselves while playing the neutral role, which in my opinion is a display of weakness that enboldens Russia’s enemies even more. If I were Russia, one thing I would have done soon after the murder of the Russian general would be to send more aircraft to Syria and the mighty Iskander hypersonic ballistic missile, pointing it straight at the US illegal bases in Syria. But alas! Putin keeps hoping on good relations with the US which at this point starts smaking of sadomasochism!

oh sheez, I can hear the sound of thousands of russians rattling their teeth in terror.

you local trolls really got promoted at a new level these days.

It’s the opposite, USA does not want war with Russia, but they are not aware of it yet. They still think, at least majority, USA has the same superiority it had 30+ yrs ago. Do not argue with those people, it’s futile, for them, Russian tech is 1980 Lada and vodka. That’s it. Just laugh it off. US democracy bringers “aircraft carrier striking groups” and 900+ worldwide bases sucked a lot of money, 20 trillions is official US debt, but do not forget 9 trillions missing from Pentagon, 9/11 was a cover up for 9 trillions and Israeli backed ticket to start remodeling Middle East-end game Iran. US military is Israeli proxy on demand.

I must say I am not really impressed bij Hezbollah, the PMU and the few SAA there as far as their handling of AB city is concerned. A city, a village really, of such a small size holding out against such forces, armed with heavy weapons and supported by CAS and still they cannot really enter the city?

It sounds like the bottom of the barrel is being scraped.

“I must say I am not really impressed bij Hezbollah, the PMU and the few SAA ”

Well, with the benefits of the Obama-supported ‘Arab Spring’, many such towns have in fact become villages!

Am I the only one who’s going to point out that the Russian MoD told a pretty big fat lie when they said Al-Bukamal was in government hands? All of this makes it very clear that the SAA was kicked out (assuming they even managed to make a dent in the first place) and are now bringing all their might against ISIS, and still failing… Even the Tiger forces were ambushed and took loses.

Seems like the high command got overconfident and didn’t plan this out correctly. This just screams poor recognaissance to me.

Syria and allies have a near encirclement Bukumal Drone,SAT,and Communications Intel gathering to locate the underground weapons caches and command. It’s possible and with some luck that ISUS command and key weapons caches removed,and This show could end quickly. They have had time to get ready,….yet they know it’s all lose and suicide stand since Raqqa/Mosul. Russia is being tested now to coordinate this battle and knock ISUS out ,without the battle dragging on for months like other seiges. I think Russia can pull this off and network with the Euphrates Arab clans to not go over to US, Yet to choose Damascus and return Oilfields to Assad . How efficient Russia is will have bearing on how these Arab tribes respond to negotiation.

The problem is that ISIS is attacking only SAA and Russian forces, not Kurds, not Americans, not FSA, NDF,…., and we saw at BBC why is that so, USA and Kurds have an agreement not to attack each other and USA Army helped ISIS to leave Raqqa and Deir ez Zor!!! So Gen. Wesley Clark was right when he said that USA and it’s allies support ISIS in war against Assad and Hezbollah!!!

ya ya, you need to make the russians appear they are lying because you need to convince yanks, especially servicemen, that they are no better than the us.

in the end, somebody on the terrain probably got ahead of himself and declared victory before time.

i wouldn’t exclude usraelis services being behind this somehow too

also, to others, be on the lookout for the folks going in with phrases like “am i the only one that..”

Laughable that some people see SAA as not brilliant because they can’t just walk into Albukamal and declare victory. Firstly SAA chose the southern assault because the route from Mayadeen was heavily fortified – clearly a correct decision to not take it with a frontal assault. AB wasn’t heavily manned, although heavily mined and booby-trapped, so the initial “liberation” was surprisingly fast. But it was still a mine field. The declaration that it was liberated forced Daesh to redeploy from their fortified areas to take the city back. For the SAA contingent in AB it was again a correct decision to retreat to defensible lines, even if that was outside the town. If you don’t have the manpower it is suicidal to stay. Reports of US jamming of communications at this time was to help Daesh redeploy. The redeployment was the objective for the SAA to weaken the northern approach – and it worked as intended. AB is now completely surrounded so the Daesh fighters in the town cannot help their brothers in the north and vice versa. This was a pretty good tactic to split the Daesh force in two. SAA has had to do it the hard way all the way along, in Aleppo and on from there. This is no different. Any notion that AB was just going to keel over in a day is seriously misguided. The initial “liberation” was probably quicker than anyone expected and they probably surprised themselves. No matter, the Daesh main force have played their hand. We know where this is going now. Notice how Iraqi forces have had relatively easier time of it. The target was always Syria, Assad, and the founding of a salafist principality in Deir-Ezzor/Anbar.