On June 25, the Syrian Arab Army (SAA) and its allies launched a new limited military operation against ISIS cells west of the city of al-Bukamal in the southern Deir Ezzor countryside. According to the Syrian Arab News Agency (SANA), the SAA secured 1,800km2 between western al-Bukamal and “point 400” on the Syrian-Iraqi border.

Furthermore, the SANA reported that the SAA killed several fighters of ISIS and destroyed many vehicles and weapons of the terrorist group during the operation. 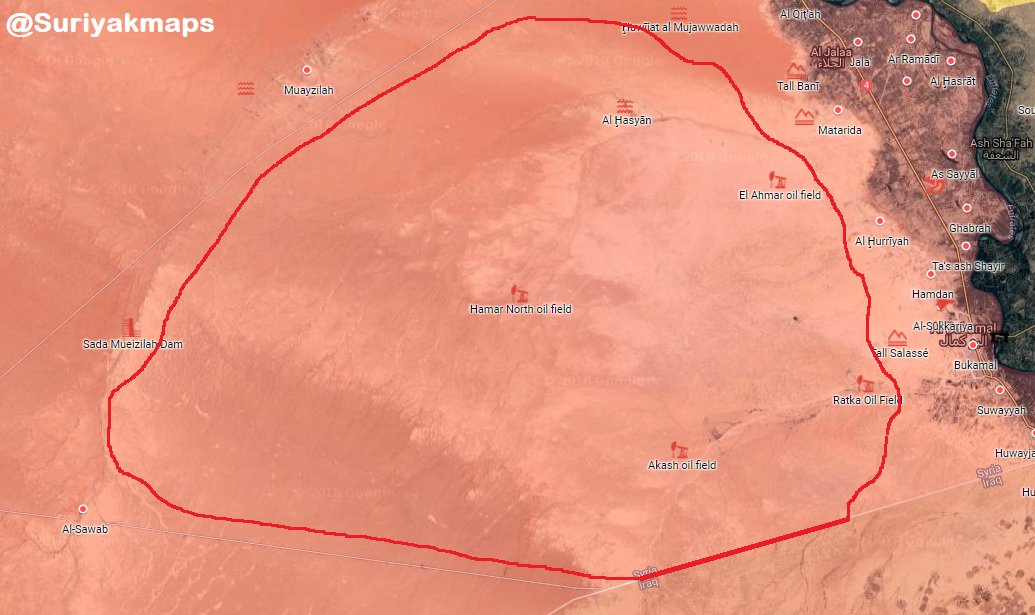 On June 19, ISIS cells shelled several positions of the SAA west of al-Bukamal. A day later, the SAA advanced in the southern and southwestern Deir Ezzor countryside securing 1,200km2 between the areas of Faydat ibn Muiny’a, the T-2 station, M’aizliyah and Dahrat Wadi al-Miyah.

These operations are aimed at deterring ISIS, which is planning to launch a new large scale attack on al-Bukamal, according to a report of the Syrian Observatory for Human Rights (SOHR). The SAA and its allies will likely launch a larger military operation before the end of this year to eliminate the renaming fighters of the terrorist group in the Homs desert.

Did ISIS change into FSA uniforms and retreat?

That would be Logical I think, yes .

The ISIS satellite will give them good intel for moving through the desert safely. NO WAIT: THAT’S A CENTCOM SPY BIRD!

another stupidity you wrote. you are dumber and dumber.

I say these things just to irritate you. Do you not believe ISIS has a source of intel and support ? Did you forget about Mossad, CIA, Jordan and Saudi Arabia ! There are many players in the ME. Does the right hand always know the left hand is doing ?

You dont irritate me.

And how can halp CIA??? Imprtant is russian and syrian intel to see those jihadists. and send 1 fucked L-39 and eliminate them. American Intel can not do anything.

All I know is their left hand is stroking each other off!

I think that hollywood Gandalf also can fly like a bird.

In the end of the south campaign At Tanf has to be eliminated or, at least, neutralized by closer. Without that there will be allways american ISIS in the south menacing attacks till Palmyra.

the occupation of al-tanf can only go on till the missiles come flying right in their faces…..they have to first clear daraa area and get rid of those pricks there…they will probably send last warnings to nato fucks before they start firing(not in public, just like the attack on golan heights with 55 missiles with the message to israel being “if u do attack back we will level tel a viv to the ground” and it worked.

Yes, I presume that At Tanf will be the last move in the south campaign. First there’s Daraa and Quneitra and there’s also the cleaning up of the ISIS cells and remainings in a lot of zones.

It is likely that Idlib will be cleared of the US Coalition Terrorists before Al Tanf is considered BUT letting the US stew in its own cauldron may be advantageous for Syria. After all , the US could easily build a terrorist training base on the Iraqi side of the border with the same effects as they have now.

The US occupied Kurdish zone is increasingly fractious with Arab/Kurd resentment and the US actions in Iraq are reaching a crisis point again , where an IED campaign could well be re-activated to encourage the US Military to bugger off home :)

Politically the US cannot justify hundreds of ‘American Heroes’ returning to the US in body bags and also a greater problem domestically of thousands of US ‘ Military Heroes ‘returning home with missing limbs for all of America to see.

It is time for USA to move out of Syria and stop making ridiculous actions.

Thanks to your comment – now I understand what “renaming fighters” means.

SAA says they have eliminated nearly 90% of ISIS in the region and the attack alleged by Israel was discovered to be carried out by US jets just 200 m from Al Qa’im, seems US is running scared in Syria as they had YPG impose curfews in Raqqa maybe to smuggle across ISIS forces.

I will see in few days, whether is this info true? I doubt.

With your troll eyes you can’t see nothing, not even like someone in the Plato cave.

actually Syria is being overrun by jihadists and they are preparing to take Damascus. you probably deserved a honor seat in the zio-jihadi parade that will take place in the city so that you can jerk off in front of all your masked heroes.

except it’s a wet dream that once over leaves nothing but butthurt jewnazis illwishing.

Translation= ask boss what facts can we make up for this shit?

This was just put up…

Assad: Syria to take control of Manbij by force

Syrian President Bashar al-Assad says Damascus will take control of the country’s north BY FORCE if forces backed by the U-S and Turkey refuse to surrender.

In an interview with a Russian TV channel, Assad said fighting with US-backed Syrian Democratic Forces is not the best option for Damascus. He, however, stressed that fighting is the ONLY way to get control of the country. He was referring to the northern town of Manbij where S-D-F forces hold some territory. Meanwhile, the Syrian president said his country will not accept any fund from foreign countries to rebuild Syria. Assad said Syria has enough strength to do so and if it does not have the money, it will ask its friends for help.

good man…spot on….he learned from the past…saddams fate, gaddafis fate…..dont trust the jew satanic slaves, be it usa,eu, or russia………its YOUR country…..take it back by force…attack them and see what happens when the first french and us troops are hanged nacked over the bridges….they retreat…its always been that way…they are cowards just like in somalia, vietnam,lebanon etc.. a nation that fights back….just like jemen…no more bs….no more deals…no more agreements….america is on the brink of implosion anyway just as the eu and israel….

This just went up.

Syria: ‘West don’t give, they only take’ – Assad rejects offers of support

Syrian President Bashar al-Assad said his Syria would not accept any Western money to help rebuild the country, in an interview from Damascus with NTV’s Irada Zeynalova broadcast on Sunday.

“We won’t allow them to be part of it, whether they come with money, without money, whether they came with loan or with donation or a grant, whatever. We don’t need the West,” said Assad.

“They don’t give, they only take,” he added.

Great and wise decision, I am glad about this.

The SAA is systematically taking control of all areas within Syria and as we can see are crushing all militant pockets when they do not accept reconciliation (terms and conditions apply). President Assad in an interview with RT last week stated clearly that this is also policy of the Syrian Government’s for areas held by Kurds, Turks and all others’ who are illegally controlling or seeking to control the internationally defined territory of the Syrian State. Hence the reason the IsraHelli (Bi)Big Rat who murders Arab women and children daily is putting pressure on the Russian Jew Zionist Oligarchs to Stop the delivery of S-300s and the upgraded Pantsir S1 system. As these would be important tools in retaking Golan.

S300 was never asked, while Pantsirs have been delivered by the dozens. It appears the “Russian Jew Zionist Oligarch” is doing an absymal job in putting pressure.

S300’s were promised by Russia to Syria in 2011, and 2 months ago Russia reneged on that commitment in response to pressure from the empire-in-decline and its ZioNazi master in al-Quds.

Pantsir systems are ideal for missiles and S-300 is good for aircraft not so good against faster missiles.

True, but that was not the point. You stated: “S300 was never asked ….”, which I corrected by referring to Russia’s promise.

That is why S-300 is needed. Syria needs to shot down Israel-USA airplanes. If you do not have planes … how can you make and attack with air-ground missiles ?

Only necessary for radar tracking but can get more of the improved S-200M which would get around the complaints.

Slowly but surely evicting the Americans and their vassals from Syria.