On June 28, the Syrian Arab Army (SAA) and the Republican Guard, backed by the Russian Aerospace Forces, launched a ground attack in the western Daraa countryside.

Minutes after the beginning of the attack, the SAA captured the areas of Sad Ibta, Tell Hamad and the 271st Brigade, according to the Hezbollah media wing in Syria. 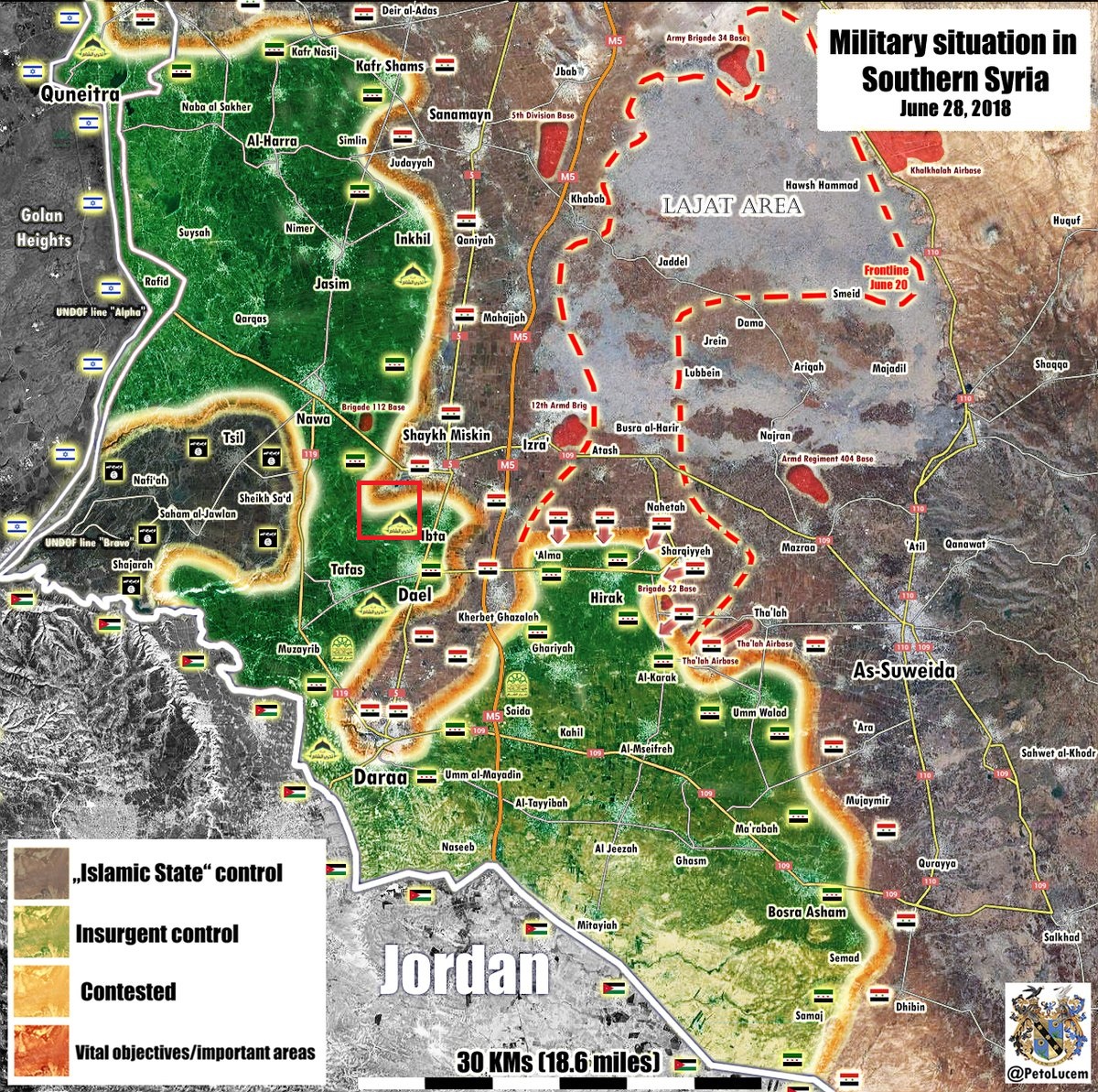 A source in the SAA told SouthFront that the main two targets of the new attack are the towns of Ibta and Da’il. The two towns witnessed large protests against the US-backed Free Syrian Army (FSA) a day earlier, according to the Syrian Arab News Agency (SANA).

As expected, the FSA has not conducted any defensive operation against the SAA in the western Daraa countryside yet. However, this may change soon as the FSA reportedly reached an agreement with the ISIS-affiliated Khalid ibn al-Walid Army, which may allow the radical group to join the fight against the SAA.

The SAA will likely attempt to besiege Ibta and Da’il in order to pressure the remaining fighters inside the two towns into accepting a reconciliation agreement.

This is yet more news that will be ignored by the Western Zionist press :)

Syrian civilians welcoming President Assad’s liberating army is not what the US Coalition of Terror paid for.

The civilians have experienced years of ‘American Democratic Values ‘ and now realise that those values are a pile of shit.

In the British variant, animated with a little song to that girl Theresa: https://www.youtube.com/watch?v=JUke3Hnv8o4

Isis israhelli terrorists are the real enemy,they must be driven out of the middle east, asap.

FSA and ISIS are terrorists, point. Just get rid of them at once.

Israel will concede the area adjacent the Golan heights without a fight, because HTS is the main presence and Russia will not put up with that, Netanyahu is and besides Netanyahu’s secret is out, he was extracted from a Russian Orthodox opportunistic mother who dumped her baby in a offal pit so it could learn to live with the smell of her disgusting behaviours, however when she came back at the end of a session Netanyahu was missing so she took a few lamb chops instead, exactly where he got to was a great mystery until the kibbutz that Moshe was living on published a photo of Dayan without his mask (eye patch) and there was baby Netanyahu practicing with the Cyclops.

It will be fun to see where the Daesh and Qaida Orcs run to when their Orc Havens are liberated! They can go to Israel or through Jordan to Tanf, or maybe US will send rescue flights to fly them to Berlin?