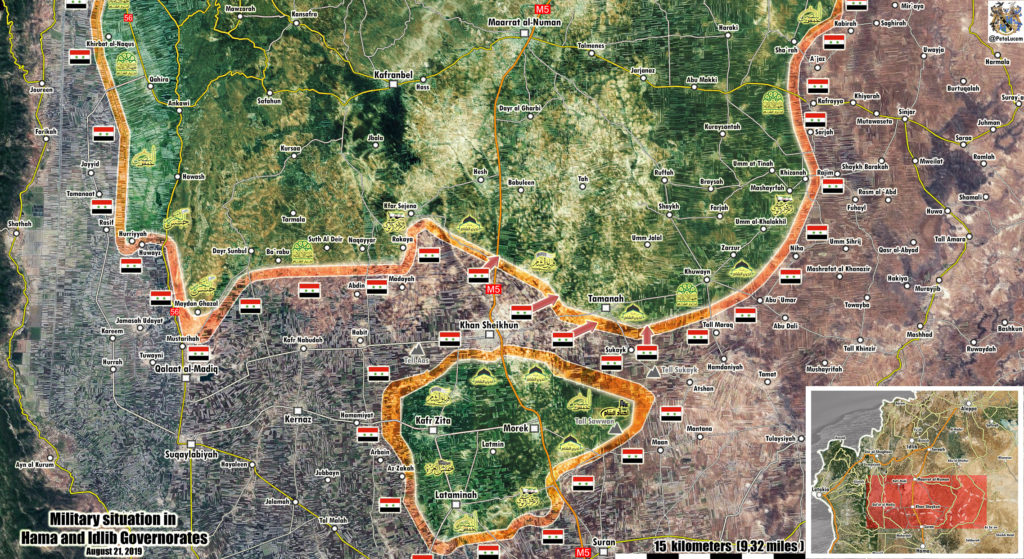 On August 21, the SAA and its allies liberated the key town of Khan Shaykhun and besieged remaining members of Hayat Tahrir al-Sham and other militant groups in the areas of Kafr Zita, Lataminah and Morek.

The fall of Khan Shaykhun became a major blow to Idlib militants that apparently believed that the so-called Idlib de-escalation zone was intended to allow them attacking SAA positions and prevent any possible SAA operations in the area. Ankara likely had a similar view.

However, the reality on the ground appeared to be a bit different.

Now you tell me how these dumbass Turkey goat fuckers are going to survive in Idlib? The liberated area under SAA control is getting bigger and the Turkeys are spread out in penny pockets and should be hit by Kornets AnsarAllah and Hezbollah style. The dumb Turkeys only have thin skinned vehicles and bait for ATGM.

They are there in accordance with Astana agreement. SAA will not attack them but will give them a free pass to the north.

Yes, that is what is expected, but it also depends on Turkey reaction.

True, even though some folks here are blinded by their hatred. Luckily SAA is not led by fools, and will not risk loosing Russias support by stupid actions like those Mr. Zionism above wants them to do.

Russia is the best ally of Zionists, even when they kill Russians Putin kisses arse.

Well, i said this myself again and again, until some folks here screamed to scensor me. So better watch your back, truth hurts some here it seems. Still, SAA is in no position to anger Russia. Assad relationship with Putin is already in deep shit, after the downing of the Russian plane in the Israeli attack, and Russia already floated the idea to prop up some “Alternative” to Assad. SAA needs to focus, and nothing will be gained if they attack the observation post. This would only force Russia to put an end to their support of the Idlib op. And at the moment, all is looking good. Erdogan will loose Idlib, and his deal with the US will go nowhere he wants, US is only buying time. So Erdogan has played out anyway, eventhough this charade will go on some years. But a cool head is needed. Even though i understand the anger for the Turks very, very well..

Have you noticed that the shape of the top left advance in the video looks like a Russian Bear devouring Khan Shaykhun :)