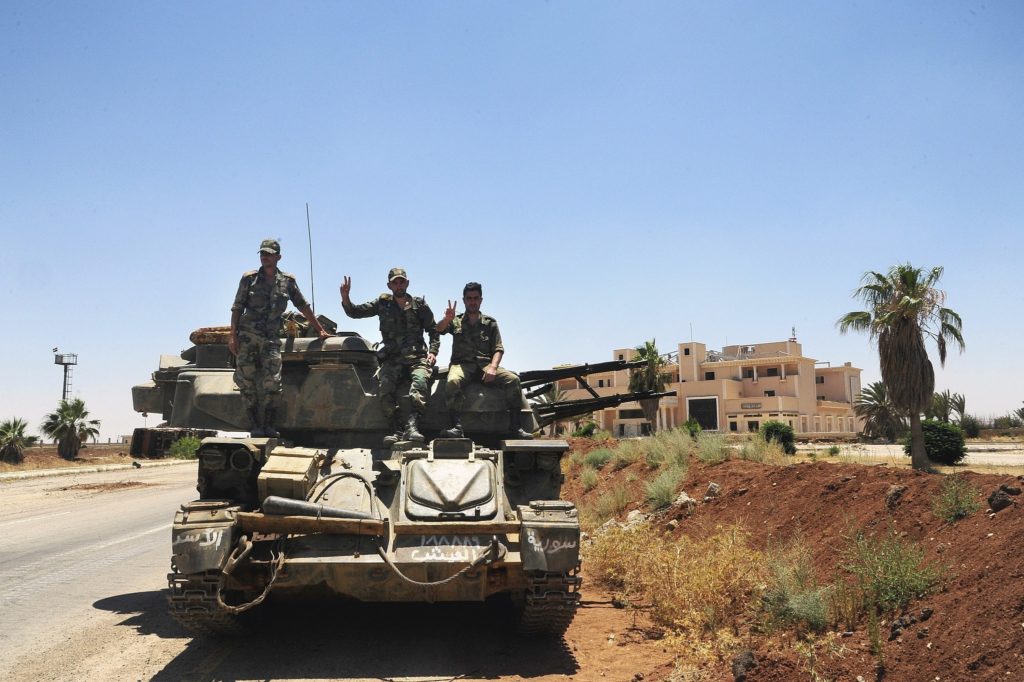 On July 19, units of the Syrian Arab Army (SAA) entered the town of al-Shaikh Sa’d and the areas of Tell al-Bahsa, Tell Ashtara and Khirbat al-Tira in the western Daraa countryside, according to the Hezbollah media wing in Syria.

In the northwestern Daraa countryside, the SAA entered the key hill of al-Jabiyah and the villages of al-Sukariyah and Qrqus, northwest of the town of Nawa. 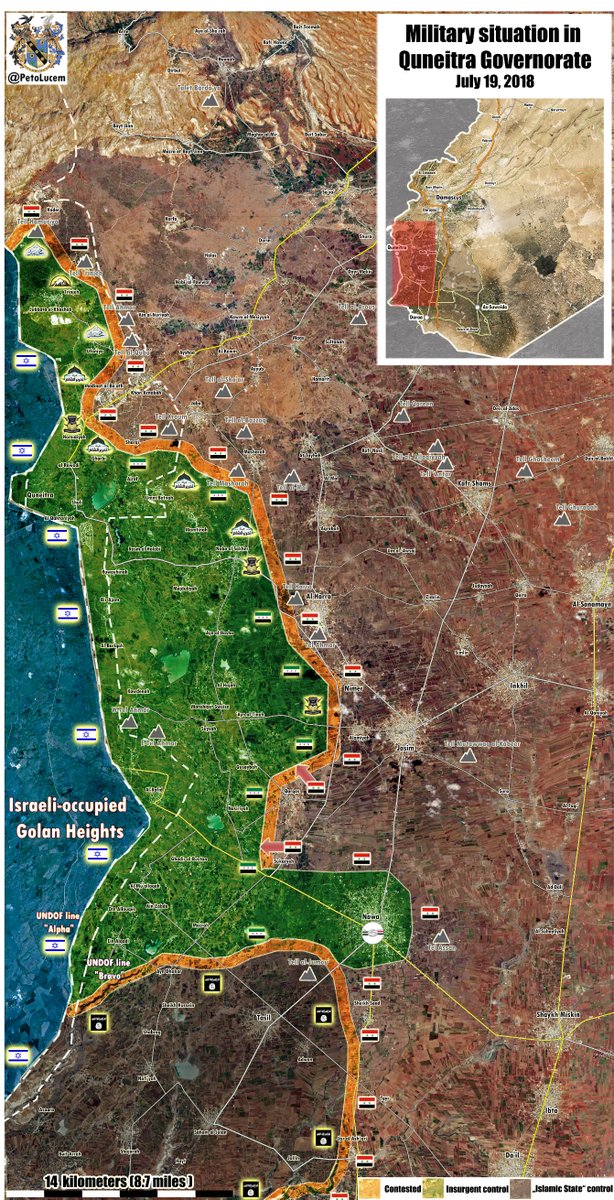 The deployment of the SAA in these areas is a part of the ongoing reconciliation process in western Daraa, which began earlier this month. These areas overlook the pocket of the ISIS-affiliated group Khalid ibn al-Walid Army.

A source in the SAA told SouthFront that the SAA is currently coordinating with the Free Syrian Army (FSA) to prevent the ISIS-affiliated group from expanding during the reconciliation process.

According to Syrian pro-government activists, the SAA and former fighters of the FSA, backed by the Russian Aerospace Forces, will launch a join operation against the Khalid ibn al-Walid Army once the reconciliation process is over.

What would be next for SAA. Does not looks like Idlib will be next, as the evacuation over 7000 from two towns may suggest that SAA will not fight for Idlib

Civilians were evacuated as well as a prisoner exchange taking place. The Syrian defense forces who have held off numerous attacks against the two towns remain in place. As Assad has asserted publicly all Syrian Proper, Commons and Treasure will be retaken and Administered by the Syrian government.

Joe, keep dreaming. I loved that “may suggest”, it remind me an “very likely”.

As Syria will very soon liberate Daraa (reconciliation for Quinetra will begin tomorrow as per agreed Yesterday), the Syrian army will most likely perform massive security operations throughout Syria which will take up to 2-5 Weeks. They will take out sleeper cells and tiny pockets of Isis and jihadis. Meanwhile, they will pressure Turkey to remove HTS in Idlib in order to restore power to other factions that are a bit more moderate but still jihadis. These jihadis will then reconcile with the government and an election will be held in Syria.

This is the most likely outcome, if HTS refuses to dissolve, the SAA will launch an offensive, alongside rebels to destroy HTS in Idlib. I doubt that Assad will allow HTS to control Idlib in a autonomous ruler ship because Idlib is most likely one of the largest and most important provinces for trade and routes.

It would be better if Al Tanaf is taken first, to have full control of the south borders.

If Erdogan don’t like PKK and SDF then stops these supply routes to PKK and SDF then just with in two months entire occupied Syria can be liberated from US and NATO forces. Blockade them as they have blockade Palestinians and have butchered millions of civilians.

In alliance with US Pakistan has lost 75,000 innocent civilians and US$120 Billions. Obama had wanted to invade Pakistan but China and Russia saved them…….

I find it quite interesting that the FSA will join the SAA in expelling ISIS and we could have anticipated this development.

Let us revisit the wording of the US statement released just before Syria is about to launch their much anticipated offensive in Southern Syria. We focused on the part of the statement that threw the FSA under the bus – do not expect help from the US. And indeed, the US has stayed out of the conflict representing a pleasant change in US military doctrine in Syria – although it remains to be seen how the US will respond in Eastern Syria.

Of interest is what else was said in the statement which included something to the effect – make arrangements in your own best interests. This is significant because it releases the FSA to make arrangements to suit themselves, not the US. Trump I am sure understood the implications – the FSA will throw their lot in with the winning side which is clearly Assad and his allies. The added bonus is the FSA, former proxies of the US will now fight alongside the SAA to wipe out Israel’s favoured headchoppers.

I can only imagine the temper tantrum being let loose by NetanYahoo as he realizes Trump planned all along to abandon the FSA and de facto encourage them to make nice with Damascus. This was without a doubt discussed between Putin and Trump well before,the Summit – given deployment of Russian military police in Southern Syria, the two leaders will not want US and Russia Asian forces to get not a fight. The summit I think focused on Eastern Syria and Turkey. My gut tells me they have worked something out and I assume acceptable to Assad.