On June 23, the Syrian Arab Army (SAA) and the Tiger Forces backed by Russian Aerospace Forces launched their ground attack on the region of Lajat between the northwestern al-Suwayda countryside and the northeastern Daraa countryside.

According to the Hezbollah media wing in Syria, the SAA and its allies captured the villages of Madura, Alali, Barghshah and al-Shiyahat in Lajat after heavy clashes with the US-backed Free Syrian Army (FSA).

Syrian pro-government sources reported that the Russian Aerospace Forces and the Syrian Arab Air Force (SyAAF) backed the SAA attack and carried out a series of airstrikes on several positions, ammo depots and vehicles of the FSA in Lajat.

From its side, the FSA operations room in southern Syria known as “Tawhid al-Sufuf” claimed that the FSA artillery shelled several positions of the SAA in the eastern Daraa countryside. The shelling reportedly killed five Syrian soldiers and destroyed an artillery piece of the SAA.

The SAA and its allies will likely capture more villages in Lajat in the upcoming hours, as the FSA appears to be unable to defend its remaining positions there.

Syrians and their allies are crumbling the US plots of expansion in Syria and in surrounding countries.

The head-chopper family and friends stampede out of Syria begins. To prevent the refugee invasion and fall of the Jordanian monarchy, the US/Israel/Saudis will have to go full-retard and invade Syria. The Russians, SAA and allies already know this and undoubtedly have something planned. Something that will undoubtedly foil the US/Israeli/Saudi scheme and embarrass them for the arrogant fools they are. Keep in mind how ‘successful’ my country is about sealing our borders. 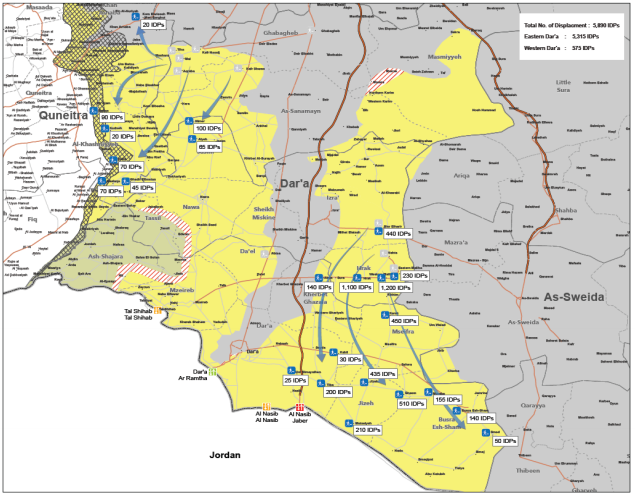 If the SAA moves fast enough those head-choppers won’t have time to chop.

South Front’s optimistic assessment of capturing the area in hours is far to optimistic. It is more likely that tomorrow we’ll read the same headline, prehaps even in two weeks we’ll go through the same drama over again.

Why do you misquote the article?
“The SAA and its allies will likely capture more VILLAGES in Lajat in the upcoming hours,”

Semantics, we can argue about what SF meant to say. Prehaps you’re right, but I stand by my opinion that SF is being to optimistic.

Well, it seems that what really ended up happening is that a bit over 24 hours later the Rebel militia switched sides and became a government militia. And we can all firmly say that was no one’s first guess.