The Syrian military has deployed at least one Russian TOS-1 heavy flamethrower system in order to strengthen the defense of the government-held city of Aleppo, according to pro-government sources.

If this is true, the military is actively preparing for possible major attack of Hayat Tahrir al-Sham (formerly Jabhat al-Nusra, the Syrian branch of al-Qaeda) and its allies from the so-called moderate opposition.

The Syrian Arab Army (SAA) is now deeply invoved in a large-scale anti-ISIS operation in central Syria. The goal of the operation is to lift the ISIS siege from the city of Deir Ezzor.

Hayat Tahrir al-Sham may use this for launching an attack against government forces at some front in the province of Aleppo or Hama. 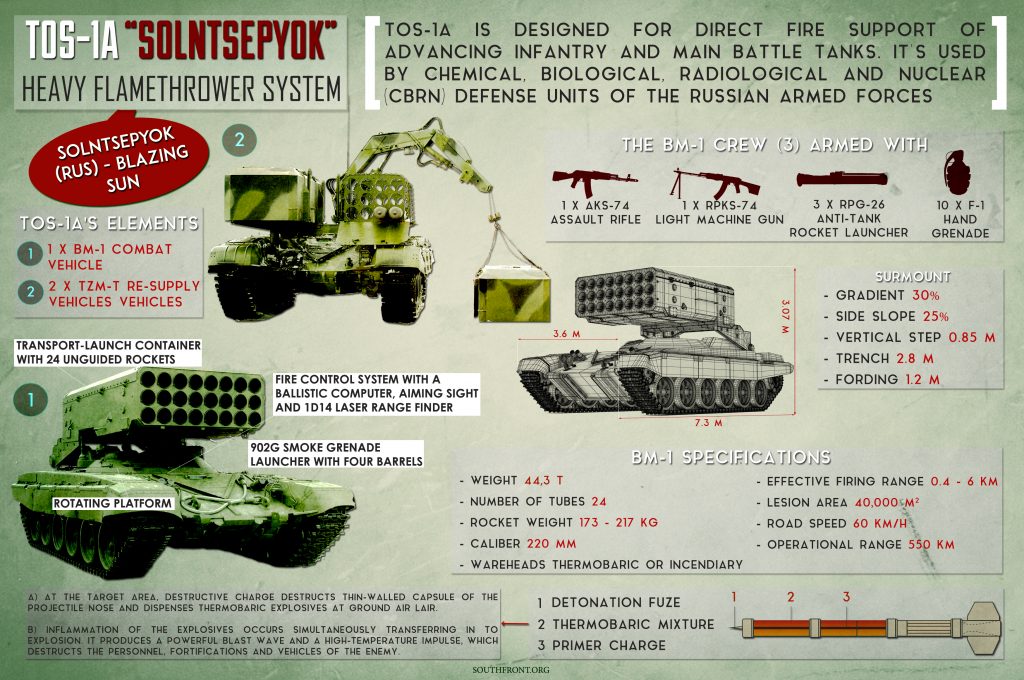 The updated TOS-1 mobile artillery with accurate extended range missiles has given the SAA a capability it was previously lacking. They had a powerful impact on the war, another 4 batteries would be devastating.

SAA, you are such a dedicated/daring/durable army! We applaud your tenacity/your courage/your steadfastness and your doggedness as, you approach Deir Ezzor; Exterminate those pro Wahabhist/pro Israhelli and pro USA capitalists rats! Great news and good luck with your biggest offensive against terrorists.! Careful with the Bobby Traps and trip wires as you enter the city.

And do not forget to eat well.

Always eat well. Never turn down a chance to have a chow, piss, or grab some zzzz’s. ;)

The victorious SAA will emerge from this conflict as the most capable and battle tested military in the Arab world, bar Hezbollah, and woe to any of its enemies that underestimates the Syrian Arab Army.

very nice, i hope they absolutely incinerate many many daesh and HTS rats :)))

They will probably need to do more than a few launchers and be ready at a moment’s notice. Given both ‘The Sham’ and Daesh share the same owners, they have demonstrated before their ability to coordinate while on the surface appear to be enemies.

Also remember it was mostly them and other similar proxies, less of Daesh, who made Aleppo a long battle and at times forced the SAA to withdraw from places like the artillery college and that 4-digit numbered apartment complex on the south side of Aleppo.

Also Idlib is a different ball game because of the mountainous terrain. This war is far from over although its showing some decent progress after about a year of back and forth as a result of dumb ceasefire deals that only favored the terrorists regrouping and rearming.

Don’t worry, those that don’t like it are coming to France and you will have a great time together, even better than now!

He means another bad-ass piece of military hardware to protect the innocent from Al-Qaeda. Excuse Lumen’s mistake. He’s new around here ; )

Lumen gets his news from CNN.