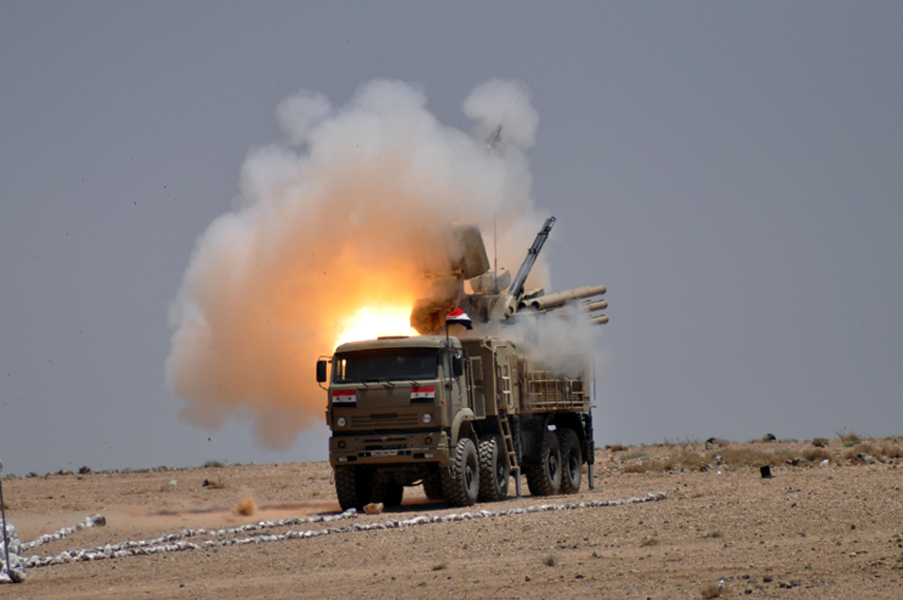 The Syrian military has deployed new air defense systems and anti-aircraft missiles to cover frontlines in the provinces of Aleppo and Idlib, Reuters reported on February 5 citing “a commander in the military alliance fighting in support of President Bashar al-Assad“.

“They cover the air space of the Syrian north,” the commander told Reuters, describing the deployment as a “message to everyone”. The air defences had been sent to frontlines with militants in rural areas of Aleppo and Idlib.

Turkish warplanes have been mounting air strikes against the northwestern Syrian Kurdish region of Afrin, which is part of Aleppo province, as part of a major offensive targeting Syrian Kurdish YPG fighters.

The decision to increase air-defense capabilities in the area follows the increased tensions between the Turkish Armed Forces and the Syrian Arab Army in southern Aleppo.

This may also limit the ability of the Turkish Air Force (TAF) to conduct airstrikes on positions of YPG fighters in the Afrin region. The TAF had already decreased its air campaign in the area, allegedly under Moscow’s pressure after the incident with the Russian Su-25 warplane in the province of Idlib. MORE DETAILS

if the system is like the one on the photo…..if its deployed correctly it can be a nightmare for Turkish pilots..especially the Atak helis will have all warning sighs on if the approach ….

I am sure that Russian guidance will ensure the most effective deployment of these integrated systems :)

The air defence systems are for the Yankees.. Syria Russia turkey and Iran are playing the same game as Yankees create havoc in that area that will spread to Yankees illigal bases.. that will chased them away.. Guess that’s the only way to kick them yankess and not starting ww3 with psychopaths..!

Russia and Turkey are same shits with their authoritarian sibling regimes ! No difference between Putin and Erdogan, that’s why they became allies last years…

Why then is Bulgaria the prime supplier of ammunition for the Turkish backed terrorists ?

What medications are you on?because you need to change them, as you are hallucinating ,,where is jewSA on your list,,the main isis supplier and supporter?along with ISRAHEL.by the way,whats the weather like in occupied PALESTINE?

Oh…you are just another pseudo-antisemitic brainwashed kid. USA is in the list as you see, fagot! But main suppliers are China and Russia, so eat your shits. And your beloved Putin is also a jew puppet controlled by Rotschild bankers! Hahaha. :)

Your list shows the makers of the weapons. Wonderful. But everyone knows the Zionist NATO lapdogs of eastern Europe are the supply routes…and who are they? The fact that this list does not contain ISrael or KSA or any of the other Arab conspirators just means this list has nothing to do with WHO is supplying these weapons. But, as this is your day job, you know all that. Your attempt to pass this off as anything but a diversion is a FAIL. Just another paid-for agent to block.

Wrong. I answered to Florian Geyer who insulted Bulgaria claiming that Bulgaria support ISIS and other islamists, which is total bullshit. And Bulgaria is not a zionist lapdog, so don’t insult bulgarian people, you piece of shit and zionist puppet !

Is Bulgaria part of NATO? Are there not US troops stationed in Bulgaria? Since both NATO and the US (which are Zionist to the core) support ISIS and other terror groups, then Bulgaria does indeed support terrorism. Where are the old soviet style weapons coming from? The moon? Who is inviting NATO into the Black Sea? Where do those morons think that is going to lead? Have your leaders made it plain to you that there is now a very big fat X over Bulgaria? Wait until all the western bills (IMF) come due, then you’ll finally realize how fucked you are, but it will be too late by then, hell, it’s probably already too late. At least the Romanians let their government know how they felt about NATO being there. Bulgarians? Apparently still believing the fairy tale that they are still a sovereign state.

Blah, blah, blah…you are just anti-bulgarian biased worm. So stop with your lies about my beautiful country. We are not warmongers and not supply islamists or other terrorists! End of discussion !

You may like to read this then Bulgarian God.

It’s a 100% lie. Bulgaria don’t support ISIS or other islamists, so shut the fuck up you antibulgarian worm !

So you claim Bulgaria is shipping in Chinese made weapons to the Jihadist as a middle man only ?

The ammunition that Bulgaria sells to the Saudis is for Old Soviet Russian equipment that has been directed by various routes to Terrorists in Syria by old Warsaw Pact countries and by the CIA from the vast stocks in Libya. The Saudis have NO such equipment and therefore NO need for ammunition for such equipment.

Bulgaria had a long tradition of ammunition manufacture for Soviet forces and those factories have the tooling and blueprints necessary for manufacture today.

Obfuscate as much as you like but the arms trail still leads back to Bulgaria ,Bulgarian God.

Glad you posted this version of ‘circular logic’. At least now we know what we’re dealing with…not much.

It appears that truth is rather uncomfortable for you Bulgarian God. That s ok as your post shows a typical response form shills such as you.

Bad language is always the signature of you and your fellow travellers. :)

Blah, blah, blah…you are just a liar, and english is not my native language.

Do please carry on Bulgarian God. You may enjoy this . I know I did.

The way you attempt to twist reality suggests that you might be a Lawyer but not a very good one Bulgarian God.

To the disdain of america, much of the world uses Russian made weapons, both Soviet and post Soviet . Many of which in recent years have been procured and sold by countries like Bulgaria to arm the US Coalition of Terror and her proxies. Primarily because they work efficiently in situations where logistics and repair are not suitable to support the over complicated US weapons.

You shut up, too! Read the Balcan Group documents. Bulgaria is also a big supporter of syrian opposition. And your beloved bulgarians … thiefs, corrupted, maffia friendly people. In USA finished to accept diplomas of bulgarian universities because of big corruption and sold titles. You will never enter Schengen, you belong in Lesotho not in Europe.

Yeah and wait til you get the bill. You’ll be as happy as the Greeks. Fool.

We are core EU. And Bulgaria will not long member state. Corrupt country, back to Turkey!

Russia is much bigger supporter of ISIS. They sent directly 5 000+ jihadists.

It would be prudent for you to cease your infantile comments here until after you grow up Velociraptor.

You just have to quit reading your government propaganda…it’s making you unbalanced.

Do you even read the baloney you post? You embarrass yourself and your countrymen.