The Syrian military is deploying hundreds of troops with battle tank, armoured vehicles and artillery pieces to the town of Saba’a Biyar in southern Syria as a preparation for an expected push of the government forces to the borders with Syria and Iraq, according to local sources and pro-militant media outlets.

Saba’a Biyar is located near the Damascus-Baghdad highway and will likely become a foothold for government troops advancing to the al-Tanaf border crossing area that should allow them to link with Iraqi forces combating ISIS in the Iraqi territory. Earlier this month, the Iraqi Popular Mobilization Units (PMU) military leadership announced that the Syrian-Iraqi border is a strategic target of PMU operations against ISIS.

Maybe it will be demarcation line like in case with Al Bab. 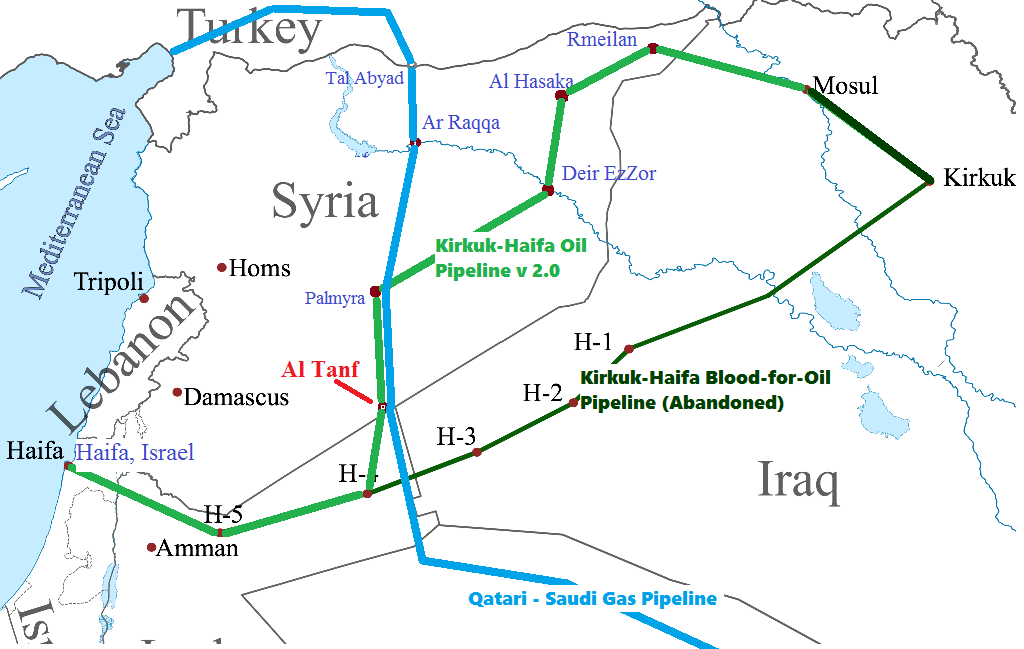 very interesting. I think that the Kirkuk-Haifa oil pipeline would really irritate both Sunnis and Shiites and bring even more caos to middle east. The creation of a Israel/Kurds allience would break both Sunni (Turkey-S.A.) and Shiite (Hezbollah-Syria-Iraq-Teera) axis at same time.

There’s nothing in that desert worth fighting over for the time being. In all likelihood, the SAA build-up is for clearing out ISIS from the region SW and south of Palmyra then on to the T3 airbase where they can head north to threaten ISIS at Arak and al-Sukhnuh.
The US sent in units of the new FSA to prevent ISIS from using the desert roads for escaping to the west so should be withdrawing them back towards al-Tanf now that the SAA has reached the highways’ crossroad. The US/new FSA will hold their positions along the border and around the T2 pumping station & airbase since that blocks all ISIS traffic from the east, south and north from accessing the highway to Palmyra and Iraq. The SAA reinforcements sent to Deir Azzor probably will be used to secure the N-S roads west of the city, which will cut off ISIS units in the west and north from reaching Mayadin. Then the SAA can busy themselves wiping out the remaining ISIS units in the west and along the river as long as things remain relatively quiet in the west (other than the Islamist extremists killing each other).
The T2 highway runs along a pipeline that brings lighter Iraqi crude north to the T3 pumping station. Syria uses that to mix with the very heavy sour crude that’s produced at the Deir Azzor fields so it’s easier to pump to the coast for export. ISIS still controls land inside Iraq that the pipeline runs thru so it probably needs repairs since ISIS tapped into all known pipelines to get at the trapped oil. The EU has oil export sanctions on Syria plus ISIS has screwed up the fields before they withdrew so the Syrian government isn’t going to be in a rush to run off the US/FSA from the T2 area and along the border. I’m sure the US/FSA will clear out when they’re no longer needed down there. 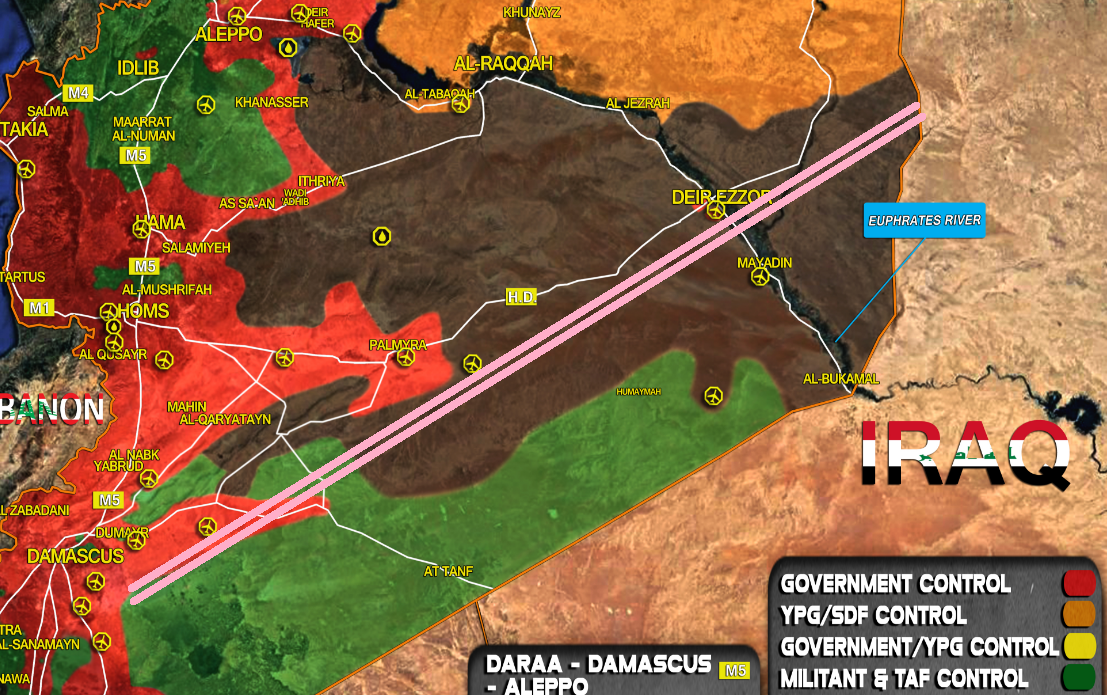 thats why the Russians are pushing Assad to move in direction of Deir Ezzor. I’m afraid that’s too much for SAA and Assad knows that.

“The Syrian military is deploying hundreds of troops with battle tank, armoured vehicles and artillery pieces to the town of Saba’a Biyar in southern Syria as a preparation for an expected push of the government forces to the borders with Syria and Iraq, according to local sources and pro-militant media outlets.”

What i see, is that Americans will never allow the Syrian and Iraqi army come close to their borders, it seems to me that they are planing to create a Sunni zone in the area of Deir ezzor, so we will have three states, one secular with Alawites and the others, one for the Kurd’s with great independence as the Iraqi Kurds and finally a state for the more fanatic religious Sunni population, lets be realistic the Syrian army does not has the manpower and force to advance in this area, i hope it had it, but the reality is different.

Deir ez Zor is mostly controled by SAA and only place what southern rebels could take is desert which cant be state, posibility of new state is only in northern Syria and Iraq(Kurdistan) but question how will Turks react to that

Turks will react with brutal violence as they always do, and as they do today to the Kurds, my grandfather was the only child of the family of many, that made it to reach alive Greece from Turkey, after the Greek-Turkish war of 1919, and the Armenian-Pontiac genocide, as for Deir ezzor, it looks for the Americans like an isolated place with a relatively small guard heroic but small of 4000? men, that they could possibly take and claim a land around it, not for security of people as they always claim, but for the reason to divide Syria, i hope aim so wrong, believe me, but i cant trust Anglo-Americans, you know what happened in Cyprus to, i guess, divide and conquer.

Why wouldn’t SAA fight any unwanted occupiers on their own land? Why would they be afraid to fight for their land – because a criminal country like USA is meddling?

Criminals they are, as you say, sneaky, cunning and treacherous they are and that makes them very dangerous, the SAA has every right and for sure they are not afraid, what i mention is that they are tired and for sure have a lack of manpower in an overstretched territory, lets be honest, such people as the Anglo-Saxons, are capable for the worst, just a note.

Russia would be crazy not to send in the Air Force and take them out .
Russia has attacked them last time they crossed at Al Tanf .

Just when was that? The US/new FSA has been camped out at al-Tanf and the border crossing for over a year.

The FSA have been camped out , “in training” , but , on the Jordanian side of the border , at Al Tanf .
Today there are reports that they have crossed the border will a column of tanks ( unknown number ) , and headed north-east to Humamah .
When the USAF bombed the mountain overlooking the airport at Deir Ezzor ,killing 80 and wounding 100 Syrian and Russian troops , ISIS launched an offensive and took the mountain .( Oct 2016 ) Shortly after that FSA crossed at Al Tanf , and were bombed by the Russian and Syrian Air Forces , until they pulled back across the border. That is what I refer to above .
There are also reports that the USAF has bombed Al Buramal , (of course under the pretext of attacking ISIS) . Mayadin , the “new capitol” of ISIS , naturally would be the next objective . These two moves suggest the push to Deir Ezzor and the oil fields is on . The creation of a new ” Sunnistan” is the objective .