On August 25, the Syrian Arab Army (SAA) captured several positions in the areas of Qubr al-Sheikh Hassan, Umm Mrazkh and Tell Ghanim north of the governorate of al-Suwayda, according to the Syrian Arab News Agency (SANA).

The Syria-based al-Suwyada-24 blog said that the SAA killed more than 30 terrorists and captured one during its advance. Furthermore, the SAA destroyed two ISIS vehicles in Tell Ghanim. In the course of the clashes, ISIS fighters ambushed a large unit of the SAA in the heavily fortified area of al-Safa. According to the Syrian Observatory for Human Rights (SOHR), 8 Syrian soldiers were killed and more than 60 others were injured in the ambush.

The SAA is advancing slowly inside ISIS’ pocket north of al-Suwayda in order to insure safety of about 30 civilian hostages, who were abducted by the terrorist group earlier this month.

how the hell are these daeshbags launching counterattacks??? they are surrounded, supplies decreasing everyday, wtf is going on? nevertheless GREAT WORK SAA!!

I would not always trust an SOHR report.
Off topic: Our new QC manager at work does not seem to be working out and missed most of last week, I think he left for another job. Anyways he did not seem to learn much in school we just paid to send him to. So the VP brought in our IT guy to help out, he seems very sharp. Below is a cool file photo of the machine. I write the programs and will teach him to operate our new Romer Arm CMM. It’s very challenging for me also! :)) 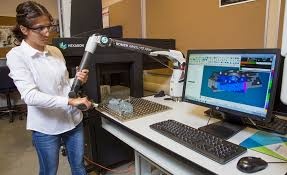 Nice! What do you do? Hire me? Hehe

Was hoping to hire the girl pictured above to help me out. :)))
I am lead inspector in sheet metal fab, it turns out I was training my new boss!
Doubt he will be in Monday, and our VP will be soooooo pissed off, since he hired this idiot and had high hopes.
Our setup is nicer than pictured. Larger arm with magnetic base. Moves around on a large steel welding surface plate. The laptop can be hooked up to 90 inch screen behind work station in “my” QC lab. :DDD

Religious fanaticism combined with the knowledge that there is no retreat for them is my assumption. Either they die fighting (and get virgins) or they will rot away in a Syrian prison for the rest of their miserable lives.

but where they getting the ammo and supplies from?