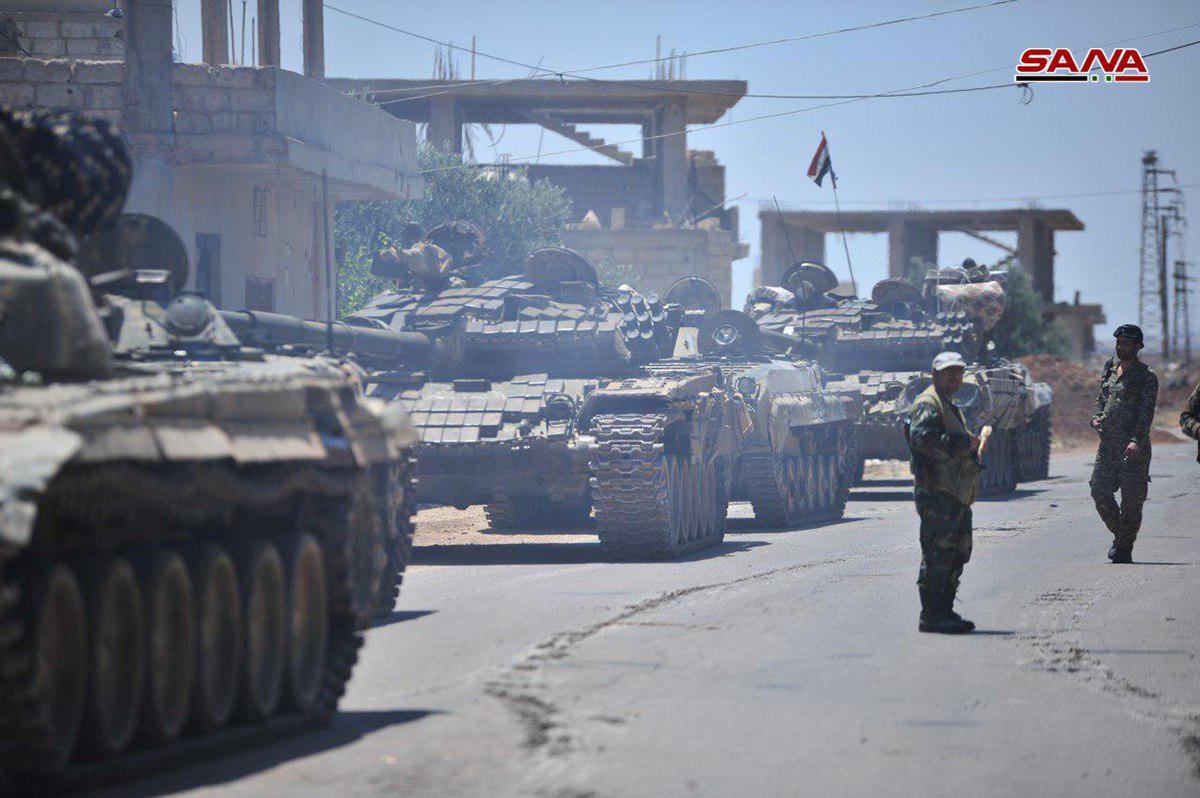 On June 30, the Syrian Arab Army (SAA) Republican Guard, backed by the Russian Aerospace Forces, captured the areas of Khirbat Jillah and Tell Samn in the framework of its military operation in the western Daraa countryside, according to the Hezbollah media wing in Syria.

The SAA imposed its control of Sad Ibta, Tell Hamad and the 271st Brigade, northeast of Khirbat Jillah, a day earlier after heavy clashes with the US-backed Free Syrian Army (FSA).

In a related development, the Syrian Arab News Agency (SANA) reported that the towns of Tafas and Muzayrib have reached a reconciliation agreement with the Damascus government. Units of the SAA and the Russian Military Police may enter the two towns in the upcoming hours, in a similar way to what happened in the towns of Ibta and Da’il earlier.

The western Daraa countryside will likely witness a furious battle in the upcoming weeks, if the remaning groups of the FSA refused to surrender and accept an evacuation agreement.

No ‘reconciliation agreements’ …exterminate the vermin and prevent any potential Zionist Fifth Columnists.

AGREE. All the Worlds VERMIN must be exterminated. Starting with the occupiers of Palestine.

Soon motorway will be opened between Damascus and Amman.

Just hate these typos, although, this is much more than a typo. SF really need someone to proof read their statements like the one above, which should read….”The western Daraa countryside will likely witness a massive burial detail of FSA Rats should they refuse to accept the stay of execution which they are being offered along with a trip on a green bus to Idlib where they might prefer to be roasted on their way to Hell.” Now that is what you call factually correct.

The clarity of Truth !!

Lots of good news for SAA in Syria recently, it seems like good work. AMN also noted continued RuAF activity as being heavy…as to the withdrawal…I suppose it was a rotation.

Well the pilots where doing 100 airstrikes on average a day on ISIS targets alone with that force and it brought ISIS to it’s kness, so it isn’t that surprising.

There is a wealth of difference in the words ‘ Capturing and Liberating ‘.

It’s all in the words, my friend. How you phrase an article or headline tells you a great deal about how and what bias the author has.

Most of them will swear feudal allegiance soon, but like everywhere else low level fighting and rampant gang activity will persist indefinitely.

Bitch and whine all day long – but it won’t stop the SAA liberating southern Syria.

It was the US and its allies who poured oil on this fire turning it into a massive war. Billions of US taxpayer’s money went in shipping weapons from Eastern Europe to the various Jihadi brigades, fueling this war for years on end. All the Russians and the SAA did was clean up the mess that the US and its allies created.

Playing the victim card, typical russki and Assadist propaganda. It was not US who killed Syrians that sparked a civil war. It wasn’t USA who bombed every home in Syria.

Nobody bombed every home in Syria. Listen to yourself, you are psychotic. Your blind hatred for all things Russian has turned your brain to mush.

Calling me a psycho is not an argument. I hate the Russki govt not the people.

And yes facts are facts, russki and Assadist bomb homes and displaced millions

You know that it is your masters who’s responsible and we know it too.

What a low IQ response to the facts

Your facts are a heap of bollocks.

The Syrian state’s rapid liberation of the militant occupied southern territories is all happening, and neither US or Israel will stop it, so you best get used to it Joel.

It was America together with the Saudi Wahhabi Head-Choppers & Israeli Mossad with BiBi that infiltrated Southern Syria in the region surrounding Daraa throughout and from 2010 onwards following on the template drawn up between the CIA, State Department and US Defense Department during the Presidency of Dubya. Qatar and UAE and Saudis were happy to finance this entire Syrian nightmare and Hilary Clinton was stupid enough to believe what she was told by the Israelis, Saudis and CIA/State while suffering and continuing to suffer from a predilection and preference for BiBi-Wahhabi-Bullshit. What a surprise it was for all of them when neither the majority of Syrians nor the Syrian Defense Forces (a 65%-70% Sunny Force) nor al Assad were prepared to bend and subject their Country to fragmentation and unprecedented destruction simply to condemn the Syrian People to generation upon generation of conflict, war, human suffering and destruction of Syria’s Ancient Culture. Anyone who is stupid enough to have believed and to continue to believe the fairy-tales constructed by the CIA and Mossad about the Syrian People ‘rising-up’ for purposes of overthrowing the “despotic Government of Assad” is either so stupid as to warrant no attention being paid to them or so truly and empirically evil that I truly hope they rot in Hell in this life and in any future life they may believe in.

Our Media in “the West” has disgraced itself throughout the entire of the Syrian War and Media outlets, Reporters, Commentators and those who pretend to be Journalists continue to disgrace themselves as late as tonight (Sunday July 1) with their coverage of the “stricken people” gathering on the (closed and I hope, permanently closed & sealed) Border with Jordan: I wonder whether it might ever occur to those reporting on the people gathered at the Jordanian Border to ask a few questions of the very many young men “fleeing the War” what they have been engaged in throughout the past 6 – 8 years and to establish their Nationalities and the purpose of their presence in Syria when their homes are on the Arabian Peninsula. I don’t suppose any American, British, French or mainstream English language media people will ever have the good grace to apologize for their truly disgraceful spinning of the story of the Syrian War: at least, with Saudi, Emirati, Israeli & Qatari media outlets, they were honest enough to crow at the crumbling of the Syrian State, the disintegration of Syrian Society and almost to welcome the rise of ISIS/Daesh/al Nusra/al Qaeda and their creation of a suitably savage counter-weight to the Syrian State.

Unfortunately for all of these spinners of falsehoods, there is no happy ending whereby “good” American, British, French and Saudi Armed Forces break the power of their creation (ISIS/Daesh) and replace their Salafist State with a suitably constructed pro-American, pro-Israeli, pro-Saudi Sunny Arab State in South, Central and Western Syria and separately, a Kurdish vassal State in Eastern and Northern Syria.

The Clowns in the American State Department, Department of Defense & CIA together with the Clowns in British and French State & Military/Defense “Intelligence” need to be removed from their Posts and/or if already departed to fill some well-padded and highly remunerated posts in the Military/Defense shadow States and Media, removed from their true homes and all, together, imprisoned for the whole of their natural life in Prison Camps lying at the heart of the Syrian Desert. Their Political Masters and Mistresses should be hanged.

Are you blaming the Media for bombing Syria? LOL Seriously take your conspiracy theory bullshit elsewhere

Did I say that? Really? Can you read?

Your whole compression of the War started with “It was America…”

My whole “compression” of the War?? “compression” ? Really Joe? I comprehend a little difficulty in thought and understanding here somehow:) ))))

Congratulations to the glorious SAA. Soon, to remove the VERMIN from the Golan ! After retaking Golan from the FILTH, Northward to ‘remove’ the Paper-Tiger forces in the East.