On June 28, the Syrian Arab Army (SAA) and the Tiger Forces, backed by the Russian Aerospace Forces, captured the key town of al-Harak in the eastern Daraa countryside following heavy clashes with the US-backed Free Syrian Army (FSA), according to the Hezbollah media wing in Syria.

Syrian pro-government sources also reported that the SAA captured the villages of al-Surah and Alma along with the 49th Air Defense Brigade, west of al-Harak. 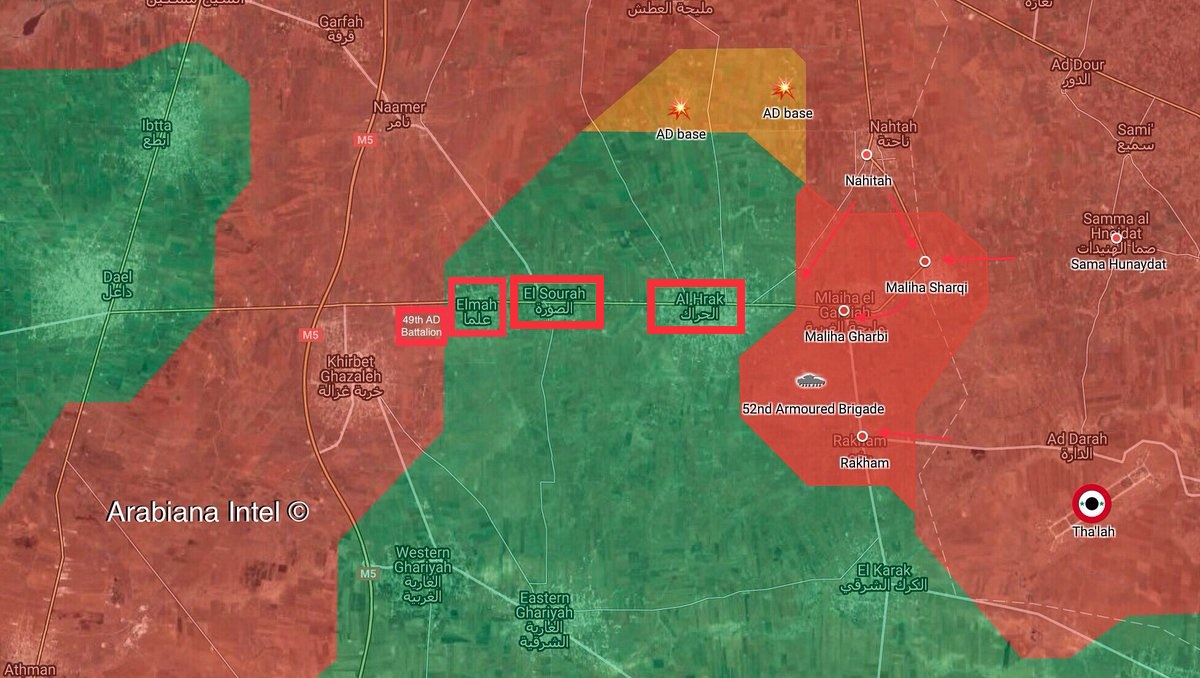 Furthermore, the SAA launched a new ground attack on the FSA positions near the administrative border between the governorates of Daraa and al-Suwayda. According to the Syrian Arab News Agency (SANA), the SAA managed to cut off the road between the towns of Umm Walad and Jubayb after capturing the hill of Sokar.

This advance will likely force the FSA to withdraw from the towns of Kanakir, al-Aslihah and Umm Walad, as they are about to be besieged by the SAA. US-backed fighters used to shell the city of al-Suwayda from these villages, according to Syrian pro-government activists.

The next target of the SAA and its allies is the town of al-Karak between al-Harak and Umm Walad. The FSA will likely fail to defend the town, which is already surrounded by the SAA from two sides.

Videos of the SAA operations in Daraa:

Things are going well. It doesn’t look like support from Jordan and Israel is helping their terrorists much. And they’re probably not going to allow them to cross the borders. So it’s green bus tickets, capture, injury or death. Which is why a lot of them are choosing not to fight. And to get out on favorable terms while they can.

Some of the ‘refugees’ mentioned by Casey’s cited article in Haaretz are maybe also IDF?

It wasn’t that long ago when having Syria cleared of non state occupying terrorists seemed far away. But it’s rapidly approaching with the desert pocket west of Dier Ezzor close to collapse. And the SW area being cleaned out now. At the rate that things are going, by the end of July both of those areas will be clear or close to it. And only Idlib will be left. The eastern part of Idlib fell quickly in the spring. The west probably won’t hold out long with the bulk of the Syrian government coalition available to clear it.

Once that’s done it’s on to the final phase of the war with only Turkish and US occupied areas to recover, not counting the Golan. There are plans and preparations in place to recover the Turkish and US/NATO occupied areas. It will be interesting to see how the war’s conclusion plays out.

Congratulations SAA and company on all that you’ve accomplished so far!

They captured these areas hours ago as they employed SAA common attack to flank 3 sides after retaking many military bases and a ceasefire went into effect for 12 hours after midnoght to negotiate terms of surrender elsewhere.

Just Published in Jerusalem: This is the SHXT that is being published in Haaretz of Jerusalem about what is happening in S Syria. It is a pure lie to say there are 50,000 Refugees fleeing the fighting. The people fleeing are ISIS al Qaeda al Nusra and all the other al Sham’s and al Shits and, of course they are fleeing towards their protectors in Jordan, in Jerusalem and in Washington & Riyadh. Chickens coming home to roost!! Haaretz is regarded as being a reasonably truthful Jewish newspaper so imagine what is being published in all other Jerusalem Newspapers!! https://www.haaretz.com/middle-east-news/syria/50-000-syrians-flee-fighting-amassing-on-jordan-s-border-1.6221074?utm_source=Push_Notification&utm_medium=web_push&utm_campaign=General

They have to explain somehow the 50,000 fleeing troops.

They have just negotiated with Al Karak as all the rebels and HTS/ISIS have retreated according to local admin in the town Nassib is still in reconciliation talks.

What exactly are you questioning here? The actual numbers or the fact that there are a lot of refugees fleeing? Of course most of these are families of al Nusra militants, but the militants themselves are not fleeing with them. The militants hang around long enough to be showered by RuAF bombs and SAA artillery, then they flee.

There is supposedly 3,000+ but it always sounds better to use a larger number mostly ISIS/FSA/HTS families.

The closed Jordanian border puts me in mind of the North Vietnamese Spring Offensive of 1975. Roads choked by refugees hindered movements of South Vietnamese troops ultimately resulting in the Fall of Saigon and the end of the Vietnam War! Of course FUKUS (France UK US) and SHIT (Saudis Hashemites Israel Turks) will scream about their puppet mercenary Orcs getting killed, but they do that anyway.

Good enough for the bastards in the puppet mercenary forces on the ground some of which (in the FSA) appear to be simply holding towns until such time as SAA is close to the walls for purposes of misleading their puppet-masters and ensuring they are not reinforced by believing Hashemites/Wahhabists/Salafists and then, just as soon as it is safe to do so and to prevent attack from behind by their own former ‘comrades’ they are surrendering. I may be wrong but the speed at which Towns are falling without a fight leads me to believe I am correct:) I hope …….

The zionist rats are running back to their illegal squats in occupied Palestine.

The writings on the wall! Time for a new middle east paradigm.

Apparently Daraa is going into the Guinness for the fastest City in raising white flags, lol.