On June 5, the Syrian Arab Army (SAA), backed by the Russian Aerospace Forces, launched a new ground attack on positions of the Free Syrian Army (FSA) along the border with Jordan in the eastern Daraa countryside, according to the Hezbollah media wing in Syria. 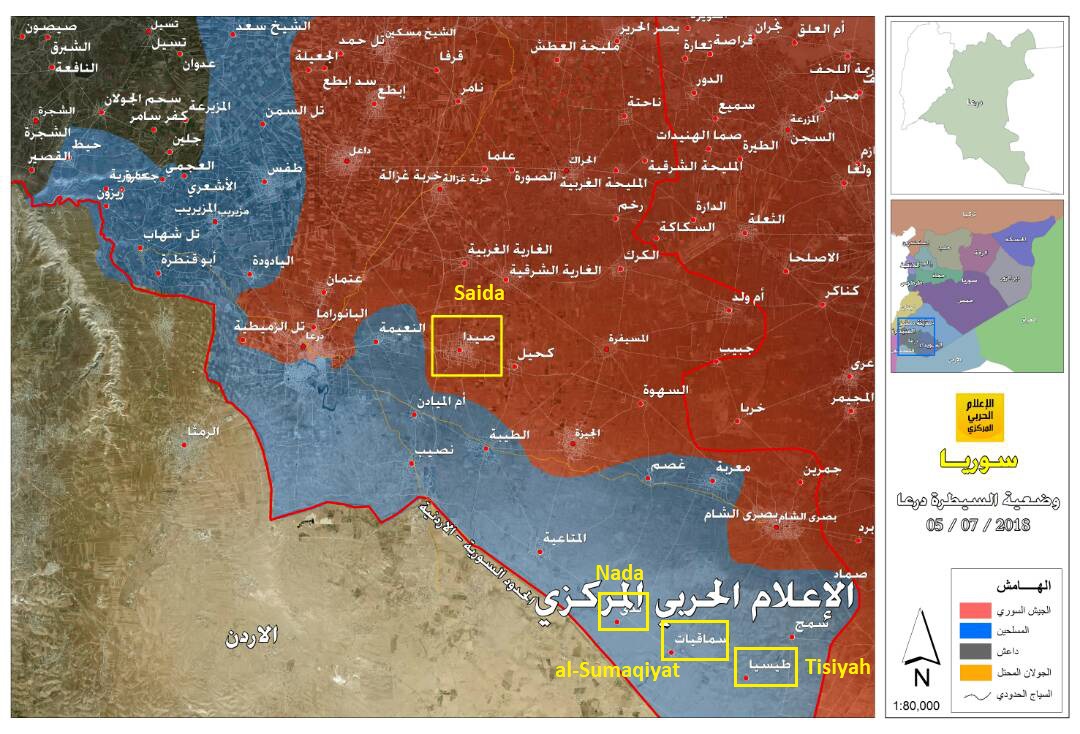 This is the first time the SAA enters these border positions in the eastern Daraa countryside since 2012. Currently, the army is stationed less than 15km east of the strategic Nassib border crossing.

A reconciliation agreement with the US-backed Shabab al-Sunnah group in the nearby town of Bosra al-Sham facilitated the SAA advance along the Syrian-Jordanian border. The SAA will likely continue its advance along the border in the upcoming hours, unless a general agreement on southern Syria was reached.

Will FUKUS puppet Abdullah of Jordan allow his pet Orcs to flee across the border?

I like Bob’s response. Abdullah may be a FUKUS pawn, but he’s not stupid enough to let the Orcs rampaging in Syria enter his lands unopposed.

Very doubtful – the Jordanian leadership well know that hosting various factions of embittered paramilitary militants, with HTS all over the mix, camped idle inside Jordan is basically inviting destabilization inside the front door. The militants will be left to their fate in Syria – the communications sent from US embassy in Amman to FSA commanders, that they were on their own is the writing on the wall.

Yup. Abdullah’s dad should have told him about having “guests” that decide they like visiting so much they decide to stay and claim ownership! :D

Haha. Palestinians that are now seventy percent of his population . Haha

I would much prefer they run riot in abdullahland to pay him back in his own coin,yet i am happy if the Russian bombing helps them fertilize the deseet in Syria.

They wouldn’t. At least they shouldn’t. I’ve been kept surprised by how much subservience of these gulf puppet can display that i wouldn’t rule anything out yet.

Across the Border and onwards to the Arabian Peninsula where Mohammed Bin Salman is ready to send them on to Yemen to Terrorize & Kill yet more Innocents ……… Very Many won’t wish to enter Yemen and face the Houthis where there will be NO mercy shown towards them.

Yes yes yes, take out the Saudis, and it’s game set and match.

Russia flew airstrikes from Jordanian side as that is what they actually discussed with them recently. Last I heard they were 2km from Nasib crossing but near the eastern train tracks near the crossing. SAA had attacked some Terrorists on the Jordanian side after they retreated from Daraa think the Jordan Army was happy.

Well everything up until outpost 67 along the border to Nasib crossing (2km) is taken (seen a reporter sitting on rail tracks earlier today it’s 2km from the Crossing) and there is now a pocket in eastern region developing and Tiger forces group is moving to the West to be redeployed now.

The West Pocket, including Tasil will be the key. How far will Bibi go to protect his proxy Orcs? Will Trump show any spine and not just do as Kushner orders?… Is Kushner an Alien shape shifter? :D

Seriously, though. This is the Endgame and the puppet masters behind the Orc gangs have to decide whether to fold a losing hand or to raise the stakes and risk WW3.

They left out posts to 67 retaken and now the last town before Daraa City is retaken Naimah so the 4th Div in the City will attack south and hit al Balad District. 5th Div and SRG have taken the hill Tal Saadeh north of Tafas should be able to strike the town from there. SAA is pounding HTS with StoS and artillery near the Jabal Turkmen hills near the Turkish border.

It’s not really up to Abdullah to decide. But if it was, he could always put them in labour camps with fences! ;)

Bullets in heads would be better.

I love this rapid advance of SAA and of their allies in Daraa and Golan Heights operation.

Both Jordan and Israel are amassing troops in their respective territory. It will be quite interesting if they later decided to interfere directly and got themselves answered in kinds.

The Russian missiles await the press of a red button.

I very much hope so Russia made it clear on their support to Syrian efforts of regaining their territory back. When they agreed to withdraw Iranian and Hezbollah force in the southern Syria i do believe it will reduce tension in the area but any funny business will not actually carried out by Israel but the US and this one only understand through force. Lesser fighting forces in the area would only encourage these vermin.

They would only attack, if they could guarantee air superiority, and I doubt they could do that.

Here’s Daddy – fuck off or die.

What’s going to stop the terrorists from just Fading Into Jordan?

The US is transporting them to eastern Syria. The US has invested a lot of money training these terrorists, and they aren’t about to let them retire.

That is a good point, but the transportation is going to start getting harder and harder.

It seems the US has abandoned Jordan as its route to infiltrate and destabilize Syria, and is now using Iraq as its preferred route to ship terrorists into Syria. This is good in some ways, because south western Syria is more populated, so more people will be saved from the American terror. But at the same time, it is much more difficult for Syria to prevent illegal American terrorists from entering the country in the East.