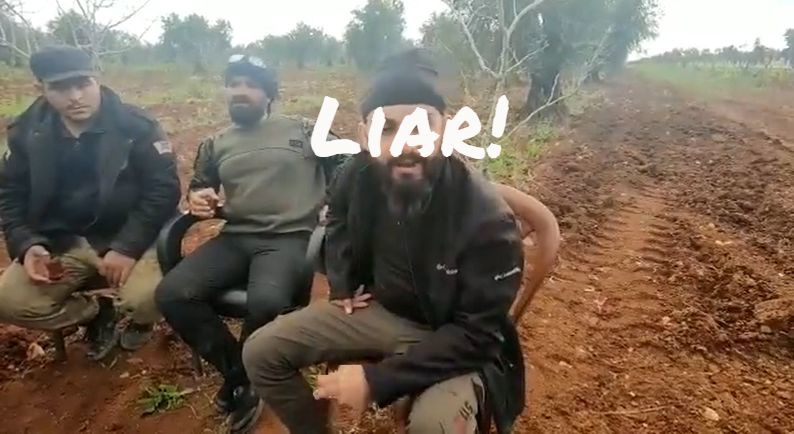 Screen grab from the new video, originally posted on Twitter by (@rahhalahmad06)

Recently, a video showing Turkish-backed Syrian mercenaries complaining for not getting paid after fighting for Azerbaijan in the disputed region of Nagorno-Karabakh went viral.

The mercenaries seen in the video have now retracted their confession in a laughable manner in an attempt to clear the name of a notorious Turkish-backed commander.

On April 11, the mercenaries appeared in new footage claiming that they fabricated their last video and made false accusations in exchange for money. The militants claimed that they were paid by Ahmad Rahal, a former Syrian Arab Army general who is now working as a pro-opposition political analyst.

Rahal is a known critic of Turkey and its proxies in Syria. Last year, he was briefly arrested by Turkish authorities for no clear reason. The arrest was deemed political by many in the Syrian opposition.

In the last video, the mercenaries acknowledged that they fought in Nagorno-Karabakh last year. They also accuse Mohamad Jasim, also known as “Abu Amsha,” the leader of the Turkish-backed Suleyman Shah Division, of stealing their salaries.

In the new video, however, the mercenaries deny fighting in Nagorno-Karabakh and claim that they held a fake protest in exchange for a few hundred of dollars paid by someone close to Rahal.

One of the mercenaries complained in the first video about being injured in Nagorno-Karabakh, only to claim in the second video that his leg was injured as a result of a “motorcycle accident”.

The new video was widely criticized by opposition activists, with many speculating that the mercenaries retracted their confession after pressure or even threats from Abu Amsha and Turkey.

The participation of Syrian mercenaries in Nagorno-Karabakh battle is well-documented. Around 2,500 were deployed by Turkey to support Azerbaijan’s attack on the disputed region. Over 500 were killed by Armenian forces. Some were even captured.

The battle in Nagorno-Karabakh, which started last year on September 27, came to an end on November 9 with a Russian-brokered peace deal between Armenia and Azerbaijan.

Taqiyya is akin to military deception and only permissible under certain circumstances, such as when lying is necessary to save one’s life.

Even I know that, and I’m not a Muslim.

Absolutely! this Diana must be a Y!D

You’re practicing taqiyya yourself. You hypocrite, you went mum after I provided proof that Putin is a Jew: https://www.quora.com/Was-Vladimir-Putins-mother-Jewish?share=1

Your “proof” is rubbish. I didn’t bother replying because I have better things to do.

Maybee hear hed and behind was circumcised :(

Please post the definition of ‘taqiyya’… and then compare it to yours!

In case you’re too lazy or because you’ve been found out… here is the definition; . Taqiyyah, in Islam, the practice of concealing one’s belief and foregoing ordinary religious duties when under threat of death or injury. Derived from the Arabic word waqa (“to shield oneself”), taqiyyah defies easy translation. English renderings such as “precautionary dissimulation” or “prudent fear” partly convey the term’s meaning of self-protection in the face of danger to oneself or, by extension and depending upon the circumstances, to one’s fellow Muslims. Thus, taqiyyah may be used for either the protection of an individual or the protection of a community.

You are right. The Choran has two verses allowing it. The rest of us lie too.

Diana Cornwell dont know when she is lying.

Cornhole, why you lie ;}

The NATO/Turkish Ziowahhabi terrorist rank and file are lying like the Putin partisans denying Putin’s business and partnership with terrorist Ziocorporate globalists from the EU is greatly profitable for the Russian Jewligarchy, like in this example from a Putin ally:

“Billionaire Valery Kogan is quietly building the most expensive home in Israel… costing an estimated $100,000,000, it features $500,000 worth of gold leaf, and a eyebrow-raising $2 million gold gate around the property” https://www.reddit.com/r/Damnthatsinteresting/comments/89bwkg/billionaire_valery_kogan_is_quietly_building_the/

Now, many say business and partnership is “necessary” to “avoid WW3”, but then that implies that the Russian military is so weak it can’t keep WW3 from happening unless Russian elites are intertwined with Western ones so the questions arises: Would the NATO terrorists’ pseudo-sultan be sending Ziowahhabi scum to Libya, Yemen, Armenia and everywhere if he didn’t have an ISIS/al-Qaeda mini-caliphate in northern Syria to breed them?

You do what with nuts ?

What do you think India ?

– Russia to Provide Weapons to Pakistan in Bid to Fight Terrorism –

” Aside from providing weaponry, the country said it will begin joint exercises with Pakistan to toughen its military presence at sea and in the mountains. ”

who is this valery kogan?

https://www.timesofisrael.com/caesarea-mansion-goes-on-sale-for-nis-845-million/A mansion in the northern coastal city of Caesarea is for sale — for NIS 845 million ($259 million).

How did he get so rich? Id love to have his homes lol

If they didn’t retract they would have been volunteered to go fight in Yemen.

Humans are not divided in two like that all.

The self-styled isis terrorists in the movies were masked, were actors and NATO agents, they could not act differently, while these sub-human waste turn videos and show their face to the whole world, and not once but several times, maybe they are so Naive not to think that are putting directly on the line of fire throughout the rest of their lives, but how much meth they have to take to be so superficial and irresponsible? drugged without art nor part.

As we again see, we cant rely in much about a lot.

But we can rely on the sworms of stupidist comming in as flees to dirt choosen themself to be brainwashed hooligans hardly have any oppinion themself.

ahahahhahahaha i hope they get blown away