Leadership of the Syrian Kurdistan is going to announce setting up of the Army of Rojava and northern Syria. 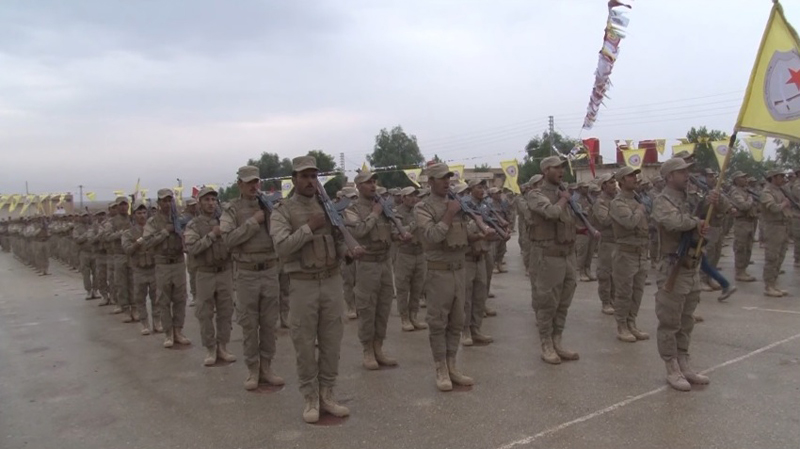 In the near future, leaders of Syrian Kurdistan (Rojava) are going to announce creation of the Army of Rojava and northern Syria, the Kurdish К24 TV-channel reported in reportage about celebration of the second anniversary of the proclamation of the Kurdish autonomy in northern Syria. Kurdish regions in the north of the country are divided into cantons: Jazira, Kobani and Afrin.

On October 28, in honor of the second anniversary of the proclamation of the autonomy of Syrian Kurds, a parade of first units, which will receive a status of military personnel instead of a status of militia (on the analogy of the Peshmerga in Iraqi Kurdistan), was held in the Ahmed Bader Military Academy on the outskirts of al-Qamishli, the capital of Jazira canton.

The Syrian authorities in Damascus do not officially recognize the Kurdish autonomy, proclaimed in 2014, but they can do nothing with it because the Syrian government has absolutely no control over the north of the country.

Mistake by Kurds. Stay together, but figure out some relationship with Damascus. Turkey will eat you up.

Where do they get their weapons? Kurds making a mistake because Syria will not be partitioned.

The Ottoman Empire will partition Syria if nothing is done about Mr.Erdogan’s ambitions.

Well Russia is a Federation (Russian Federation) as well. I don’t see why this is so super scary. :P All these labels don’t mean too much for now.

And which republic has own army??

when every region start to have it’s own army, that’s a sign you are about to loose the state.

I love the kurds, but this is just a publicity stunt, nothing has substantially changed and anyone who thinks this will walk long-term is mistaken. there is no need to panic. in fact, I think it’s Erdogan who is panicking the most from this whiff of independence, and he will be even more enticed to attack them now. Turkish threat will, one way or another, force the kurds to side back with russia and syria. look, euphrates shield is a miserable little wedge between two big kurdish regions. it’s a matter of time before someone looses the nerves and Erdogan orders and all-out war with Rojava, which rojavans can’t roll back but which the turks will pay dearly with conscript’s bodybags a.k.a. election changers.