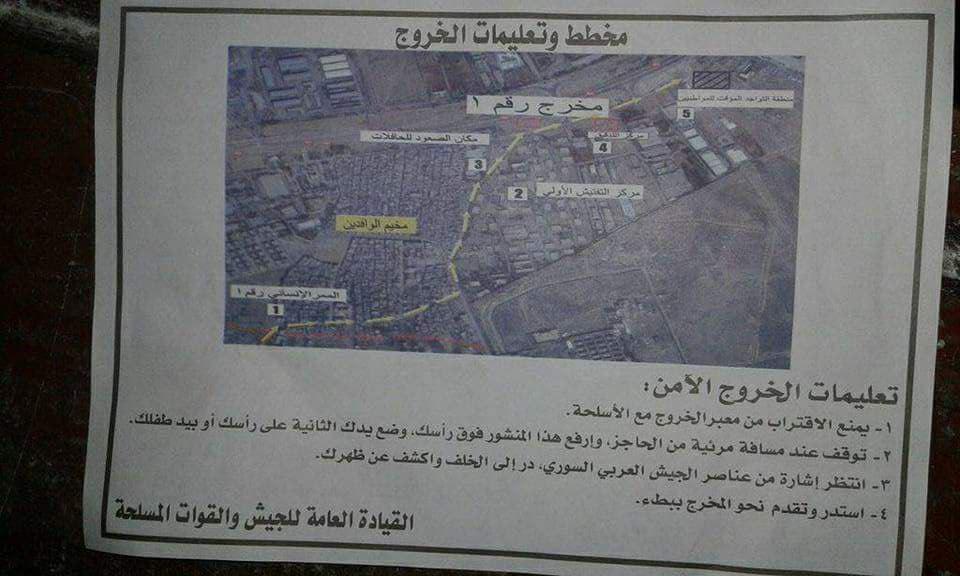 On February 22, helicopters of the Syrian Arab Air Force (SyAAF) dropped thousands of leaflets over the Eastern Ghouta pocket, in which the Syrian Arab Army (SAA) called on the civilians to leave the pocket through several safe routes and warned them that a military operation will begin soon in the  region. 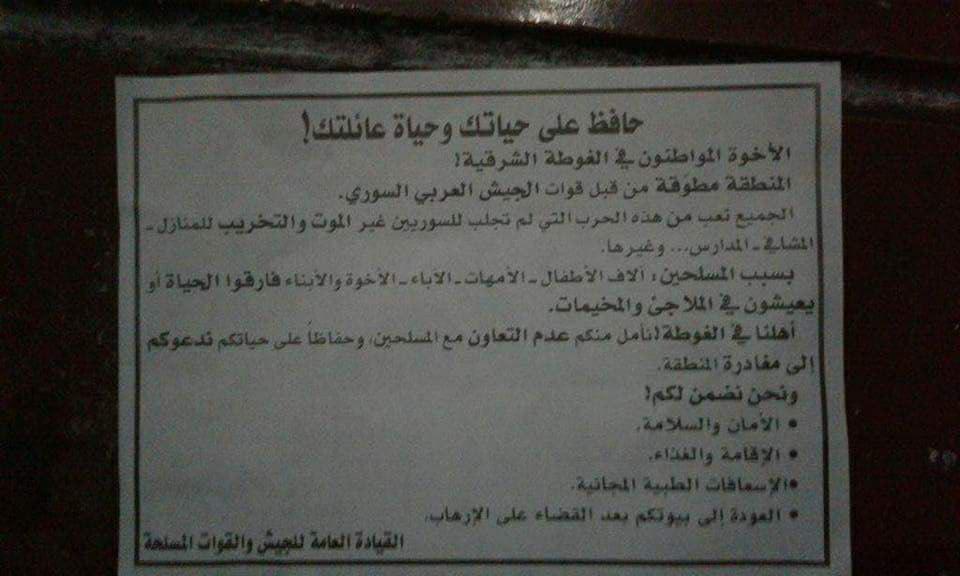 The SAA promised the civilians that it will move them to secured area, provide medical care and food and then allow them to return to their homes once terrorists there are eliminated. Similar procedures were taken by the SAA and its allies during the battle of Aleppo in late 2016. This allowed tens of thousands of civilians to leave the battle areas safely.

The SAA’s plan to evacuate the civilians from the East Ghouta pocket hints that the SAA and its allies are planning to clear the entire pocket from militant groups operating there: Hayat Tahrir al-Sham (formerly Jabhat al-Nusra), Ahrar al-Sham, Faylaq al-Rahman and Jaish al-Islam.

The Russian center for reconciliation of warring sides in Syria accused the opposition forces in the East Ghouta pocket of hindering the efforts to evacuate the civilians from the pocket in an official statement on February 21.

Time to ride the Green Buses, Orcs and Orc fanboys!

No green buses only black ones now instead of hearses!!!

The u.n Zionist criminals now want a ceasefire no deal

Do you want to ride a green bus downhill the Rocky Mountains?

Been there, done that.

Great, SAA playing open poker and all cards are on the table !!

Pentagon airlines will fly from idlib airport to holiday beach Maimi. No charge for all employees in the region.

Good luck SAA, good luck. The Great Purge is on the agenda. No mercy. Bury them in their tunnels, do the cattle drive and knock them out.

Nice going SAA keep the pressure on the Zionist gangs

No more cease-fire until all terrorist are eliminated.Just do as USA ignores UN when things are not in their favours.Aid convoy attack and others to come are well planned by USA and puppets.Including todays Israels Syrian airspace indrution with spy drone which Syria chase off..Be ready for any USA and Puppets distraction attacks and eventualities. Syrian real terrorist war is over now it’s terrorist breeders USA/NATO,Israel, Turkey and puppets war.UN Security Council knows it plays the game together on laid down orders by USA.

SAA should also establish 1or 2 ESTABLISHED SAFE ROUTES for rebels who would like surrounds to SAA and again there is no need for ceasefire or stop advances, because SAA advances most likely will be condacted in diffrent area as East Ghouta is large packet

I am sure there are plenty of US, UK, French, Turkish, Saudi Arabian , Israeli intelligence “officers” on the ground in East Ghouta. They can be captured and deals made with the respective countries. My proposal… Shoot them on site..

good proposal I second the notion.

There is for sure agents and intermediaries for those countries intellegence services on the ground in Ghouta. They can even in some cases be nationals from those countries. The ammount of false flags, distractions and MSM fake news will give us a clue about how many they are.

Those have already started calling for cease fire, humanitarian aid (of course this would allow for extraction of freshly shaved and Burka clad male fighters and foreign advisers) while rearming weapon supplies and captigon.

It is as usual the terrorist rat’s and their master who are illegally in Syria who call cease-fire.

No ceasefire until the Zionist gangs in e ghouta r defeated

Thumbs up it is true that useless UN security Council which only serve USA and NATO interest.

I’m with you brother.

Some years back, before Iran came in, the British were sending regular missions of SAS into Syria. Back then, if they got caught, the Syrian army would just hand them back to the British. Then an Iranian patrol cornered the SAS, and killed them. Cameron, the UK PM went ballistic, babbling on about war crimes in Syria. A few days later, the British claimed that British soldiers were killed in Afghanistan, but there would be a delay in retrieving the bodies?

The green terrorists will still cry “sunni genocide” despite all efforts by SAA to evacuate the civilians. Green terrorists really need human shields, because their only hope is a NATO intervention.

The more bombardment eastern Ghouta recieve the hard it becomes to open. The rubble of the city will turn into a massive hideout along with their tunnels.

This is what a german who experienced fighting in stalingard will tell you. They the bombed the city completely down and they said it became 100-times more difficult opening it.

I’m also of the opinion that they already tried to push their way in but got repelled as Jaish al Islam already informed.

A big difference between Stalingrad and Ghouta. At Stalingrad any Russian who could would kill a German invader. In Ghouta, most Syrians would love to kill the mercenaries fighting for Israel. Even those who cannot fight, will do whatever they can to aid the Syrian army.

You cannot suppress a native people who are determined. Vietnam Afghanistan and even Cuba are examples of the people fighting to expel foreign invaders..

You gotta be kidding me. Do you seriously believe the Shiites militias and Assad would have survived if it was not for Russia and the US.

They entered this Civil an took on 2 different actors that was a direct threat towards Assad and we are not talking about some minor powers but big powers.

The US went in to fight ISIS (Who admittedly were an anti-Assad actors) this did huge favor to Assad.

Assad and co lost the fucking war in 2014 then Russia stepped in and completely took on the rebels this changed the dynamic of this war.