After the liberation of Western Ghouta region, located near the Syrian capital, Damascus, the Syrian military became capable to deploy additional forces to the northern part of Hama province in order to relaunch offensive operations in the area.

The militant-controlled town of Taybat al-Imam will most likely become the target of expected government offensive in Hama province due to its proximity to the strategic M5 Highway. 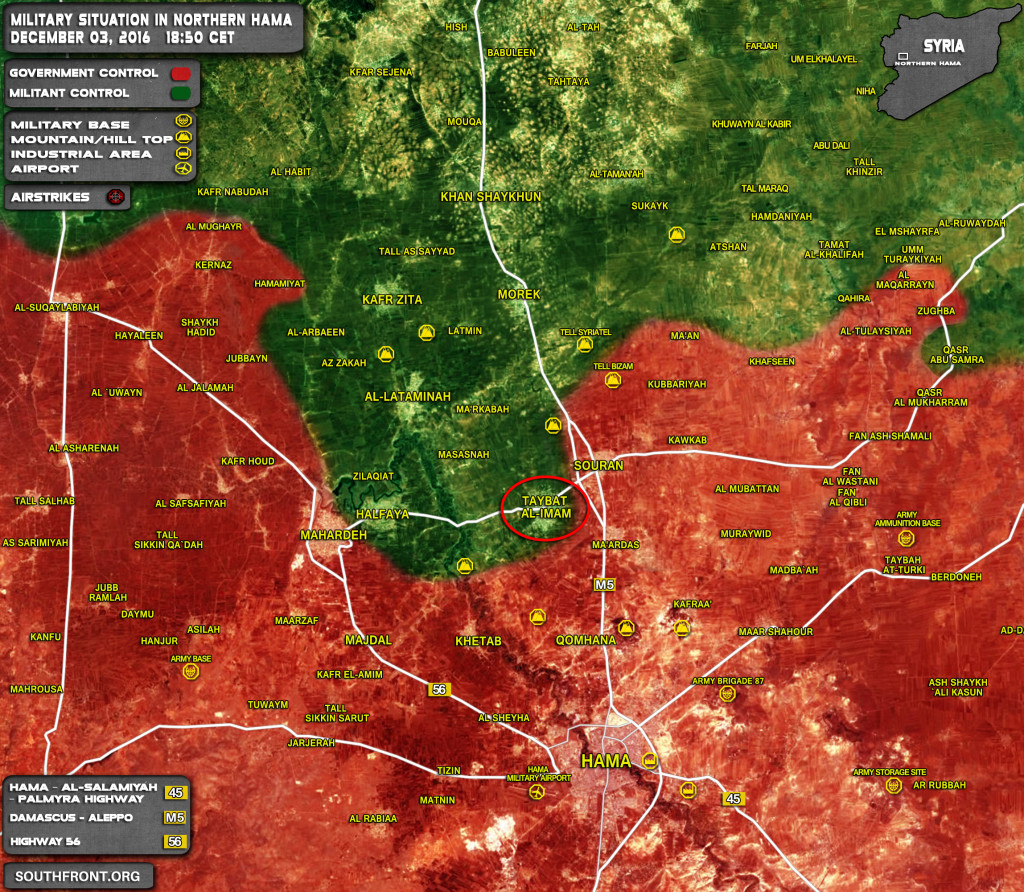 whyyyy?????? this doesnt make any sense! if you have 1500 soldiers to juggle, then send them to conquer Al-Bab or at least to EAST Ghouta to clean it up and make that same M5 highway safer! Hama has in my opinion nowhere near the strategic importance as Al-Bab or cleaning up Damascus pockets!

Al Bab is too far, and Turkey is too close there. Maybe East Ghouta can be won later the same way Western Ghouta was won. So it looks reasonable to send them in the nearest hotspot – Hama. Also, the article is talking about a “pro-government volunteer group”. You should ask them where they want to be deployed.

The SAA and their Kurdish allies are only about 4km away from Al Bab from the west and about 10-15 from the south. If turks take Al Bab then essentially they will have pushed down their border right on the doorsteps of Aleppo city. SAA shouldn’t let that happen, not on their own land.

Yes, that’s what i was worrying about. it’s imperative (in hardcore sense of the word) that SAA takes Al-Bab. now, strengthening Hama front makes sense to stop a breakthrough (you never know) but al bab should come much higher on priority list.

It needs more then 1500 fighters, because ISIS will not let it without a tough fight and then once you liberate it, you have to defend it against the Turkish backed rebels with turkish army at the gate of the city. Let Turkey and turkmen fight ISIS for now, SAA need to consolidate its position in many other parts of the country.

This make sense. Inthe last 2 weeks from West Gouta and Al Tall come over 3500 Rebels with ther families. Around 1500-2000 are fighters. They where deployed in this province… One part of this fighters will go to Aleppo to breka the Siege part 154564, the other wil go to Hama

Don’t forget that the front line is very close to Hama city which is said to be home to quite a few jihadi sympathizers. Jihadists will try to take the city in order to bolster their ranks.

Hm, I get what you are saying. with all that fighter influx there could well be another Hama offensive, and unless you put some muscle on the front line in time this could end up needing another fire brigade / call to Al-Hassan at the moment we don’t want to disturb him. essentially the power ratio between government and terrorists stays, but at a much convenient place than pockets in Damascus countryside.