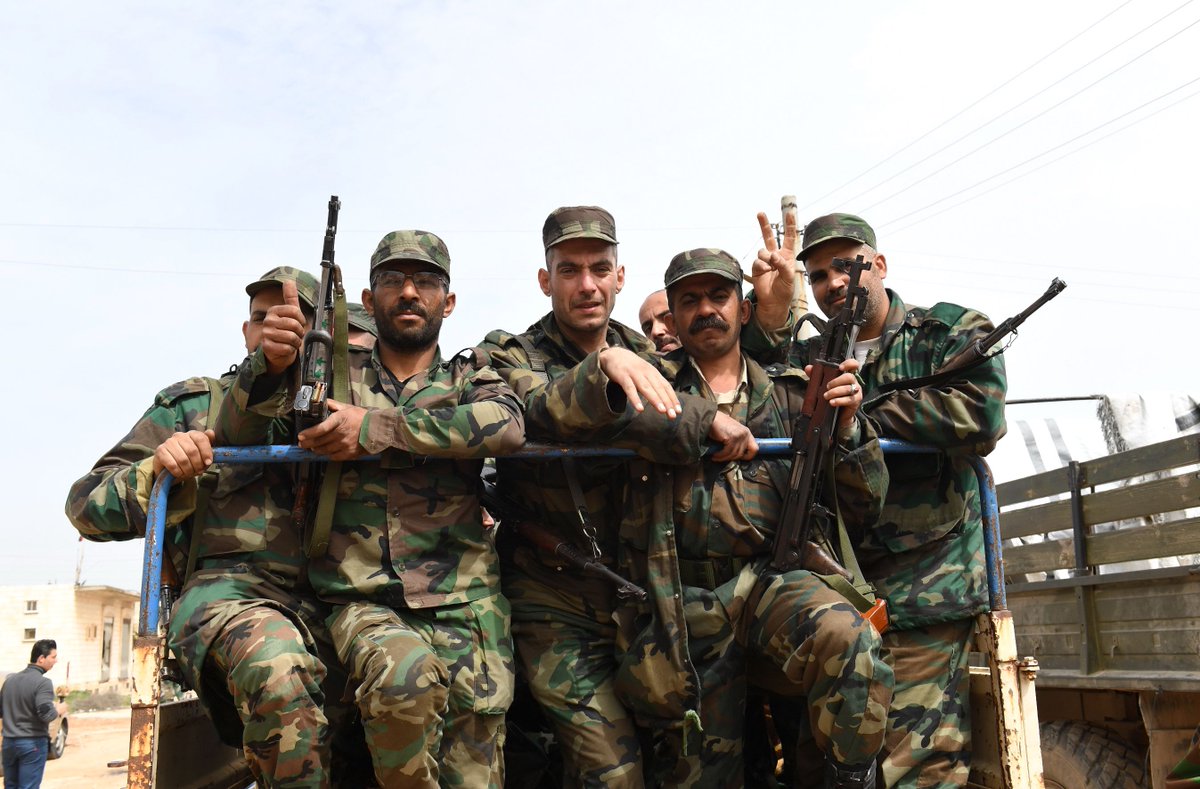 The Damascus government is preparing to open a humanitarian crossing with the northwestern region of Greater Idlib which is occupied by terrorist groups and Turkish forces, Russia’s Sputnik reported on February 20.

Sputnik’s reporter in the region said the humanitarian crossing will be used to evacuate civilians to areas controlled by the Syrian Arab Army and its allies.

“Government agencies have begun preparing a humanitarian crossing in the town of Saraqib in coordination with the Russian side to ensure the evacuation of civilians wishing to leave the areas controlled by armed factions towards the areas held by the Syrian state,” a Syrian official told the Russian news network.

According to the official, government agencies are working to provide all necessary services, including medical assistance and temporary shelters. The official said that the preparations will be completed on February 22. The crossing will likely open then.

Over the last year, the terrorist group made a number of attempts to open a trade crossing with government-held areas. At the same time, the group used force to prevent civilians from leaving the region.

Turkish pressure could force HTS to allow the evacuation process. However, Ankara does not appear to be interested in any solution that would weaken terrorist groups in Greater Idlib.

It seems prudent to temporarily move the locals out of harms way whilst the SAA fumigate the area of vermin.

The SAA might just starve them out. No more locals, no more trade. No more supplies, from Syria anyway.

Its not like that at all. I espect to see You by the cameras on the new marslander . A Danish instrument there even can tell how old You are. We also has a microfone, so we can listen to You and Your winds from Your behind.

You had some of the good shit today, that hasbara for shekels got you the best crack in town. Putin might bomb one or two of your favorite terrorists, but as a good business partner of terrorist Ziocorporatism, will deliver Nordstream2 gas at a very competitive prices.

I hope this means there will be a massive assault on the terrorists,like in Aleppo,many of those terrorists Apes in Idlib came from Aleppo when it was liberated on a green Bus

The Syrian admin has put all they have caught into a captive area to be cleared out at a later date. Those terrorists in Idlib know this, in fact everyone knows it. Let’s hope that date is soon.

How willing do you think Putin is to break business relations with thte terrorist Ziocorporate globalists? It doesn’t seem all that likely, there can only be some operation with very limited scope, at the very most. You wouldn’t finish bombing NATO’s terrorists in Idlib until you reached the Turkish border.

I wrote that too. People prefare anything else then Assads.

The man problems are, they are not united for the same.

jens mohammad, that naughty corner thing is very jew/ shyster culture. Why didn’t you say all this while that you were jewish? Why are you ashamed of your own heritage? Just man up no? why hide?

No US is needed. Turkey will be in Damascus within few months in such an escalation

you are cornered inside a small jihadi enclave and now you talking big?….lol…..are you a guppu mongol turk?….lol…..How does it feel now to lose in Syria?

Lmao lose! We are in fact winning expanded further. Just look at the maps. Syria, Iraq, Libya, Nagorno-Karabakh.. put respect on my name and if you provoke me I will be in Damascus watch out where you step on

lol…..ok turkish bro….I keep telling that servat kosegoplu the same thing that Iran don’t hate the oglu toglu because Iran has Azeri guppu too in its population, but here you are….trying to proclaim greatness and conquest and what not? Come on brah….lol…..easy brah….eeeezy.

Many has expanded like that and relative fast. The mainproblem is keep.

I dont see they loose.

but how mr hebrew? you know the truth no? or youd’ve been sitting in damascus runin the show bro? What would be the optics of that show? head choppers? like in Auschwitz? only now that they are wahabbi guppu on rent? Come on brah……don’t make me laugh.

Lol You Turds are funny, still struggling with some Kurds, delusional Turks.

Damaskus dont have that big graveyard.

When I was on Google Plus, there was some headchopper fanboy calling himself Johnny Syria who kept predicting that “Assad will inevitably fall” and that in “five years Libya will be a paradise”. In 2013 I said I would check back with him in five years and ask where his predictions had gone. In early 2018 I did check. He had deleted his account.

Somehow this seems to keep happening with predictions by headchopper fanboys. They aren’t very good prophets.

We all knew that. Predictions often are more hope then realisme.

I have not seen any tell, it should be a paradise.

It was a big mistake to listen to the Syrian diaspora telling FSA was strong and could be organised.

Later on sujpporting ISIS hard for a while as dark horse made Assads to enemy number two instead of number one.

It would have made more sense USA, UK and France only used isolation.

I partly agree in the Libya incident too. But to me the glass was dripping full and ran over, so some kind of hard action was needed.

I have many times told, that Libya for many centuries was at least two Sultanates partly affiliated as Osmans. By that it would make sense to regain two states and one in south. They could share the oil but by the money given to each hand and fx chldren half for schools and education.

There has been no “after” plan. I have it with things like that as wjhen we eat. The meal is not over until fork, knife and spoon is claen and ready for next meal.

But there is a point to be made, that should be obvious for everybody…

Any direct confrontation between TAF(turkish armed forces) and SAA, will cause heavy amount of losses for both sides, men and hardware…………and dam, it dont take a maths genius to figure out that fucking equation………syria is a beaten down state, currently occupid by evil NATO forces in the north, south and east and occupied east by Israel on the golan…………..

idlib aint never coming home….as is afrin…………………….take a look at the turkish/zionist program for AFRIN……

Putin is a treachrous zionist pig

Dumb Turk, the only butchers are the Turd regime and their bearded butt buddies doing their dirty work.

Unfortunatly You are as many here and their fanatic fan clubs. Turks and affiliates are not even mainkillers.

Many are responsible but the most important ones are the Baathists which by grabbing, no devellopment fx making education and nwe jobs made this possible.

A country is a country – based on half of a big landscape – if it try to include all inhabitants. How can a country name it self as Arabic even 30% is not. I also allow me to mention, that Syroa is a complete new country and by that.

Thats were the waste of life and living is destroyed. Today Assads even insist and fx has invaded Lebanon too.

I will predict nothing about Syria iof it exist. 1/3 of its inhabitants are not even in the country. Hardly any of them support any in Syria.

I agree. Most there will see it as an entrence to hell.

Lol, Syria can handle those over-rated TB-2’s or any of the other drones. They had plenty of experience downing those pieces of junk last year.

BS troll, they hit hardly any pantsirs, Turk terrorist drones got fucked last time and lost plenty. Even your ‘mighty’ IDF struggles to hit them – how many of your cruise missiles have they shot down now? 100+?

But I know you’re just here to stir up shit anyway, so I’m not buying it. Get a life troll.

lol IDF have hundreds of thousand MISSILE. 100 shot down does not put a DENT in IDF inventory you skunk!

“Butcher” coming from the mouth of a Jew that are only good at killing unarmed civilians, your people are a joke!

why did you upvote yourself ;}

why not because freedom mean nothing to you? nazi piece of sheeeeet

Sounds like Syria and the Russians are getting a little tired of the Ottoman protected al Qaeda mini caliphate in Idlibistan.

Turks got their ISIS/al-Qaeda mini-caliphate in Idlib with the Western Ziocorporate terrorists’ blessing. NATO’s terrorist ISlamists are gatekeepers for Ziowahhabi globalism.

Why do you people keep lying? It was Putin and the Russians that transported the Muslim terrorist ISIS and their family members to Idlib in air-conditioned buses. It wasn’t Israel nor NATO.

The biggest reason ISIS are getting stronger is because Putin helped them to survive instead of killing them.

Yet you boys keep blaming NATO and Israel for being ISIS.

Didn’t Putin just massacre your Christian brothers the Armenians in Karabakh in collusion with the Jihadis and the Turks?

How hypocritical you all are.

if russia and syria killed those rats and did not transport it in the rat infested idlib, western nation human rights watch will cry foul for killing their pet rats, thats why instead of killing them, they are culling them in idlib

Oh, That’s why Putin helped the Turks and the Jihadis slaughter his Christian Armenian allies I suppose then? Neither Putin nor Russians care about human rights. How could they, when the Russians are building nuclear power plants for the Turks who genocided — and keep genociding– their Armenian allies? Scratch a Russian and there pops a Turk from underneath.

how did russia help the turks and azer? do mind explained it?

1. Russia sold more advanced tanks and weapons systems to the Azeris than the outdated stuff the Russians delivered to the Armenian side at extortionary prices. 2. Russians practically invited the Turks and the Jihadis into the Caucasus. All the Russians had to do was ASK the Turks and the Jihadis to stay out. 3. Most crucially, the Russians collaborated in killing the Armenians by withholding their Electronic Warfare assets which would have prevented the massacre of their Armenian allies by disabling Turkish and Israeli drones.

This was a good move for NATO’s benefit: now we have Turkish and Israeli bases and presence firmly established in the Caucasus.

Diana Cornhole Armenia turned there backs on RUSSIA and became pro western, why the hell would Russia help out a friend of NATO? Why didn’t your government help them out?

Why should we? Turkey is part of NATO and BP has crucial oil-related interests in Azerbaijan. Though I feel sorry for the Armenians, the end result served NATO’s interests. How stupid you are. Armenia was your ally and you betrayed both the Armenians and Russian national interests by inviting the Turks and NATO in. Suits me. But not you. Silly Russians. Ruled by the Tribe (Bolsheviks, “oligarchs,” etc.) since 1917. Russian girls are lovely though. They are everywhere, selling themselves to the Turks, Arabs and Americans for not much.

The question is how stupid are you. That was not Russia’s war and why would Russia help out any pro west nation? Think before you speak ;}

So it’s OK for Russia to install NATO in Russia’s backyard. As for the Armenians, you’ve been screwing them for 2 centuries. What did you expect? Anyway, I’m glad you’re enjoying NATO bases on your borders. More on the way.

What parallel universe do you live in?

Not even the Amerikastani zioganda spread by the likes of Bellingcrap and Jihadi Julian Röpcke ever claimed Russia transported ISIS to Idlib, or that matter anywhere.

Good news! We could really use a lot of Idlib liberation articles now.