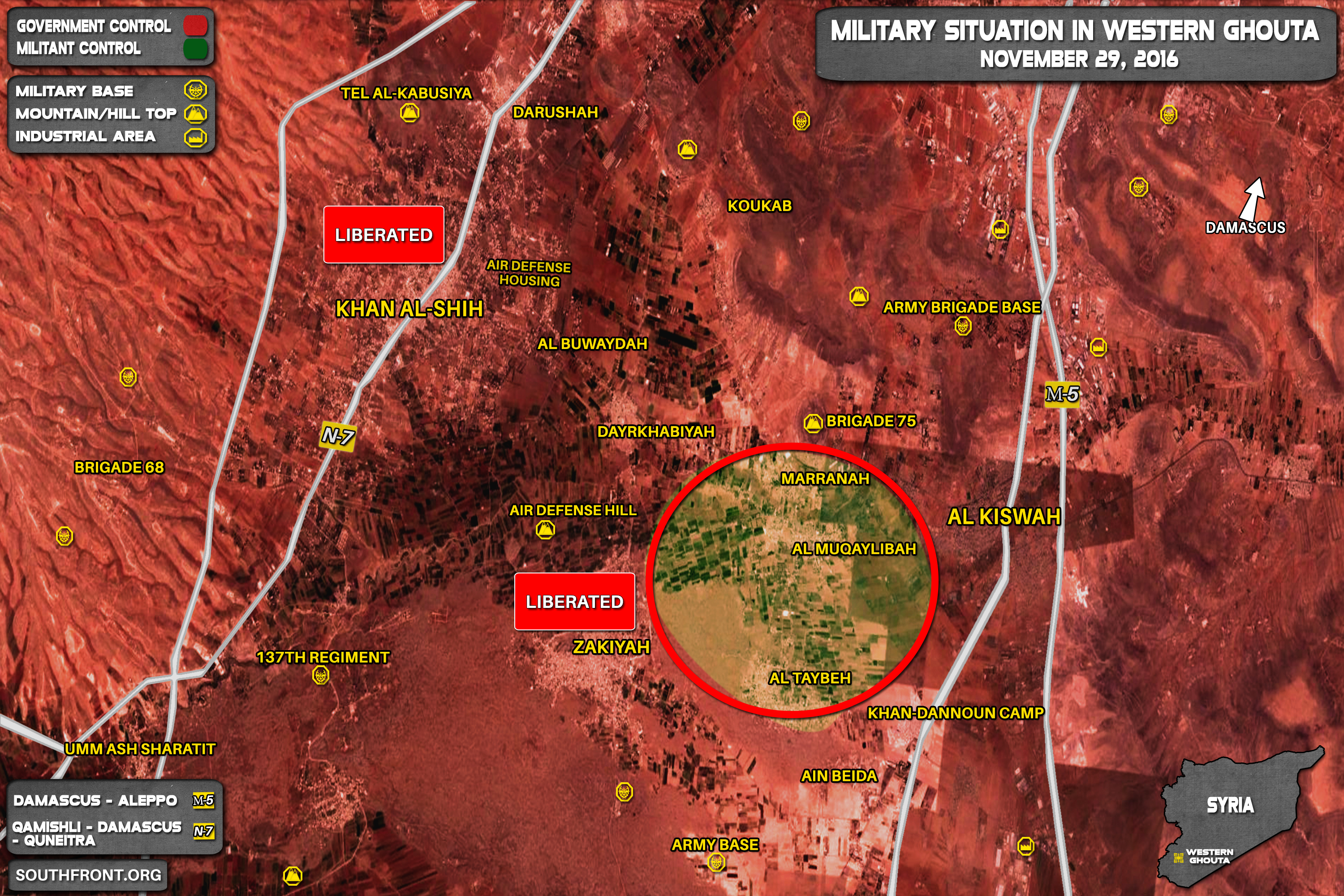 Jabhat Fatah al-Sham and Ahrar al-Sham militants are completing the withdrawal from Khan al-Shih and Zakiyah villages in the Western Ghouta region of Rif Damascus.

The first group of militants (over 20 busses) leaved villages yesterday in the direction of Idlib under the agreement with the Syrian government. November 29 is the second day of the withdrawal when the rest of militants is set to leave the area. Reports say that over 3,000 members of miitant groups and their families are involved into the transporation agreement from these villages.

The Syrian government has set control over Khan al-Shih and Zakiyah with established local committees.

Meanwhile, reports appeared that militants from Muqalibah and Taiybah had also agreed to withdraw from Western Ghouta under the deal with the Syrian government. Militants from Marranah will likley joint this deal.

Thus, the Syrian government will set control over the whole Western Ghouta region.

The impact of this, in my opinion, is earth shaking for the country of Syria. The implications for the insurgents and their sponsors are dire. The situation is proceeding along not a linear line of effects but, geometric to exponential. For how many years, have others toiled and cried that islamist rebels could not be beaten. Take a look at the map everybody, because it just is not true. Russian has demostrated through both military ferocity and diplomatic initiatives within the country, that it knows how to play the game. Perhaps I overreact in thinking that this is a mortal wound to Occiental motives and mode of operating in this area of the world. However, proof that it is not may soon be relegated to minds of the uninformed. I wish a good day to all.

I think the military planning and choise of strategic objectives changed after russian involvement. Normally air campaigns dont have such great effects on low intensity conflicts but SAA and RuAF developped good tactical aproaches to use it effectively. And above all allepo campaign was astonishing in terms of planning and execution. Creating mobile shock units such as tiger forces and provided better operational mobility for SAA. Russia proved itself as a reliable option for many other countries which need an international support. Balance of the Cold war is coming back.

Good morning Asil. Very well put and thank you. Another angle of what Russia is doing involves rebuilding the SAA. They are revamping it´s logistics, training and equipment maintenance. They are creating a modern and effective 21st century military for the country of Syria. This may be another aspect of why some are not comfortable with the level of Russian involvement. It is possible that the SAA will be able to successfully fight anybody in the region, by the time this is over. What they do with that is an entirely different ballgame.

Thanks John good insight from you. but i am skeptical about the very modernization of SAA. Check this article, it mainly dicusses the survivability of SAA and argues that the pre-modern structure of SAA helped them to survive this so called low intensity war.

A very interesting and brief article. It said a lot. Thank you.

The Iranian’s also had different ideas – they thought a cumbersome national conscript army was not always best tool for the anti militant/ terrorist role. They directed the move to creating patchwork umbrella of supporting militias: the NDF – less skilled but localized pro government militias fighting for their immediate environments and towns but not mobile fighting forces or on offensives elsewhere, and at other end, the Tiger Forces militia – the exact opposite, highly skilled and well equipped and deployed as trouble shooters to alter the balance of a front. That was Iranian driven approach to coping with unconventional and irregular militant forces – fight fire with fire.

Good stuff in both of your comments Bob. Thank you.

though the primary reason for abandoning of “SAA only” approach would not just be increased flexibility of NDF (resign enlist easier and on shorter notice) but also the incapability of SAA. SAA was /and still is (and i believe Kahadour from Carnegie Endowement) plagued by nepotism and – this has to be said clearly. BUT with russian involvement in retraining the SAA and army attrition (incapable officers are more likely to die on battlefield), the SAA might start absorbing more conscripts and grow in importance as their leadership and management capacities increase.

I agree with you John. The Carnegie report is dated (Mar. 2016) and doesn’t reflect the changes that the Russians have made to the SAA. This is reflected in the loses the SAA sustained in early 2016 but have been on a continuous winning streak since late summer 2016.

The strategies used by the Russians and Syrians will be reviewed and discuss for some time to come. They have been able to fight and beat the terrorists and their backers on both the military and political fronts. The integration of intelligence and drones with precision weapons, the ability to neutralize the huge propaganda machine of the west, the ability to adapt (the world doesn’t like mass bombardment? fine, we’ll use increased artillery), the use of the local reconciliation committees, etc., have been more important than some morphed form of corruption/nepotism as discussed in the Carnegie report.

For the first time the Syrians have a true sense of Syrian nationality. That is huge and should help carry them through the enormous and difficult reconstruction of their country.

You raise an interesting point of the effectiveness of the SAA (and all the militias along with Hezbollah) army. The recent Russian discussions with Israel shows the Israeli’s concerns on this matter. They do not want Hezbollah to keep all their heavy weapons, (tanks, ATGMs, etc.). The newer 21st century weaponry has been a game changer. No longer will a few kilometers distance between Israel and whomever be sufficient.

I don’t believe the Syrian will be doing anything offensively for some time, but they will be quite effective defensively. I doubt anyone will challenge them as the Russians will be part of their country for a long time.

They have to rebuild their country first. They will need President Bashar Al-Assad to lead and help ensure the country does not revert back to its old ways of corruption and nepotism. Syria has major issues (new political system, addressing income inequality, their expanding population/youth, creating work for so many, feeding themselves with the negative impacts of climate change, etc.) still to address. I wish them the best.

Good afternoon Douglas. I like what you wrote a lot.

You mentioned Israel. I was thinking along the same lines too but, didn´t write anything. For me the bottom line is Israel´s free hand militarily is over. They need to behave outside their borders. I know they are in a tough part of the world. However, they need to cool it a bit or they could create the next war themselves. Just an observation regarding them. I have nothing to grind with Israel.

Hezbollah has paid a heavy price for helping make this happen. I don´t think they are going home without some real toys in the inventory and backup in some form from Russia. They are nobody to be messing around with right now, even for US or IDF forces. But, I think they are going to focus on getting Lebanon back in order for a while.

That said, I agree with you. Maybe for the first time in a great while a truly asskicking military outfit, after gaining a stunning victory, will not be fueling up to go after it´s neighbors. I think that Syria´s focus will be on rebuilding the country for a very long time. After such a long and destructive interlude, that country could be an example of what peace could achieve.

Just my take on a couple of things. Have a great day.

I read some translated excerpts of Russian analyst published in Russian media, while ago, who was very critical of SAA’s then Aleppo command and the response to first big militant offensive on southern Aleppo districts that broke SAA lines. He basically stated, SAA commander’s use of infantry was poor, the best Hezbollah forces had been left stranded in 1070 complex fighting much larger incoming militant force, without any SAA reinforcements, and overall SAA infantry losses had been too high due to lack of effective tactical maneuvering. The Russian’s may have been involved at some level in restructuring, as SAA’s Aleppo commander was changed shortly thereafter, and during second big militant offensive on southern districts, SAA infantry were far more fluid and used tactical withdrawals, to both draw militants into kill zones, and avoid being encircled and needlessly lose infantrymen.

Great opportunity to hit those buses, have a terrorist drive though, be unfair for a Syrian civilian to drive.

Those buses probably will drive on straight to Germany.

Congratulations to the Syrian Arab Army and all supporting units, you have done Syria and its people proud. There are those of us in the western countries who rejoice with you. After neocons lost their perch in US elections, there wasn’t much point of fake nato jihadists fighting on. They know it’s just a matter of time because their supplies and situation can only deteriorate from now on.