Additionally to advances in the areas of Urma al-Kubra and Kafr Naha, units of the Syrian Army (allegedly supported by the Kurdish YPG) attacked positions of Turkish-backed radicals near Sheik Aqil Hill and Kafr Basin. According to pro-government sources, army troops suppored by the Russian and Syrian airpower are aiming to encircle and clear militants remaining in the western Aleppo countryide.

For this purpose, they will need to take control of Kafr Basin, Babis and Qabtan al-Jabal. After this, the defense of Hayat Tahrir al-Sham and their al-Qaeda-linked comrades will collapse. Supplies of MANPADs from Turkey are apparently not enough to change the situation strategically.

Maybe YPG decided to abandon their “partner” US and change their view with whom to fight. Would be a win-win for Kurdish people and Syria.
The question would be: What will happen, if YPG surrounds the Turkish “observation” post? Will this be a peaceful event, or will the Turks be scared to hell and do something stupid?

It’s not the first time SDF participate in such an attack.They did the same in 2016 when they helped the SAA besiege Aleppo.
The reality in Syria is more complex than what the media presents.

The YPG in the northwest is not under influence of the US. They might be a bit different than the SDF slaves in the NE. The question is if the YPG only helps the SAA against the Jihadis, or if they will jointly control the liberated area with the SAA.

has the Sultan declared war yet? ;o)

Really informative. Thanks, South Front, for the hard work that you do. 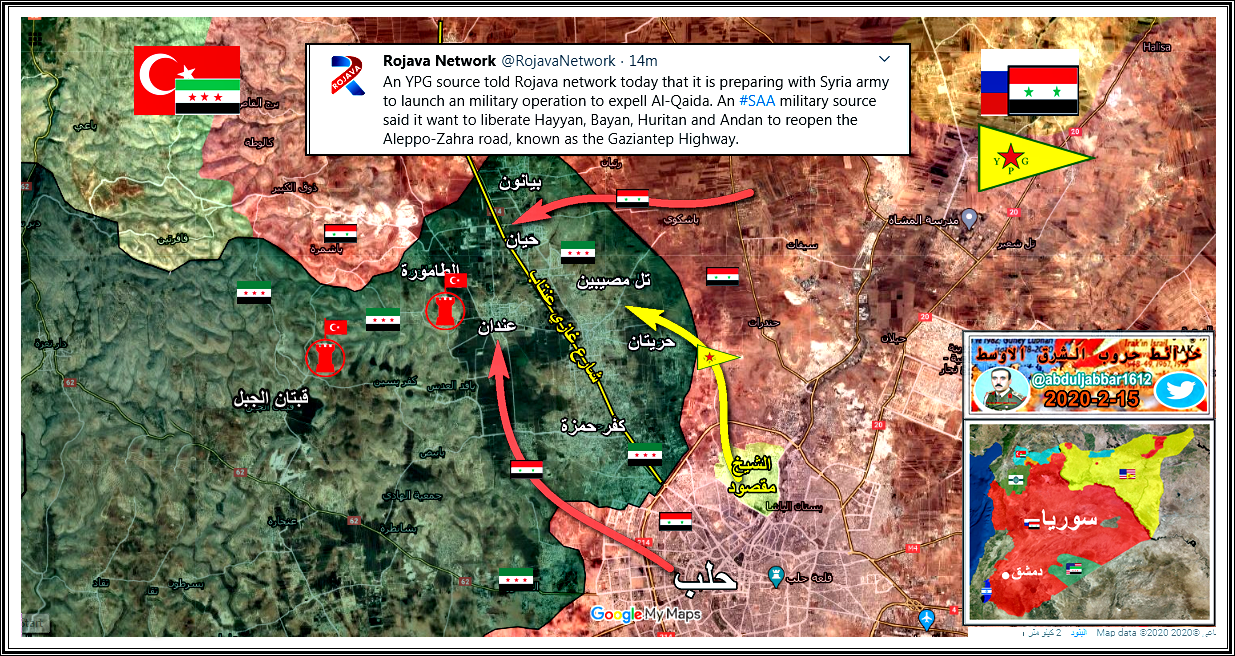 Hell yeah! About time that Aleppo get secured by taking the western suburbs. More Turkish terrorist service stations need to be turned into holiday resorts and having the YPG act as camp security would be icing on the cake,

erdogan will not be pleased, ypg best keep eyes on the turkish backed millitias near al-bab who could be put into action to try punish them.

That’s a mountainous region with a limited road network. I suspect the SAA will advance to pinch out the HTS while the YPG moves to the southwest to seize Darat Izza in order to force the retreating HTS to take the winding muddy backroads where their slow moving convoys will be easy targets for Russian and Syrian aircraft.

Arginina Jamaica
Takaya Bol
Russia Crush Them Crush Them and let the Syrians have it Let them be Heroes.
Takaya Biol