Syrian government forces, assisted by the Russian military, have been expanding control over the eastern bank of the Euphrates River in the area of Deir Ezzor city.

The Syrian Arab Army (SAA) and the National Defense Forces (NDF) liberated Nashad village located north of Mazlum, on the road heading towards the border with Iraq. However, ISIS terrorists continued attacks against the SAA and the NDF in the area. The most fiercest clashes  were reported near Khusham.

Meanwhile, the Russian military established a 200-m long temprary bridge through the Euphrates River. The bridge allows to transfer cars, armoured vehicles and battle tanks from the western to the eastern bank and will play an important role in further government operations against ISIS east of Deir Ezzor. 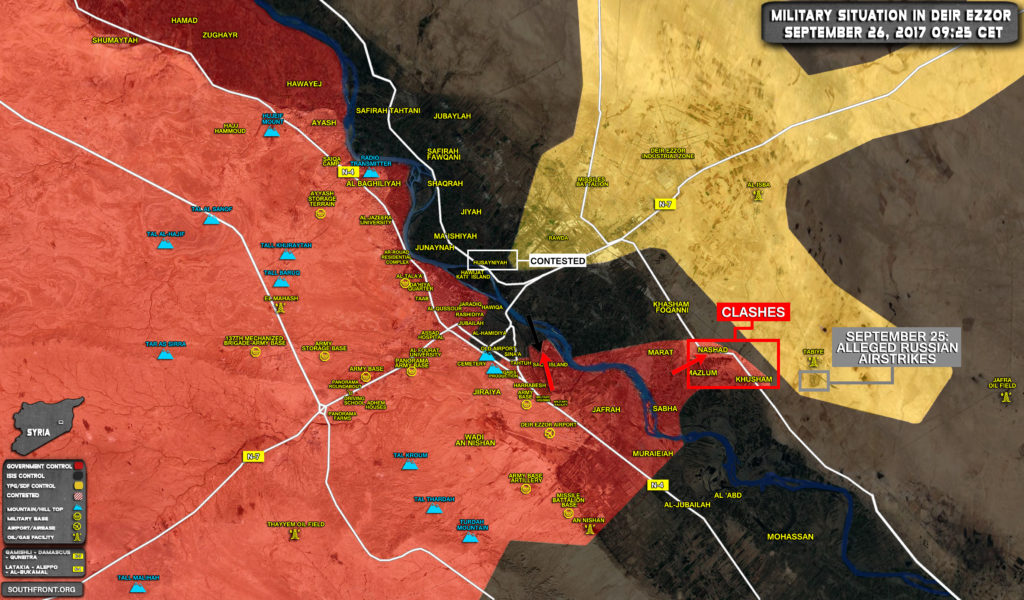 Looks set for conflict with the SDF – unavoidable and the US knows it; It’s all going to the latest Deep State plan otherwise why else challenge the SAA near Deir Azzor?

The Pentagon did everything it could to try and assist ISIS in capturing the Dier Ezzore township. In 2016 US warplanes bombed the critical hilltop defensive positions with entrenched armor in front of the town – which was immediately followed with major ISIS assault that effectively split the SAA defenders in city and airbase. The Pentagon’s rationale being, if the town fell to ISIS then US proxies could later occupy town and the entire Dier Ezzore province under pretext of fighting ISIS – basically the Plan B Syrian partition scheme. The resilience of the SAA garrison at Dier Ezzore was not expected by Pentagon planners – given that ISIS received considerable support from within eastern Euphrates Valley area. Likewise, US consistently did everything it could to impede the SAA advance toward Der Ezzore township and lifting the siege. The Syrian state certainly has really big problem with SDF/US SOF/Marines moving ever south on east bank of Euphrates – but is worth bearing in mind this is now only a half version of the problem that the US has repeatedly been trying to create with their partition agenda.

Excellent commentary Bob and thanks; much appreciated!

that was the Cia . They have the authority to requisition us Military assets at anytime. The Turkish F-16 was also requisitioned by Cia with Cia pilot. 2 A-10s attacked for 2 hrs in 2016 incident. Cia , the biggest drug dealer in the World has made & stolen $trillions . So they have near unlimited funds to hire all the mercenaries they need.

Yes, but there is something strange. SAA had have the opportunity to stop SDF for almost three week (by crossing the river and advance to northeast). However, it did really nothing about it, just big amusement that it was about to cross. Now SAA-Russia have a big problem with these USA troops (so called kurds) since they have blocked the SAA advance to northeast and Omar region. It seems to me that the main Pentagon-CIA ambitions were (are) oil fields in Omar.

Would suggest that the advance eastward and securing of Deir Ezzore township took a lot of SAA resources. Once there, SAA needed to expand and consolidate logistics and defensive lines – against ongoing ISIS resistance in surrounding areas. Basically catch their breath as major strategic goal had been realized – lifting the siege. This part of process always slows the momentum of an advance down. Meanwhile US/SDF cynically exploited the SAA’s serious fight against ISIS to launch a counter move southwards that appeared to encounter very little ISIS resistance. Simultaneously, and even more cynically, the US/SDF opened the up-river Tabbqa Dam sluice gates – to significantly raise the water levels in the Euphrates – to complicate SAA’s river crossings.

not the pentagon. it’s DEEPSTATE Cia renegades. Trump cut off funding weeks ago.

Oh yeah, Russia SAA are consolidating gains. Soon SDF-CIA will get it from all 4 sides . SAA-Russia-Iraq-Iran-Turkey will join to wipe them out, unless they retreat to previous positions. Already planned. Russia is flooding Syria with modern tanks APCs , weapons now. Air defenses are being consolidated. The deal with Israel & coalition is OFF now. reality time. Russia has the contracts for the Oil fields in East Syria.

totally trust the russian led coalition …. victories are coming …. as for the yankees=isis=sdf …. they will always lose for their dirty satanic warfare

Main US troops are not fighting. Trump cut-off funding & transferred them to northern Syria-Raqqa weeks ago. These are Cia operatives who also are armed-dressed like special forces. They are like” foreign legion of Cia. They will be wiped out very soon. Even pentagon blamed it on Cia.

How do they live with themselves knowing they are supporting terrorism?

Cia(deepstate) have been a renegade force in the world for decades. Biggest drug dealers on the planet. They do their own thing. & employ mercenaries of many nationalities. Us REAL americans cannot & would not fight with ISIS-Al Nusra. When OBAMA ordered the Bombing of Syria , our pilots refused , saying ” we will not be ISIS-Al Qaeda air force”. Many officers were retired demoted . 2016 Obama fired 287 Generals-Admirals . Even more than Clinton. They refused to do the bidding of Jihadis . The attacks on Deir Ezzoir were by the same 2 planes , both operated by Cia pilots. Like the Turkish F-16 was on a CiA surveillance flight by a Cia pilot, that’s how he got so close to the Mig-25 . Russians were informed. That’s why Putin said”stabbed in the back”. Far more complicated. We are fighting to take USA back as well. We DO NOT support DEEPSTATE( CiA). This is why Russians are more tolerant. It’s like Russia during Yeltsins last months. 2 groups controlled Kremlin. Same in USA. Getting better daily. Could a racial Civil war very soon. Jihadis-Zionists-Blacks-Liberals Versus Americans. It will be bloody. We Americans have always been against these wars & bombings. The DEEPSATE have been in control since killing Kennedy. Clintons, Bushes,Obama, etc,,

WE GOTTA STOP EM!! THEYRE GONNA KILL US ALL!!!

Good to see your still flying Charlie , especially after another reading of the Koran .

Looks like isis doesn’t have to worry about it’s back at least.

These kurds and the US are playing a dirty game against SAA/Russia by having talks to the terrorists of ISIS to block them whereever they can. Maybe and possibly they promised the surviving ISIS fighters to get hidden in their final days.

Syria has to many pockets and front lines, SDF helps in a matter of speaking by reducing the front line, which helps Syria regain more territory, and eliminate front lines permanently.

If the SDF has any chance, it has to do something to bring the SAA and allies in to direct hot conflict, so that they thin the SAA and allies, Syria, Russia and Iran are playing a longer game and are not going to start open hostilities with the SDF until they are ready or are given no choice.

exactly. Patience . Russians are accustomed to multiple front battles. they are biding their time. SDF will get theirs from 4 sides. Cia-NATO won’t help them then. They will abandon them like they always do. Patience. As long as SAA-Russia keep advancing , no worries.

It is not likely SDF will attack SAA. There are no real reports over the last years about this at all. The other way around, several reports exist.

Northern Syria is quietly building an economic system where they are not very dependent on other regions, full autarky is impossible however.

Still, were the KRG being blockaded by Iraq, Turkey and Iran, Northern Syria has enough food supplies to make sure they will not get hungry in the KRG and with the additional irrigated fields from the Khabur Valley, this will become even more unlikely,

Small scale industrialisation is taking off. Especially in Afrin there are many small industries relocated from Aleppo 2012-2013, “exporting” to the whole of Syria, in the midst of an economic blockade.

The SDF don’t have any control of the fields as they are still in the hands of CIA’s ISIS proxies , like I said they lack the manpower and can’t recruit anyone as they run off, US troops are in Raqqa these are PMC’s hired by the CIA why all that equipment was sent.

This is empty unsubstantiated talk and is no reply to my comment as I never even mentioned oil wells, Raqqah, manpower or anything.

I wrote about agriculture, industralisation and the (un) likelyhood of SDF attacking SAA.

You never went into just one syllable I wrote. Please, have this conversation with yourself.

It is good they are building infrastructure, so that it can be administered and regulated by the Syrian Government once it takes over, because it will take over, peacefully or not, partitioning big areas and sieging them making their semblance of independence mute.

Kurds are not thinking by themselves, they have become USA-puppets. They will do what USA tell them to do, that is.

USA has multi layer terrorist proxies fighting Syrian army at many fronts – Hama, Idlib, Deirezzor and near Golan also AlTanf Ukraine has stepped up the heat in Donbass to divert Russian attention away from DeirEzzor

Russia is fighting US and CIA Mossad proxies ISIS and FSA

Russia knows. Lots happening behind the scenes. Russia is flooding Syria with Tanks, APCs, supplies as we speak. Big push soon to come.

SAA should make another crossing on the Euprates, east or just south-east of Al-Jazeera University, then into Junaynah and Maishiyah!

US is constantly being accused of too much involvement in military conflicts and meddling in other peoples affairs, but in each and everyone of those involvements, they acquire enormous experience and better preparedness for the next battle. Events in Syria from my own observation, have shown that Russia needs to be involved more on International conflicts to gain valuable conventional and tactical and strategic experience. Russia has done a good job in Syria. But it is evident that there is also some tactical and strategic mistakes that directly led parties not liberating more territory.

Why do I see a cauldron being formed to trap the SDF/CIA/IS advance on the eastern side of the Euphrates? It must be very tempting. It will teach these invaders and upstarts a real lesson. I can see the Mad Dog rushing to Moscow to sort out the mess and get their boys out. It would be so nice for the whole world to see the CIA boys caught with their pants down and having a great time with the IS boys!

You mean like the Turkish agents among the “FSA” were caught in Aleppo last year?

Not very likely but be my guest dreaming in a phantasy world.

Do you even have a clue how many Coalition advisers the Russians killed with 1 strike 230 from various countries including Israel and the US, well known Emir Abu Zaid is a CIA /Mossad Agent.

The only one living in the fantasy world is you.

That’s the plan as why they are fed up with these clowns, they are done.

The brainless Daesh terrorist and other terrorist will probably join the Kurds/SDF and either attack the Syran forces thinking they won’t attack back or to get their masters to bomb the Syrian forces if they respond back.

Russia+SAA are such an awesome duo. In 24 months since you started your campaign, you have regained lots of territory and, you have also garnered world wide fame for your valiant fights with the RATS-Keep fighting; We love your attitude so much.

Yes, but all depends on what USA want Kurds to do. Kurds do to think by themselves, they do what USA tell them to do.

Its not that simple, they use eachother to reach their own goal.